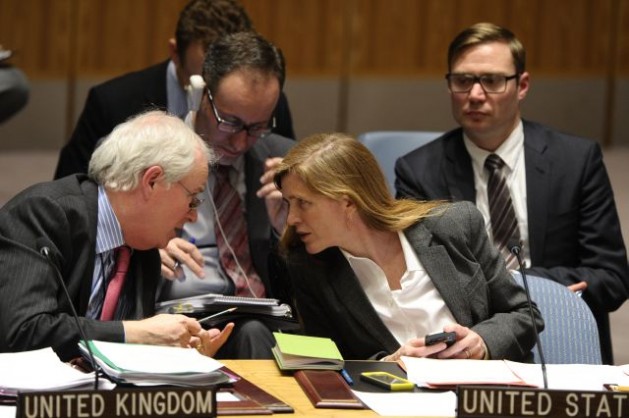 UNITED NATIONS, Mar 5 2014 (IPS) - When the crisis in Ukraine moved into the august chambers of the Security Council last week, it was virtually dead on arrival.

After two meetings last Saturday and Monday, the Council remained politically deadlocked, unable or unwilling either to adopt a resolution or come up with the lowest common denominator: a presidential statement with the concurrence of its 15 members.

"We have a predictable standoff in the Security Council, just as it happened in most previous phases of this long-running rivalry." -- Stephen Zunes

Still, James Paul, who served for more than 19 years as the executive director of the New York-based Global Policy Forum, does not rule out the significance of the United Nations in the ongoing political turbulence in Ukraine.

“This is a situation where multilateral diplomacy is needed and peacemaking is urgently required,” Paul told IPS.

The United Nations can be a venue for solutions, he pointed out, but not in the way the pundits usually think. Currently, Secretary-General Ban Ki-moon, while on the road in West Africa, is actively and remotely engaged in helping resolve the crisis. So is his deputy, Jan Eliasson, who is in Ukraine. Ban also named Robert Serry of the Netherlands as his Special Envoy to Ukraine.

On Tuesday, the former Dutch ambassador to Ukraine was confronted by an unidentified mob while he was on a visit to Crimea.

Stephen Zunes, professor of politics and coordinator of Middle Eastern Studies at the University of San Francisco, told IPS the end of the Cold War did not end the pattern of both Russia and the United States running roughshod over the U.N. Charter through illegal military intervention.

Barbara Crossette, a former U.N. bureau chief for the New York Times and currently U.N. correspondent for the Nation, told IPS when U.S. Secretary of State John Kerry and Russian Foreign Minister Sergei Lavrov worked together last year to broker the Syrian chemical weapons deal, the two of them proved the Security Council could be made to work as it should.

"So I have been wondering these last couple of weeks about where Lavrov now stands in Russian or U.S. eyes as he has to maneuver within Putin's confrontational policies just when he was playing a very positive role in both Syria and Iran," she said.

Both Kerry and Lavrov, who met last week to discuss Ukraine, are expected to meet again later this week in Paris to continue their talks.

Crossette said everybody she spoke with for a piece she wrote for the Nation thought to one degree or another that Lavrov is extremely smart and capable -- even crafty in how much credit he gave Kerry -- and constructive in his approach when he is free to be.

"Yesterday I heard a BBC correspondent in Geneva report on how surreal it seemed to see Lavrov start out a speech in moderation, and then suddenly switch to a Putinesque harangue 'as if he had written in the paragraph on the way over on the plane' -- or had it inserted for him."

So one question might be: does Lavrov have any significant role in this crisis? And who is writing the policy script for the Russian U.N. mission?

"If I were closer to the story, I would say that I get the sense that the Security Council is spinning its wheels, while the situation is playing out in Ukraine and Moscow [and the EU] while New York has a very small role, if any," she said.
“And, with both countries invested with the power of the veto, the United Nations remains powerless to stop it,” he said.

In an increasingly interdependent world, however, providing a forum to debate, expose, and challenge such aggression enables the United Nations to still have a positive impact, added Zunes, who has written extensively on the volatile politics of the Security Council.

Paul, who closely monitored the world body for nearly two decades, told IPS, “On Ukraine, we have a predictable standoff in the Security Council, just as it happened in most previous phases of this long-running rivalry.”

But this does not mean that the United Nations is out of the game, as many believe, he noted.

“The media feed on public meetings and statements, but in fact much diplomacy at the United Nations is informal and takes place in the corridors, as the saying goes,” he added.

The P5 (the Security Council’s five permanent members, namely the United States, Britain, France, China and Russia) meet constantly out of the limelight, over lunch or in conference rooms in their respective missions.

These meetings, he noted, “are an absolutely central mechanism for communication between the rivals and a potential means to resolve the conflict or key elements of it.”

Governments do not want to acknowledge this, since they are playing their most aggressive cards. Threats are being exchanged, outrage expressed, military forces moved, and so on, Paul said.

“But we can expect that an accommodation will be reached in absolute private – quite possibly, with the good offices of the U.N. as a means to strike a bargain inside Ukraine among the political factions,” he told IPS. “Then we may see the P5 present a resolution to the Security Council, as they did in the case of Syria, which at least partially defuses the situation.”

That is the real U.N. functioning in a very garrulous and unstable world. “Let us hope it works again this time,” he added.

At the Security Council meeting Monday, Ambassador Vitaly Churkin of the Russian Federation tried to justify his country’s military intervention as an attempt to protect “millions of Russians living in Ukraine.”

While both U.S. President Barack Obama and his Secretary of State John Kerry have dismissed these arguments, Churkin, recalling the October 1983 U.S. invasion of the Caribbean island of Grenada, pointed out Washington did so “to protect thousands of U.S. nationals living there.”

Zunes said Kerry’s admonishment to Russian President Vladimir Putin that “you just don’t invade another country on phony pretext…in direct, overt violation of international law,” while valid, rings hollow coming from a man who so vigorously supported the illegal U.S. invasion of Iraq on the phony pretext it had “weapons of mass destruction.”

He said the most severe human consequence resulting from the crisis in Ukraine may be that it could further undermine potential Russian cooperation with international efforts to resolve the civil war in Syria, thereby further prolonging that bloody conflict.

The negative fallout from the Russian-U.S. confrontation could not only impact on the peace talks on Syria but also on several other areas of cooperation between the two major powers, including Iran, North Korea and the Middle East.

Paul said in the Ukraine conflict, the great powers are clashing aggressively in the periphery of Russia in what might be called the battle for Eurasia.

There have been a number of related conflicts before, including the Balkan Wars, the war in Iraq and the Syrian conflict, he pointed out. The eastward expansion of the North Atlantic Treaty Organisation (NATO) and the European Union (EU) are related developments.

“The military conflicts related to this process are often presented in the media as binary conflicts between good and evil,” Paul said. But they are in fact cynical geopolitics, like the Great Game in the nineteenth century, he added.

The moves by the two sides have typically been reckless and a very serious danger to peace. Neither the Western powers nor the Russian government, are acting in support of democratic forces or just outcomes, he said.

“This is perfectly clear in Syria and it is equally true in Ukraine. So binary thinking is false thinking,” Paul said.