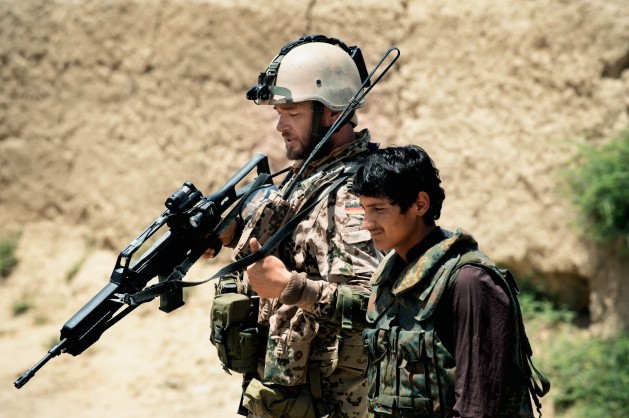 A soldier and an Afghan interpreter in a scene from the German film Inbetween Worlds. Credit: Wolfgang Ennenbach/Majestic.

BERLIN, Apr 23 2014 (IPS) - As foreign forces withdraw slowly from Afghanistan, they leave behind a vulnerable band of people who were their ears and guides on the ground. These people who served as interpreters, face a life of threats and uncertainties. Many have been killed.

Increasingly, linguists, media professionals, NGOs and advocacy groups are stepping up demands for international recognition of interpreters’ human rights to safety and sanctuary.

“Leaving them behind is tantamount to a death sentence,” Maya Hess, forensic linguist and head of the advocacy group Red T supporting translators and interpreters tells IPS. They must be granted protective asylum by the countries employing them, she says.

"Leaving them behind is tantamount to a death sentence."

Red T in collaboration with the International Association of Conference Interpreters and the International Federation of Translators published the first multilingual international Conflict Zone Field Guide in 2012, with new translations being added continually. The document, a reference source in the UK’s Ministry of Defence publication ‘Linguistic Support to Operations’ spells out best practices between host nation linguists and users of their services.

Indeed, formalising the rights to safety and security provisions for civilian interpreters and translators in war zones is long overdue.

Between 2007 and 2009, says Hess, Military Essential Personnel, a U.S. defence contractor, confirmed a death toll of 30 interpreters in 30 months. In Iraq, British forces lost 21 interpreters over a 21-day period.

Many more have been injured and have suffered life threats and persecution. The Bundeswehr, the German military, has received more 700 such claims from local employees.

Noor Ahmad Noori (29), an Afghan interpreter who worked formerly for The New York Times in Afghanistan, is among the latest casualties in a long trail of bloodshed among interpreters.

He was abducted and later found beaten and stabbed to death near Lashkar Gah, a Taliban stronghold, in January.

Jawad Wafa (25) a Bundeswehr interpreter with the Kunduz Task Force within the International Security Assistance Force (ISAF) was found strangled in the boot of a parked vehicle on Nov. 24, 2013. His death came a month after the German armed forces’ withdrawal.

Despite repeated threats he faced, and an entitlement to protective asylum, his documents were not expedited in time.

Wafa had been invited to the Bundeswehr headquarters in Mazar-e-Sharif, and his name was on the list of the 182 permits announced in October 2013 by the Federal Minister for the Interior, Hans Peter Friedrich.

A grinding maze involving a paper shuffle between the Foreign Office in Berlin, the Federal office for Migration and Refugees – which expedites eligibility permits – and the German embassy in Kabul, did not help Wafa.

In 2008, Matt Zeller, a U.S. army captain was saved “in extremis” by Janis Shinwari, his interpreter who shot down Taliban snipers just before they could pull the trigger on Zeller. When his name ended on a Taliban death list, he was swiftly given a U.S. visa thanks to Zeller’s efforts.

A year later the U.S. Congress passed the 2009 Afghan Allies Protection Act, which made 7,500 visas available to Afghan employees – mainly translators and interpreters.

The German government acknowledged in October 2013 that translators and interpreters are a “high-risk category” because of their particular “visibility” in their role as communication brokers for the military and police. This was an important, yet insufficient step forward.

“While the intention of the German authorities to change their visa policy and grant permits to Afghan interpreters and ancillary staff may be laudable, the fact that only a few interpreters have made it to Germany since the announcement is appalling,” says Hess.

In February this year Bundeswehr interpreters Aliullah Nazary (26) and Qyamuddin Shukury (25) landed relieved and elated in Hamburg after facing months of life threats. Chilling messages were dropped on their doorsteps. “You German spy, you wait for your death now”, one read.

Approximately 500 translators and interpreters are believed to have been employed by German forces and government bodies. The latest Foreign Office figures obtained by IPS confirm that 296 eligibility permits, or Aufnahmezusagen, and 131 immigration visas have been issued, and that 107 Afghan claimants have arrived in Germany.

The low number of arrivals may be due to the transition in Afghanistan. In some cases applicants receive financial compensation after their contracts expire. Bernd Mesovic, spokesperson for Pro Asyl, says many may be holding on to their German permits in the hope that the security situation will improve in Afghanistan and Taliban threats subside. “We recommend that the process be further expedited,” says Mesovic.

“We urgently need a paradigm shift in how translators and interpreters are treated and perceived,” says Hess. “I do hope that the powers that be increasingly wake up to how dangerous this profession is, and that safe houses and security will be provided for linguists until they are able to leave.”

A recent German war drama, titled ‘Inbetween Worlds’, which centres on the story of an 18-year-old Afghan interpreter for a German squad, has brought home the plight of interpreters in the war zone to many Germans.