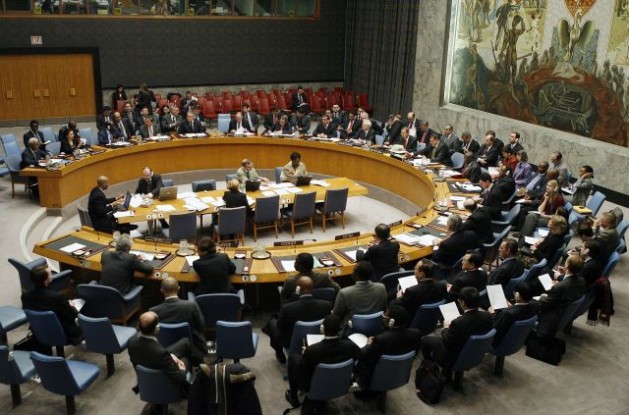 While the resolution adds to the global WMD non-proliferation regime, there are concerns among several states about the instrumental use of the Security Council to bypass duly constituted multilateral negotiating forums. Credit: UN Photo/Paulo Filgueiras

UNITED NATIONS, May 7 2014 (IPS) - The United Nations claims that a key Security Council resolution adopted unanimously back in 2004 has been instrumental in keeping weapons of mass destruction (WMDs) from the hands of terrorists and insurgent groups worldwide.

At a meeting Wednesday to mark its 10th anniversary, Deputy Secretary-General Jan Eliasson said resolution 1540 has helped make important inroads against the proliferation of nuclear, biological and chemical (NBC) weapons over the last decade.

The five major nuclear powers have consistently asserted they don't want WMDs to fall into the "wrong hands" - a code phrase for terrorists and insurgent groups.

But that only tells part of the story, he said, expressing regrets over “the setbacks and disappointments”, including the recent use of chemical weapons in Syria.

“However, through multilateral agreement, over 90 percent of Syria’s chemical weapons have been removed from the country even as the conflict has intensified,” Eliasson added.

A U.N. team investigating the use of these deadly weapons in Syria last year found “clear and convincing evidence” of Sarin gas attacks against civilians, including children.

But the team was not mandated either by the General Assembly or the Security Council to probe whether the weapons were used by government military forces or armed insurgents – leaving the question of accountability wide open.

The mandate was only to determine whether chemical weapons had been used, not by whom.

Tariq Rauf, director Disarmament, Arms Control and Non-Proliferation Programme at the Stockholm International Peace Research Institute (SIPRI), told IPS the resolution was adopted a decade ago to close the gaps in the domestic legislation of member states.

The primary aim was to prevent the spread or access to WMD materials and technologies to non-state actors such as terrorist groups or criminals through the implementation of legislation providing for effective controls and criminal penalties.

He said the resolution does not duplicate nor impinge upon existing multilateral non-proliferation treaties and organisations, including the Nuclear Non-Proliferation Treaty (NPT), the International Atomic Energy Agency (IAEA), the Chemical Weapons Convention (CWC) and the Organisation for the Prohibition of Chemical Weapons (OPCW).

Eliasson told Wednesday’s meeting it is critical for every country to implement the resolution.

“Terrorists and traffickers tend to target countries whose customs, borders, imports, exports, ports and airports are less well monitored or controlled,” he said.

One promising trend, he pointed out, is the preparation of voluntary national implementation action plans.

At the recent Nuclear Security Summit in The Hague, 32 countries released a joint statement reaffirming a commitment to submit such action plans to the ‘1540 Committee’ coordinating the implementation of the resolution.

The Western powers have expressed concern that terrorist groups, specifically Al-Qaeda, may be attempting to acquire WMDs.

Still over the last 10 years following the adoption of the resolution, North Korea has gone nuclear while Iran is accused of trying to develop nuclear weapons (which it vehemently denies).

And Saudi Arabia has threatened to go nuclear if Iran joins the group of nine nuclear weapons states: including the five permanent members (P5) of the Security Council, namely, the United States, Britain, France, China and Russia, along with India, Pakistan, Israel and North Korea.

The five major nuclear powers have consistently asserted they don’t want WMDs to fall into the “wrong hands” – a code word for terrorists and insurgent groups.

But Secretary-General Ban Ki-moon says “there are no right hands for wrong weapons.”

The anti-nuclear activists, who call for a total elimination of WMDs, say there are “no right hands or wrong hands” for nuclear weapons which should be removed from everyone’s hands.

Rauf told IPS the resolution adopted under chapter VII of the U.N. Charter is mandatory for all U.N. member states. It complements but does not replace nor is it a substitute for multilaterally negotiated arms control treaties.

While the resolution adds to the global WMD non-proliferation regime, there are concerns among several states about the instrumental use of the Security Council to bypass duly constituted multilateral negotiating forums such as the Conference on Disarmament, and the U.N. General Assembly, where more or all states are represented.

He said the Security Council is not considered a globally democratic body as it has permanent members with a veto and a very small number of other states elected for two year terms.

In sum, the resolution is a useful instrument but it cannot be compared in importance or legitimacy to global WMD treaties since such treaties have been duly negotiated in open multilateral forums where member states have a say and thus have greater legitimacy and authority, he declared.