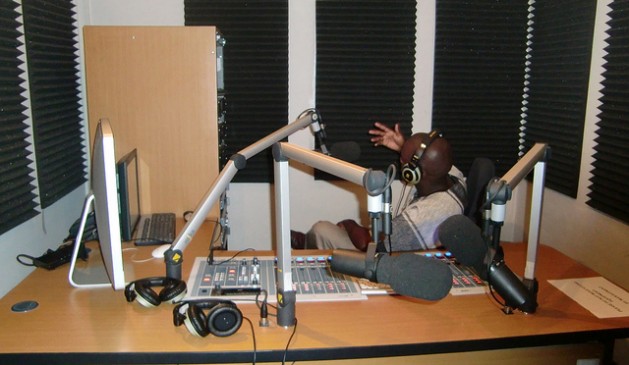 Shona evolved as a street language in Zimbabwe after this country introduced a policy that compelled all broadcast stations to air 75 percent of locally-produced material. Credit: Jeffrey Moyo/IPS

HARARE, Jun 10 2014 (IPS) - “Ndipei sand dzangu,” (give me my hammers) sings Zimbabwean artist Winky D. He may be singing in Shona, the local language spoken by some 80 percent of Zimbabweans, but his Shona is different. It’s Street Shona. So what he really means, loosely translated, is that someone is exceptionally good at what they do and therefore needs to be recognised for this.

This southern African nation’s local language, Shona, has taken on an artistic form which has seen the language transform.

Shona, has its origins in the Bantu languages and is both a written and spoken language with dialects that include Zezuru, Korekore, Ndau and Manyika.

The evolution of Shona as a street language in Zimbabwe has become synonymous with Urban Grooves, a Zimbabwean music genre which became popular when this country introduced a policy that compelled all broadcast stations to air 75 percent of locally-produced material.

“Our language, Shona, is now advanced, we are at a different level,” Tazvitya Kaseke from Zimbabwe’s capital, Harare, tells IPS as he describes the evolution of Shona into a form of art.

Although Urban Grooves is a form of music that has a largely youthful following, terms derived from this genre are not unique to the youth. Older people have also been known to use these terms.

An example is the current phrase “wotoshaya kuti zviri kufamba seyi” (not sure why things are going the way they are going), which has become popular in Harare. This phrase is believed to have been started by local comedian Richard Matimba.

Stanley Maniste, a youth based in Chitungwiza, a satellite town south of Harare, says street language here may have been made more popular by Urban Grooves but it was actually born on the streets.

“Music is just a vehicle that makes the current affairs of the street more popular. Street language is actually born in the streets of townships like Chitungwiza and Mbare,” Maniste tells IPS.

McDonald Nyathi, a budding artist also based in Chitungwiza, attributes the evolution of Shona to society itself and adds that music and the media create a platform for society’s views to be aired.

“I believe that this is a two-way street. Society creates and then artists and the media air the creation of society. But sometimes artists also create and these then become popular on the streets,” Nyathi tells IPS.

Music producer Lloyd Goredema links the increase in colloquial words and phrases to the economic slump in Zimbabwe.

“When the economy hit rock bottom people had to find ways of sustaining their livelihoods. This caused an increase in the number of artists, popularly known as urban groovers,” he tells IPS.

“This is also a result of the government’s 75 percent local content policy, which was introduced in 2002. The country didn’t have money for importing music by international artists, hence the airwaves were inundated with music that showed street and township life in Zimbabwe,” Goredema says.

Nyathi says that street language may not have been obvious prior to 2002, but it existed prior to this.

“Now that the channels have opened up it appears as if street language has suddenly increased,” Nyathi says.

Street language is also commonly derived from other sources like the ever increasing number of touts (popularly referred to as mahwindi) who work around taxi ranks in Zimbabwe’s major cities.

Businesses that advertise using both print and broadcast media have also added to the hype. A colloquial term “zva zvinhu” (these have become good things) has been made popular by a bread advertisement.

A study titled “What’s new in Shona street lingo?” conducted by Shumirai Nyota and Rugare Mareva, shows that street language in Zimbabwe exists because of a number of factors.

“Shona lingo consists of highly informal words or phrases which have been coined or formed by mixing languages. Speakers of Shona lingo use it in their informal discussions on any subject matter, especially on topical issues in Zimbabwe, such as politics, socio-economic issues and HIV. The vehicles or channels used to transmit street lingo include, emails, cell phone text messages, Shona lingo chat forums and urban groove music,” the study reveals.

“The language starts in the streets and backyard recording studios of the major cities, especially Harare. It’s easy for the language to get to the rural areas because people travel regularly and because of the various technology which enables a lot of the language and trends to travel,” Tawanda Huhlu, an aspiring musician from Harare, tells IPS.

The phenomenon of street or colloquial language is not unique to the people of Zimbabwe but research has also shown that this trend is prevalent in other African countries. A  2009 study by a German researcher Flora Veit-Wild, called “Zimbolicious – the creative potential of linguistic innovation”, states that similar tendencies can be observed in the big cities of east, west and central Africa.

“Sheng, a mixture of Swahili and English is a language variety that has developed among young people in Nairobi, while Camfranglais, a bland of French, English and African languages, is spoken by mostly urban Cameroonians,” Veit-Wild notes in the study.

Artists see street language as an art as well as a glue that unites people.

“This kind of language unites us as a nation. We speak a common language, especially as young people and this in some ways creates an identity for us,” Goredema says.