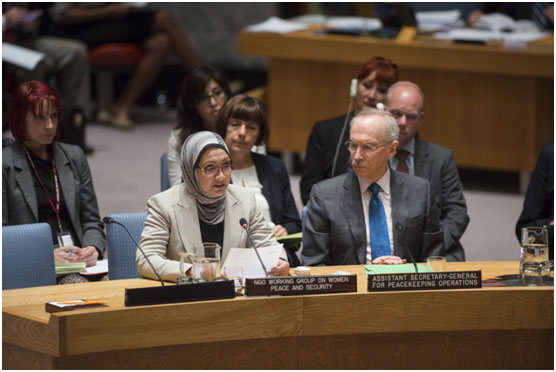 UNITED NATIONS, Oct 29 2014 (IPS) - Addressing the Security Council Tuesday, several speakers emphasized that women’s involvement in peace building and conflict prevention is as important as ever as the nature of conflict evolves.

U.N. Women Executive Director Phumzile Mlambo-Ngcuka told delegates the changing nature of conflict was affecting women and girls,
“As we look around at a world in crisis, there is a sense that we are experiencing not simply an increase in violence and insecurity, but a shift in the nature of conflict itself”, she told the Security Council.

“In more and more parts of the world – Iraq, Northern Nigeria, Syria, Somalia, and Mali, to name a few – violent extremists are taking control of territory, and directly threatening and targeting women, girls, and their communities. This is the terror that contributes to the high levels of displacement we are discussing today.”

In a statement to the Security Council, Secretary General, Ban Ki-moon said “the immense human and financial cost of conflict is starkly evident in the situation of refugees, asylum seekers and internally displaced persons.

“Unprecedented levels of displacement are testing global commitments to address the needs of women and girls, ensure their protection and engage their participation in conflict prevention, resolution and peacebuilding.”

Over 50 million people were displaced in 2013 the most since World War Two, a significant increase mainly influenced by conflict in Syria.

Ban said the international community has made progress in moving “beyond viewing women as only victims of conflict to seeing them as agents of peace and progress.“

He said that women are now increasingly involved in “mediation, peacekeeping and peacebuilding” with support from the Security Council.

However although 2014 saw the first woman head a UN Peace Keeping mission, in Cyprus, Ban also reported that over 97% of U.N. military peacekeepers and 90% of police personnel are still men.

Suaad Allami, from the Working Group on Women and Peace and Security said she saw women and girls in her daily work who were traumatised by the violence they had been forced to flee.

Allami called for a “survivor centred approach” that would “build the capacity of law enforcement agencies to respond to sexual and gender based violence. Including in displaced settings.”

She said that this should include recruiting women to senior policing roles.

Allami told the Security Council: “All perpetrators including in South Sudan and Somalia, where sexual violence by all sides of the conflict is at horrific levels must be held to account under national and international human rights and humanitarian law.”

She also said conflict prevention should lie at the core of the women peace and security agenda, “All solutions must address the root causes of conflict and displacement. This includes addressing disarmament and demilitarisation.”

In his annual report on the implementation of Security Council Resolution 1325 on Women Peace and Security, Ban noted that the resolution was adopted because of the “the persistent efforts of women peace activists and civil society organizations from various regions who aimed to end the horrors of war and militarism and to ensure the effective participation of women in all decisions relating to peace and security.”