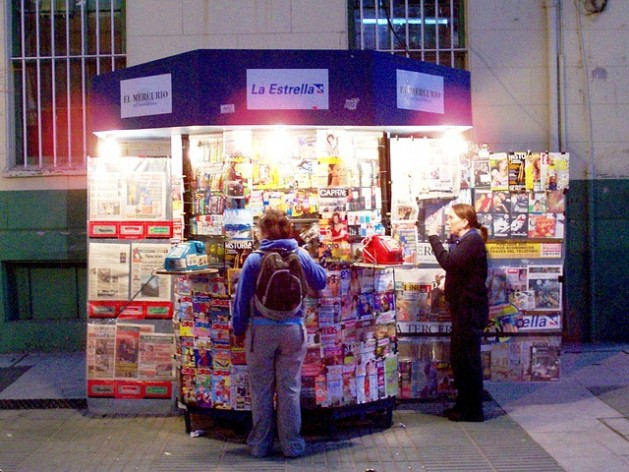 SAN JUAN, Nov 5 2014 (IPS) - A multi-million-dollar grant from a major media conglomerate to a communications school here has been hailed by some as a shining example of corporate philanthropy working to improve the quality of journalism.

But others view it as a worrisome case of undue influence of media corporations on the formation of journalists.

“Gallardo represented the worst of corporate strategies, that is, those measures that compromise journalism with greed and market routines in detriment of the interests of the people and their most noble hopes." -- Luis Fernando Coss

GFR Media and USC already have a history of collaboration. Together they run Agenda Ciudadana, a roundtable of business and civil society leaders that aims to enhance citizen participation in public affairs, and the PR Center for Press Freedom (CLP), founded and funded by El Nuevo Día, which is housed in the USC Campus.

“This centre was founded to educate the citizenry about freedom of expression, which is our dearest human right,” said CLP director Helga Serrano.

“We encourage people to read the media with a critical eye,” said Serrano. “The Ferrés have been totally supportive of us on that. An alert and questioning public pushes the media out of their comfort zone.”

Serrano does not believe that accepting five million dollars from GFR Media and having the school renamed after the Ferré-Rangel family compromises the institution in any undue way.

“In the United States this is a very common practice. You see plenty of buildings and institutions named after philanthropists over there,”Serrano told IPS. “Columbia School of Journalism in New York, for example, was founded by Mr. Pulitzer, a newspaper publisher and creator of the journalism prize named after himself.

“The [USC] trustees approved the name change, because the grant is a major contribution to the school’s development.”

But others believe the donation will undermine the Communication School’s independence and intellectual integrity.

“This grant [from GFR Media] means that the poorly formed communicators graduated from the school will have to carry the message and editorial line of the Ferré-Rangels and their publications,” said a source in the USC faculty that refused to be identified. This grant “contradicts the institution’s mission, which is to form persons with intellectual liberty, with critical thinking.”

According to “Un Diario Amable”, a critical 2009 documentary about El Nuevo Día, between 2001 and 2005 the Ferré-Rangel group of companies had profits of over 100 million dollars. And yet, in February 2007 El Nuevo Día laid off some 40 employees.

According to the PR Journalists Association (ASPPRO), after the layoffs the remaining staff writers have lived in a state of fear and uncertainty, and are afraid to publicly denounce their working conditions.

GFR Media is now one of ASPPRO’s top donors.

El Nuevo Día is a member of the Inter American Press Association (IAPA), an organisation that has frequently been accused of right-wing bias and political activism. Chilean entrepreneur Agustín Edwards, owner of the El Mercurio newspaper and IAPA president from 1968 to 1969, met with U.S. Central Intelligence Agency director Richard Helms to discuss ways to undermine the government of Chilean president Salvador Allende, who was overthrown by a right-wing military coup in 1973.

Mauricio Gallardo, a close associate of Edwards, was executive director of El Nuevo Día from 2007 to 2009. He had previously worked for El Mercurio as editor of its Sunday magazine. Gallardo is currently back in Chile directing La Segunda, another newspaper owned by the Edwards family.

Gallardo was allegedly fired from El Nuevo Día shortly after he was featured in “Un Diario Amable”.

Good riddance, according to the documentary’s executive producer, Luis Fernando Coss: “Gallardo represented the worst of corporate strategies, that is, those measures that compromise journalism with greed and market routines in detriment of the interests of the people and their most noble hopes. Corporate colonialism suffered a hard setback.”

From 1986 to 1998, Coss directed Diálogo, the University of Puerto Rico’s monthly newspaper. He now directs 80 Grados, an online magazine.

IPS repeatedly tried to contact Héctor Peña, director of El Nuevo Día’s opinion columns section and IAPA board member, for comment but he did not respond by deadline.

“Criticisms of IAPA come from all sectors,” said Ricardo Trotti of IAPA.

Trotti, who is IAPA’s press freedom coordinator, told IPS that the followers of Peru’s Fujimori, Paraguay’s Stroessner, Chile’s Pinochet, and Argentina’s Menem, and the Nicaraguan contras have all considered the organisation to be “unbearably to the left”; and the leftist followers of Ecuador’s Correa, Venezuela’s Chavez and Cuba’s Castro accuse IAPA of undermining democracy while serving imperialism and colonialism.

He also pointed out that in the U.S., both Democrats and Republicans have made similar accusations of bias against the organisation.

“IAPA has always criticised and denounced press freedom violations from all kinds of governments,” said Trotti. He added that the organisation cannot be held responsible for the behaviour of each and every member.