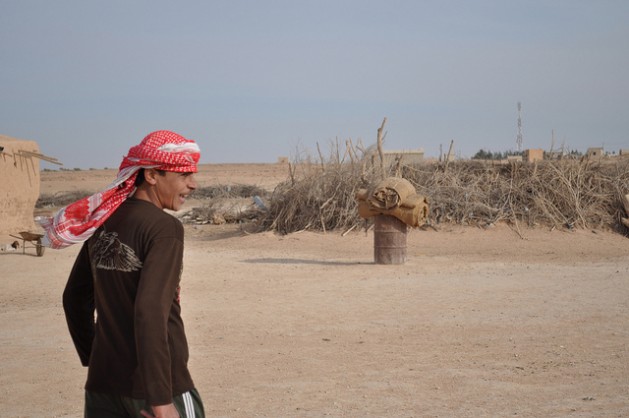 On a drought-hit farm in Syria, December 2010. Credit: Caterina Donattini/IPS

UNITED NATIONS, Mar 2 2015 (IPS) - Was the four-year-old military conflict in Syria, which has claimed the lives of over 200,000 people, mostly civilians, triggered at least in part by climate change?

A new study by Columbia University’s Lamont-Doherty Earth Observatory says “a record drought that ravaged Syria in 2006-2010 was likely stoked by ongoing man-made climate change, and that the drought may have helped propel the 2011 Syrian uprising.”

"Added to all the other stressors, it helped kick things over the threshold into open conflict." -- climate scientist Richard Seager

Described as the worst ever recorded in the region, the drought is said to have destroyed agriculture in the breadbasket region of northern Syria, driving dispossessed farmers to cities, where poverty, government mismanagement and other factors created unrest that exploded in spring 2011.

“We’re not saying the drought caused the war,” said a cautious Richard Seager, a climate scientist at Lamont-Doherty Earth Observatory, who co-authored the study.

“We’re saying that added to all the other stressors, it helped kick things over the threshold into open conflict. And a drought of that severity was made much more likely by the ongoing human-driven drying of that region.”

Doreen Stabinsky, a professor of Global Environmental Politics at College of the Atlantic, Maine, U.S., told IPS that obviously the Syrian war is a complex situation that cannot be explained solely due to drought and the collapse of agricultural systems.

“Yet we know that agricultural production will be one of the first casualties of the climate catastrophe that is currently unfolding,” she noted.

Indeed, she said, climate change is not some far-off threat of impacts that will happen in 2050 or 2100.

“What this research shows is that climate impacts on agriculture are happening now, with devastating consequences to those whose livelihoods are based on agriculture.

“We can expect, even in the near-term, more of these types of impacts on agricultural systems that will lead to large-scale migrations – within countries and between countries – with significant human, economic, and ecological cost,” she added.

And what this research shows more than anything is that the global community should be taking the climate crisis – and its impacts on agricultural production – much more seriously than it has to date, said Stabinsky, who is also a visiting professor of climate change leadership at Uppsala University in Sweden.

Asked about Syria, Dr Colin P. Kelley, lead author of the study, told IPS: “From what I’ve read , there is little evidence of climate change (precipitation or temperature) contributing to the Darfur conflict that erupted in 2003.

“I know this has been a controversial topic, though,” he added.

According to the new Columbia University study, climate change has also resulted in the escalation of military tension in the so-called Fertile Crescent, spanning parts of Turkey and much of Syria and Iraq.

It says a growing body of research suggests that extreme weather, including high temperatures and droughts, increases the chances of violence, from individual attacks to full-scale wars.

Some researchers project that human-made global warming will heighten future conflicts, or argue that it may already be doing so.

And recent journalistic accounts and other reports have linked warfare in Syria, Iraq and elsewhere in part to environmental issues, especially lack of water.

The new study, combining climate, social and economic data, is perhaps the first to look closely and quantitatively at these questions in relation to a current war.

The study also points out the recent drought affected the so-called Fertile Crescent, where agriculture and animal herding are believed to have started some 12,000 years ago.

But using existing studies and their own research, the authors showed that since 1900, the area has undergone warming of 1 to 1.2 degrees Centigrade (about 2 degrees Fahrenheit), and about a 10-percent reduction in wet-season precipitation.

“They showed that the trend matches neatly with models of human-influenced global warming, and thus cannot be attributed to natural variability,” according to the study.

Further, it says global warming has had two effects.

First, it appears to have indirectly weakened wind patterns that bring rain-laden air from the Mediterranean, reducing precipitation during the usual November-April wet season.

Second, higher temperatures have increased evaporation of moisture from soils during the usually hot summers, giving any dry year a one-two punch.

The researchers conclude that an episode of this severity and length would have been unlikely without the long-term changes.

Other researchers have observed the long-term drying trend across the entire Mediterranean, and attributed at least part of it to manmade warming; this includes an earlier study from the U.S. National Oceanic and Atmospheric Administration.

The Intergovernmental Panel on Climate Change has predicted that the already violent Mideast will dry more in coming decades as human-induced warming proceeds.

The study’s authors say Syria was made especially vulnerable by other factors, including dramatic population growth— from 4 million in the 1950s to 22 million in recent years.

Illegal drilling of irrigation wells dramatically depleted groundwater that might have provided reserves during dry years, said co-author Shahrzad Mohtadi, a graduate student at Columbia’s School of International and Public Affairs (SIPA) who did the economic and social components of the research.

The drought’s effects were immediate. Agricultural production, typically a quarter of the country’s gross domestic product, plummeted by a third, according to the study.

As many as 1.5 million people fled from the countryside to the peripheries of cities that were already strained by influxes of refugees from the ongoing war in next-door Iraq.

In these chaotic instant suburbs, the Assad regime did little to help people with employment or services, said Mohtadi. It was largely in these areas that the uprising began.

“Rapid demographic change encourages instability,” say the authors. “Whether it was a primary or substantial factor is impossible to know, but drought can lead to devastating consequences when coupled with preexisting acute vulnerability.”