A Chimera in Growing Cooperation Between China and Brazil 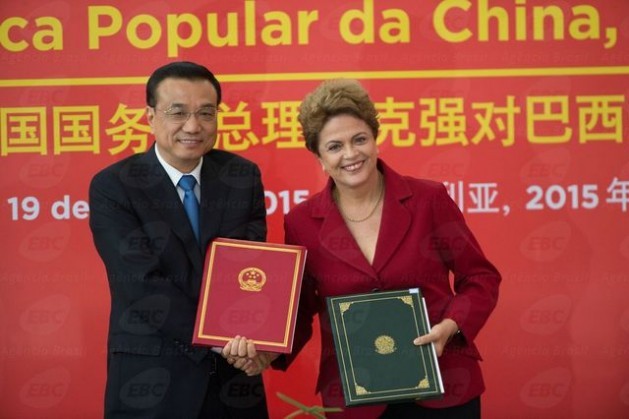 Chinese Prime Minister Li Keqiang with his host, Brazilian President Dilma Rousseff, during the ceremony for the signing of agreements that ended the Chinese leader’s two-day visit to Brasilia, on May 19. Credit: EBC

RIO DE JANEIRO, May 21 2015 (IPS) - A total of 35 agreements and contracts were signed during Chinese Prime Minister Li Keqiang’s visit to Brazil, as part of the growing ties between the two countries. But there is one project that drew all the attention: the Transcontinental Railway.

The railroad will stretch over 5,000 km from the port of Açú, 300 km northeast of Rio de Janeiro, to a port in Peru. The Peruvian port will be selected after feasibility studies are carried out to determine the viability of specific sites, according to the memorandum of understanding signed by Brazil, China and Peru.

“It’s crazy,” said Newton Rabello, a professor at the Federal University of Rio de Janeiro who specialises in transportation systems. “The 4,000-metre barrier of the Andes mountains and the high costs make the project unviable from the start,” he told IPS.

“Railroads don’t like rugged terrain; all of the ones laid in the Andes mountains were closed down and the so-called bullet train between Rio de Janeiro and São Paulo didn’t work because of the absurd costs,” explained Rabello, an engineer with a PhD from the Massachusetts Institute of Technology (MIT).

He argued that other railways proposed for creating a connection between the Atlantic and Pacific oceans won’t work, for the same reasons – including the ones that cross the areas of greatest economic density such as South America’s Southern Cone region, where the only thing needed is to build stretches to complement already existing railways.

Other accords signed by President Dilma Rousseff and Li, or by some of the 120 businesspersons who accompanied the Chinese leader, are more concrete and opportune for the Brazilian government, which is facing a fiscal adjustment and does not have the resources to carry out necessary infrastructure projects and revive the stagnant economy.

The accords involve a total investment by China of 53 billion dollars – a figure mentioned by the Brazilian government without confirmation from China or a detailed breakdown because it covers initiatives in different stages – some still on paper, such as the interoceanic rail corridor, and others which will go out to bid.

But the participation of Chinese companies and capital will make it possible to jumpstart many infrastructure projects that have been delayed or stalled, such as railroads for the exportation of the soy grown in Brazil’s Midwest and Northeast regions.

A 50 billion dollar fund will be established toward that end by the Industrial and Commercial Bank of China (ICBC) and Brazil’s Caixa Econômica Federal.

Industry, meanwhile, will be the prime focus of the government’s Bilateral Productive Cooperation fund. China will provide 20 to 30 billion dollars and Brazil will later decide what its quota will be.

The industrialisation of Latin America is one aim of China’s development finance, Li said in Brasilia, in response to complaints about the asymmetry of trade relations, with Latin America’s exports practically limited to commodities.

Li’s visit to Brazil represented the first part of his first Latin America tour, which is taking him to Colombia, Peru and Chile until his return home on May 26. 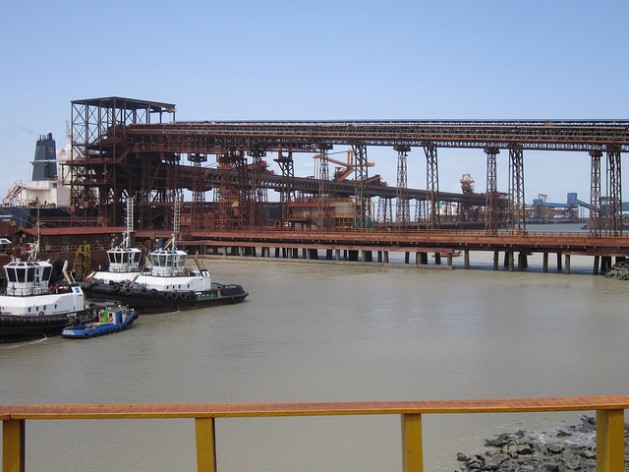 The Ponta da Madeira bridge in Northeast Brazil, which will be connected with iron ore mines by means of a new railroad that will transport the mineral to the ships that set out from this region for China. Credit: Mario Osava/IPS

Another beneficiary of the agreements is Brazil’s mining giant Vale, included in a four billion dollar credit line for the purchase of ships to transport 400,000 tons of iron ore.

Oil and iron ore make up nearly 80 percent of Brazil’s exports to China. Hence China’s interest in improving this country’s transport infrastructure, to reduce the cost of Brazil’s exports, besides providing work for China’s construction companies now that domestic demand is waning.

Another agreement opens up the Chinese market to exports of cattle on the hoof from Brazil.

Brazil has exported some industrial products to China, mainly from the aeronautics industry. The sale of 22 planes from the Empresa Brasileira de Aeronáutica (Embraer) to a Chinese company was finalised during Li’s visit. A prior accord had established the sale of a total of 60.

Bilateral trade amounted to 77.9 billion dollars in 2014, with a trade surplus for Brazil, although it is shrinking due to the fall in commodity prices. The goal is to reach 100 billion dollars in trade in the near future, according to the Chinese prime minister.

The stronger relations, especially the increase in Chinese investment, “could be positive for Brazil, but we have to control our enthusiasm over the closer ties,” said Luis Afonso Lima, president of the Brazilian Society of Transnational Corporations and Economic Globalisation.

“China may have more to gain than us in this process: they are seeking suppliers (of raw materials) throughout Latin America, but without any urgency because their economy has slowed down; they can think things through strategically, with a view to the long term,” the economist told IPS.

“With more experience built up in their ancient culture, they know what they want – they are seeking more global power, and alliances with emerging countries from other regions, like Brazil, expand their influence,” he said.

With nearly four trillion dollars in foreign reserves, they can finance the development of any country, he said.

Meanwhile, Brazil, “which is in an emergency situation and in need of short-term financing, is merely reacting, without any strategy,” he said. “That is why the enthusiasm over Chinese investment worries me; we could end up frustrated, and worse, it could expose us to manipulation, like what happened with Argentina.”

Lima said Brazil had already been frustrated once: when Brazil officially recognised China as a market economy in 2004, offering it better trade conditions, China failed to live up to its commitment of 10 billion dollars in investment in industry in this country.

Another disappointment was the promise to install in Brazil a 12 billion dollar plant by the Chinese company Foxconn, to produce electronic devices. In the end the investment amounted to less than one-tenth of what was promised when the deal was announced in 2011.

“China stopped putting a priority on exports and is stimulating domestic consumption, while Brazil is in the opposite situation, with a reduction in internal demand and a greater export effort, which opens up a possibility of synergy between the two countries,” Lima said.

But clear goals are needed to take advantage of this opportunity, he said, “along with long-term planning with clearly defined priorities, the necessary reforms, and productive investment in manufacturing….but the Brazilian government seems to be lost.”

The Transcontinental Railway is designed “to prioritise exports of soy and minerals” to Asia, mainly China, he said.

“Historically railroads led to a major reduction in costs for land transport, replacing draft animals and carts,” said Rabello. “Costs fell from six to one, and even lower in some cases, and that stuck in the minds of people who still see trains as a solution, because they have no idea of today’s costs.”

As a result, several parallel railroads are being built in Brazil, running towards the centre of the country, where agricultural production, especially of soy, is on the rise. Where there was only one precarious railway for carrying exports they now want to offer three or four alternatives, or even more, such as the interoceanic rail corridor, which is “excessive,” the professor said.