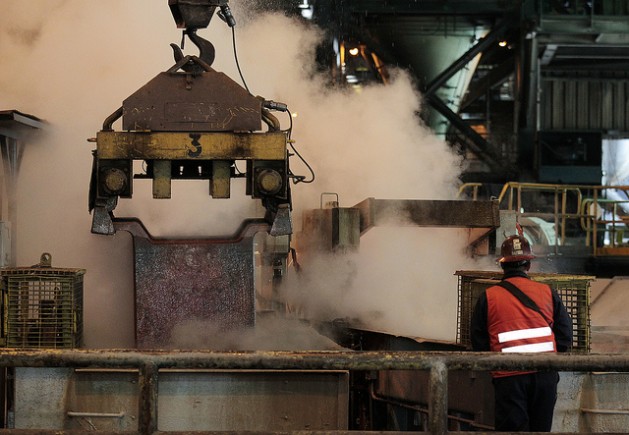 A smelter at the El Teniente mine, which produces 37 percent of Chile’s copper. Credit:Marianela Jarroud/IPS

“As commodity prices decline, Latin American policy-makers will wish that they had used some of the benefits of the commodity-boom to diversify into other sectors,” Kevin Gallagher, professor at Boston University and author of a recent China-Latin America bulletin published by Boston University’s Global Economic Government Initiative (GEGI), told IPS.

"That the prices go down is actually good for China, the buyers of the commodities, not so much for the Brazilian and Chilean exporters." -- Matt Ferhen

The fall in commodity prices disproportionately affects LAC, as 86.4 percent of LAC exports to China are primary goods, while 63.4 percent of Chinese exports to LAC are manufactured.

“As prices rose, exports grew and growth improved significantly. Latin America can thank China and the commodity boom for not being so affected by the [global] financial crisis [of 2008-2009]. However, exchange rates appreciated, investment concentrated in commodities, manufacturers couldn’t compete with imports from China and beyond, and commodity-led growth led to numerous social and environmental conflicts,” said Gallagher.

China’s exports to LAC are significantly more diverse, coming mostly from manufactured goods like electronics and vehicles that are less sensitive to pricing variables than commodity goods. Effectively, commodity price declines have created a trade imbalance between LAC and China inChina’s favour.

“China bases its relationship with Latin America on its idea of win-win, complementary South-South relations, and they’ve been able to hang their hat a bit on high-price commodity trade that benefits reciprocally,” said Matt Ferhen, head of China and the Developing World Programme at the Carnegie-Tsinghua Center for Global Policy, at a discussion held here Thursday at the Inter-American Dialogue.

“That the prices go down is actually good for China, the buyers of the commodities, not so much for the Brazilian and Chilean exporters, where we might see some difficulties in the relationship.”

In response to slowed growth, the Chinese public demanded that the government institute financial reforms. Chinese President Xi Jinping has announced a series of reforms that have yet to be enacted.

This new economic model responds to pessimistic concerns that government has invested heavily in transit, property development and infrastructure that might never be used and only increase debt. Yet a switch to emphasising internal consumption comes at the expense of LAC commodity exporters.

“Most LAC governments are not well prepared for a commodity price decline. Chile has a strong copper stabilisation fund and sovereign wealth fund that captured some of the commodity boom and stands ready to help out. Most other countries, such as Peru, were never able to admit that the price would change as they locked in a commodity-led growth path,” Gallagher told IPS.

Yet research by institutions like the World Bank suggests that Latin America is not as susceptible to external shocks in the commodity markets as in the 1980s and 1990s.

First, most LAC have instituted macro-financial immune systems, such as paying down debts, accumulating reserves, and reducing dependence on the dollar. The degree to which each country is insulated against external shocks varies.

For example, although the investment rate in the region is almost 25 percent of gross domestic product, close to the rate in Southeast Asia, Brazil’s rate is lower, at 18 percent, and critics say Venezuela has not invested its oil revenues smartly.

A semiannual report from the World Bank also highlights that LAC has rebalanced “its sources of financing away from portfolio and bank credit flows and towards foreign direct investment and remittances.”

On another positive note, China foreign direct investment in LAC, especially in infrastructure and energy, should positively influence LAC economies. Chinese presence, especially in mergers and acquisitions, has also expanded beyond traditional partners like Argentina and Brazil to include Ecuador, Bolivia, and Peru.

Experts hope that these other markets, particularly energy, can offset the commodity trade decline, which is expected to only decrease in 2014.

Based on data from the World Bank, the IMF, and the Economist Intelligence Unit Global Forecasting Intelligence, the GEGI report predicts a 3.1 percent price decline in the LAC-China export basket, nearly twice as deep as the 2013 price decline, implying a growing LAC-China trade deficit in goods for 2014.

The effect on countries’ growth will be nuanced across the region, based both on external factors, domestic demand factors, and internal economic policies. The World Bank predicts Panama will continue growth near seven percent, followed by Peru at five and a half percent.

They predict Chile and Colombia will hover around three and a half percent, Mexico at three percent, and Brazil close to two percent. Venezuela is expected to contract one percent.

This contraction in commodity-based markets has effects beyond Latin America.

“This is not just a concern within Latin America, but globally – Africa, Southeast Asia, and elsewhere. One of the interesting elements of this, and thinking of those who are interested in and concerned about the impact of labour, environment impact, questions of FDI, this is a shared concern across many nations,” said Fehren.