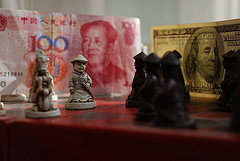 China is expanding loans to Latin America using the yuan instead of the dollar. Credit: Kit Gillet/IPS

The 2008 outbreak of the financial crisis in the United States prompted China to push for the use of its currency in transactions with its leading partners, Brazilian economist Rodrigo Branco explained to IPS.

“This change was mainly due to the need to guarantee steady supplies of commodities, and also because of the instability of the industrialised economies,” which have been hit hardest by the crisis, added Branco, with the Foreign Trade Studies Centre Foundation (FUNCEX).

China, which joined the Inter-American Development Bank (IDB) in 2008, has seen a 16-fold increase in its trade with the countries of Latin America and the Caribbean over the last decade, to a total of 188 billion dollars a year in 2011.

Trade with Brazil alone climbed to 77 billion dollars last year, 37.5 percent up from 2010.

“The Asian giant is financing infrastructure in the region to expand its production and thus guarantee its sources of raw materials, while trying to cut the prices of imports,” the director of Brazil’s Foreign Trade Association (AEB), José Augusto de Castro, told IPS.

This influence is seen, for example, in loans to countries like Venezuela, with which it has a strategic relationship, in the words of Venezuelan President Hugo Chávez.

According to an article in the Wall Street Journal, China’s policy banks are seeking to expand their loans to Latin American countries that are suppliers of key food and mineral commodities using the yuan instead of the dollar, as part of a strategy to promote use of the Chinese currency in international trade.

The Export-Import Bank of China (China Exim Bank) is in negotiations with the IDB to set up a fund that would provide one billion dollars worth of yuan to finance infrastructure projects in Latin America and the Caribbean.

The two institutions signed an agreement in September under which the China Exim Bank committed itself to offer up to 200 million dollars to finance trade between China and Latin America. Part of that funding will be in yuan.

Branco said “the most important aspect of this is the change in stance on the part of the Chinese government, which previously did not want to internationalise the yuan because its possible volatility would leave the country hostage to the external economic situation.”

“The effect on Latin America’s economies of an internationalised yuan is not yet clear. We will have no way to gauge the impact until there is a market in place in which the currency is being freely traded,” the economist added.

Branco pointed out that China has shown interest in this region in three ways: through the direct purchase of minerals and crops from countries with comparative advantages, like Brazil, Argentina and Chile; through mergers or the creation of binational companies; and by means of loans and capital, with credit lines in yuan, to finance imports and infrastructure.

“The increase in trade in yuan has the aim of diversifying risk with respect to the dollar and the euro, given the volatility of the latter two,” Branco said.

“Furthermore, the increased international use of the Chinese currency is designed to complement the implementation of a new currency, which is already being traded in important markets like Hong Kong,” he added.

But de Castro does not believe the new loans in yuan will have an effect on the region’s trade or monetary policies in the short term, because political conditions would have to be different in China in order for the yuan to become an international currency.

“China has a closed system,” he said. “We all know the government adjusts the exchange rate according to its interests. It would have to build up international credibility in order for its currency to become convertible in practice and not just theory.”

Mauricio Claverí, an economist with the Argentine consultancy Abeceb, said that in order to analyse the eventual effects of the introduction of the yuan in regional trade, it is necessary to look at what happened in the Mercosur (Southern Common Market) trade bloc, made up of Argentina, Brazil, Paraguay and Uruguay.

Argentina and Brazil were even considering bringing Uruguay and Chile – an associate member – into the initiative, but they refrained from doing so, and “the system never took off, because companies are very attached to the dollar,” the expert told IPS.

But the possible expansion of the yuan in Latin America raises other doubts. For example, what would the Chinese currency be used for?

Branco said the yuan would initially be used in future trade deals with China itself. “The currency could be used as a guarantee for contracts when the euro or the dollar are more volatile, as in recent times,” he said.

But the accumulation of reserves in yuan, he said, would only occur later, after the consolidation of a global financial market in that currency.

De Castro warned that “because the yuan is not a convertible currency, it would have difficulties being traded in the domestic market.”

In the case of Brazil, the Central Bank would have to absorb the yuan and later try to place them on the international market, which implies a financial risk, he said.

A report published this month by Inter-American Dialogue, a Washington-based centre for policy analysis, exchange, and communication on Western Hemisphere affairs, says China extended 37 billion dollars in credit to Latin America in 2010 – more than the loans from the World Bank, IDB, and United States Export-Import Bank combined.

More than 90 percent of that total went to Venezuela, Brazil, Argentina and Ecuador, especially to finance the purchase of commodities and towards Chinese companies that have investments in those countries.

Countries like Venezuela and Ecuador, which have a harder time obtaining multilateral loans, have particularly benefited from this assistance.

In the context of a 20-year strategic plan, China has loaned Venezuela more than 40 billion dollars since 2007, when a China-Venezuela fund was established, for four billion dollars. The fund, which has been renewed several times, finances investment in infrastructure and social programmes, for which precise figures are unavailable.

And in 2010, a 20 billion dollar credit line was negotiated, half of which is in dollars and half in yuan, mainly to buy goods and services from China.

* With reporting by Marcela Valente in Buenos Aires and Humberto Márquez in Caracas.