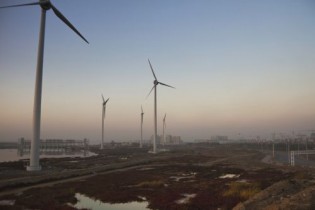 By Carey L. Biron
With U.S. federal funding sources for renewable energy sources already drying up, coupled with a newfound antipathy towards "green" issues issue here in Washington, some are suggesting that China could offer an important opportunity for the future of renewables in the United States and around the world.

By Carey L. Biron
On Friday, a panel discussion in Washington called on the U.S. government to stop treating the question of Tibetan human and civil rights violations as a moral issue.

By Correspondents
Blind Chinese activist Chen Guangcheng has said he wants to leave for the U.S. rather than stay in China, throwing into doubt a deal used to coax him out of the U.S. embassy in Beijing and defuse an impasse that has strained China-U.S. ties.

By Clarissa Sebag-Montefiore
China is notorious for containing some of the world’s deadliest mines - a reputation that has been corroborated in recent months by a series of fatal accidents. China is the world’s largest consumer and producer of coal. But the mining industry is beset by illegal operations, dangerous working conditions, local corruption and cover-ups of fatalities.

Protests Over Property Rise Across China

By Emily-Anne Owen
Zhang Haxia and her husband received a knock on the door in the middle of one night last December. They were dragged from their home in south-west China and forced into a van. When they returned nothing was left.

By Dean Baker
Politicians in the United States must ritualistically assert that the U.S. is and always will be the world's leading economic, military and political power. This chant may help win elections in a country where respectable people deny global warming and evolution, but it has nothing to do with the real world.

You Name It, We Lost It

By Clarissa Sebag-Montefiore
Millions of Chinese micro-blog users will be forced to hand over their details this week in a real-name registration drive. The new state regulations - piloted in five Chinese cities - have created uproar amidst fears the move will bring heightened censorship and a crackdown on users.

By John Feffer
When Hu Jintao took over as the leader of China in 2002, U.S. companies welcomed his accession as a "good sign for American business"." Political analysts described Hu as a member of the fourth generation of Communist party leadership who might very well turn out to be a "closet liberal".

By Poppy Moore
No road leads to Motuo County. There is no post office or newspaper. But, for the 10,000 residents of one of the planet’s remotest corners, a local radio station serves as the vital link to the outside world.

By Emily-Anne Owen
An escalating number of unprecedented self-immolations and violent protests that have gripped Tibetan regions of Western China over recent weeks show no sign of abating, as the country reels from the worst Tibet crisis since the 2008 riots.

By Clarissa Sebag-Montefiore
A recent series of public spats between Hong Kong locals and mainland Chinese have highlighted escalating tensions between Beijing and the former colony - and heralded in one of the most conspicuous anti-mainland campaigns seen in Hong Kong since the handover.

By Marwaan Macan-Markar
The government of Philippines President Benigno Aquino may be wading into choppy diplomatic waters by turning to the United States to counter China’s aggressiveness in the South China Sea, one of the world’s busiest shipping lanes.

By Cam McGrath
The illegal trade in ivory continues in Egypt, with ivory products sold openly in local tourist markets by traders who operate with impunity, a new study by the conservation group Traffic has found.

By Antoaneta Becker
China’s response to calls from the West to join an oil embargo penalising Iran for its nuclear programme so far has been to choose the middle course typical of its non-interfering foreign policy of the last 30 years – denouncing sanctions on one hand yet working to protect its national interests on many fronts.

By Marwaan Macan-Markar
Six countries that share the Mekong River are being drawn into a development turf war, exposing initiatives by the United States government and its Asian allies – Japan and South Korea – to contain China’s growing influence in the region.

CHINA: In Chains, And Writing Out

By Emily-Anne Owen
Liu Xiaobo, the imprisoned Nobel Peace Prize Laureate, has been placed at the forefront of the fight for human rights in China once again with a new collection of works published in translation this January.

CHINA: Dragon Drags the World In

By Antoaneta Becker
Chinese fengshui masters have been busy advising edgy followers how to optimise their luck in the auspicious but volatile Year of the Dragon, which according to the lunar calendar begins on Jan.23. In the West though, Chinese superstitions about the precarious nature of Dragon years don’t hold court, and 2012 will arguably mark the largest by far Chinese New Year celebrations in many world capitals and major cities.
Next Page »
ADVERTISEMENT ADVERTISEMENT