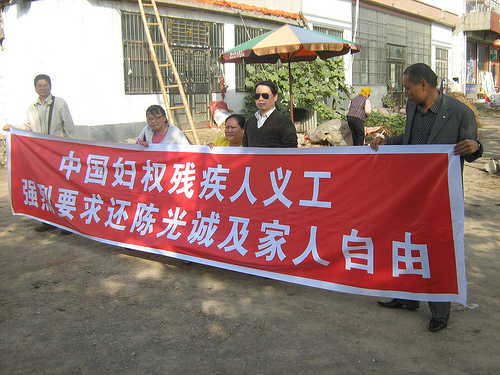 Disabled activists hold banner reading Return Freedom to Chen Guangcheng and His Family, on a thwarted visit to his village in October 2011. Credit: Ted Lipien/CC BY 2.0

DOHA, May 3 2012 (IPS) - Blind Chinese activist Chen Guangcheng has said he wants to leave for the U.S. rather than stay in China, throwing into doubt a deal used to coax him out of the U.S. embassy in Beijing and defuse an impasse that has strained China-U.S. ties.

That stalemate appears all the more troublesome for the U.S., with Chen saying on Thursday that he feared for his and his family’s safety if he stayed in China under an agreement that U.S. officials initially said he was happy with.

Chen, a self-taught legal activist, is under Chinese control in a Beijing hospital, having left the embassy on Wednesday.

He had taken refuge at the mission for six days after escaping house arrest, and left under a diplomatic solution in which the U.S. said China promised that Chen could join his family and be allowed to start a new life in a university town, safe from the rural authorities who had abused him in prison and under house arrest for nearly seven years.

But Chen told the Reuters news agency on Thursday by telephone from hospital, where he was escorted by U.S. officials after leaving the embassy, that he had changed his mind after speaking to his wife who spoke of recent threats made against his family.

“I feel very unsafe. My rights and safety cannot be assured here,” he said, adding that his family supported his decision to try to get to the U.S.

The activist, citing descriptions from his wife, Yuan Weijing, said his family had been surrounded by Chinese officials who menaced them and filled the family home.

Chen, from a village in rural Shandong province, has two children.

“When I was inside the American embassy, I didn’t have my family, and so I didn’t understand some things. After I was able to meet them, my ideas changed.”

Al Jazeera’s Rob McBride, reporting from Hong Kong, said that Chen’s new situation does not necessarily offer him much safety.

“At the moment he does seem to be in a fairly precarious position. Almost, you’d have to say, back in the position he was in before he sought sanctuary in the U.S. embassy,” he said.

Chen’s decision puts more strain on U.S.-China relations, at a tense time for both countries.

U.S. Secretary of State Hillary Clinton found herself in the eye of the diplomatic storm on Thursday, turning up for the opening of annual bilateral talks in Beijing which have been overshadowed but not derailed by the Chen case.

She used the occasion to urge China to protect human rights, but made no specific mention of Chen, whom she had spoken to on Wednesday after he left the embassy.

“We believe that all governments do have to answer to citizens’ aspirations for dignity and the rule of law, and that no nation can or should deny those rights,” Clinton said as she opened on Thursday the annual strategic and economic Dialogue.

Chinese President Hu Jintao said in his speech that China and the U.S. must respect each other even if they disagree.

Hu said that “given our different national conditions it is impossible for both China and the United States to see eye to eye on every issue”.

China has demanded that the U.S. apologise for sheltering Chen in its embassy, the official Xinhua news agency said.

Foreign Ministry spokesman Liu Weimin said: “China is very unhappy over this. The U.S. action is an interference in China’s internal affairs and China cannot accept it.”

“Chen Guangcheng, a native from Yinan County of eastern China’s Shandong province, entered the U.S. embassy in Beijing in late April and left of his own volition after a six-day stay,” he said.

Chen, who has been blind since childhood, has long been a high-profile figure, and international rights groups have frequently expressed alarm at the treatment of him and his family.

Chen exposed how local authorities in Linyi, in Shandong province, forced thousands of women to have abortions or be sterilised as part of China’s one-child policy

He was placed under house arrest in 2010 after spending more than four years in jail for disrupting traffic and damaging property.

Chen’s colleagues said the escape from house arrest had taken months to plan, and was carried out with the help of a network of friends and activists.

He had jumped over the wall that the authorities had built around his house, and was taken to Beijing, where supporters say he stayed in safe houses before fleeing to the embassy. * Published under an agreement with Al Jazeera.