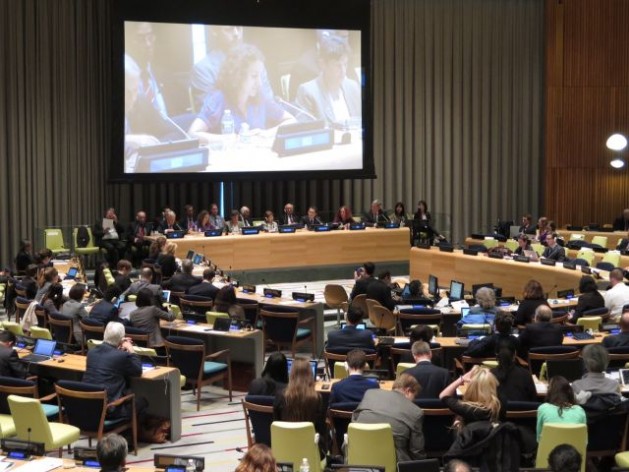 UNITED NATIONS, May 7 2015 (IPS) - As the month-long review conference on the Nuclear Non-Proliferation Treaty (NPT) continued into its second week, a coalition of some 50 faith-based organisations (FBOs), anti-nuclear peace activists and civil society organisations (CSOs) was assigned an unenviable task: a brief three-minute presentation warning the world of the disastrous humanitarian consequences of a nuclear attack.

Accomplishing this feat within a rigid time frame, Dr. Emily Welty of the World Council of Churches (WCC) did not mince her words.

Since August 1945, Dr. Welty told delegates, the continued existence of nuclear weapons has forced humankind to live in the shadow of apocalyptic destruction.

Speaking on behalf of the coalition, she told delegates: “We raise our voices in the name of sanity and the shared values of humanity. We reject the immorality of holding whole populations hostage, threatened with a cruel and miserable death.”

And she urged the world’s political leaders to muster the courage needed to break the deepening spirals of mistrust that undermine the viability of human societies and threaten humanity’s shared future.

She said nuclear weapons are incompatible with the values upheld by respective religious traditions – the right of people to live in security and dignity; the commands of conscience and justice; the duty to protect the vulnerable and to exercise the stewardship that will safeguard the planet for future generations.

“Nuclear weapons manifest a total disregard for all these values and commitments,” she declared, warning there is no countervailing imperative – whether of national security, stability in international power relations, or the difficulty of overcoming political inertia – that justifies their continued existence, much less their use.

SGI, one of the relentless advocates of nuclear disarmament, was involved in three international conferences on the Humanitarian Impact of Nuclear Weapons (in Oslo, Norway in March 2013; Nayarit, Mexico in February 2014; and Vienna, Austria, December 2014), and also participated in two inter-faith dialogues on nuclear disarmament (in Washington DC, and Vienna over the last two years).

At both meetings, inter-faith leaders jointly called for the abolition of all nuclear weapons.

The current NPT review conference, which began Apr. 27, is scheduled to conclude May 22, perhaps with an “outcome document” – if it is adopted by consensus.

The review conference also marks the 70th anniversary of the U.S. nuclear attack on the Japanese cities of Hiroshima and Nagasaki at the end of World War II.

Since August 1945, when both cities were subjected to atomic attacks, Dr Welty told delegates, the continued existence of nuclear weapons has forced humankind to live in the shadow of apocalyptic destruction.

“Their use would not only destroy the past fruits of human civilization, it would disfigure the present and consign future generations to a grim fate.”

For decades, the coalition of FBOs said, the obligation and responsibility of all states to eliminate these weapons of mass destruction has been embodied in Article VI of the Treaty on the Non-Proliferation of Nuclear Weapons (NPT).

But progress toward the fulfillment of this repeatedly affirmed commitment has been too slow – and today almost imperceptible.

Instead, ongoing modernisation programmes of the world’s nuclear arsenals is diverting vast resources from limited government budgets when public finances are hard-pressed to meet the needs of human security.

“This situation is unacceptable and cannot be permitted to continue,” the coalition said.

The London Economist pointed out recently that every nuclear power is spending “lavishly to upgrade its atomic arsenal.”

China is investing in submarines and mobile missile batteries while the United States is seeking Congressional approval for 350 billion dollars for the modernisation of its nuclear arsenal.

The coalition pledged to: communicate within respective faith communities the inhumane and immoral nature of nuclear weapons and the unacceptable risks they pose, working within and among respective faith traditions to raise awareness of the moral imperative to abolish nuclear weapons; and continue to support international efforts to ban nuclear weapons on humanitarian grounds and call for the early commencement of negotiations by states on a new legal instrument to prohibit nuclear weapons in a forum open to all states and blockable by none.