In a May 19 editorial entitled “The United States Uses Pawns”, Mavsar Varayev, deputy editor of the state-sponsored Chechen media outlet Grozny Inform, warned Milashina that she is likely to become “the next victim” in a series of murders, supposedly orchestrated by U.S. and Israeli intelligence in a bid to “destabilise” Russia. 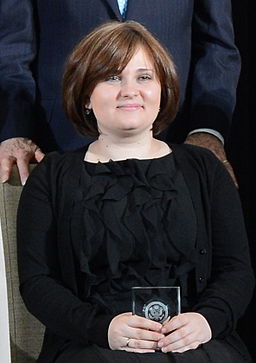 Elena Milashina with her International Women of Courage Award at the 2013 awards ceremony in Washington. Credit: State Department photo/Public Domain

He explicitly said she could meet the same fate as Anna Politkovskaya, the Novaya Gazeta journalist murdered in 2006, and Boris Nemtsov, the Russian political opposition leader murdered in March 2015.

As reported by Radio Free Europe/Radio Liberty, Milashina considers the article an “order for [her] murder”.

Nina Ognianova, Europe and Central Asia Program Coordinator for the New York-based Committee to Protect Journalists, told IPS: “We condemn the threats against our colleague Elena Milashina and call for a thorough investigation.”

“The threats on Grozny Inform follow a campaign of intimidation and harassment against Elena that has been carried out in the pro-government media, including on national television. This is a disturbing trend that can translate into real risk on the ground.

“Given that Elena covers such sensitive subjects as corruption and human rights abuses in the volatile North Caucasus region, Russian authorities must carry out an effective probe into the threats and ensure Elena’s safety as an urgent priority.”

The independent newspaper Novaya Gazeta also perceives the Chechen editorial as a “direct death threat” against an employee and has called upon Russian authorities to investigate the issue.

The threats on Grozny Inform follow a campaign of intimidation and harassment against Elena that has been carried out in the pro-government media, including on national television." -- Nina Ognianova of CPJ

Human rights and press freedom organisations have strongly condemned the death threats against Milashina and join Novaya Gazeta in calling for an independent investigation.

According to Amnesty International, “[T]he tone and the content of the article, and the context in which it is being published, in a government-owned media outlet, gives strong reason to fear that the death threats against Elena Milashina are serious.”

The editorial was published shortly after Milashina reported on the planned forced marriage of 17-year-old Louise Goylabieva to Chechen police officer Nazhud Guchigov, who is decades older (originally reported to be 57, but stating himself to be 46) and already married.

Guchigov has close links to Ramzad Kadyrov, the Kremlin-backed head of the Chechen Republic, who faces serious allegations of human rights abuses.

After the story attracted worldwide attention, Milashina was warned by police officers at a checkpoint in Chechnya she had better be mindful of her own safety. Activists familiar with the case say the recent threats do not stand alone.

As reported by Human Rights Watch, Milashina has already on several occasions been the target of harassment and threats, apparently in relation to her reporting on enforced disappearances, extrajudicial executions, racism, torture and the killings of journalists such as her murdered colleagues Anna Politkovskaya and Natalia Estemirova.

In 2012, Milashina and her friend, Freedom House employee Ella Asoyan, were violently assaulted by two unknown men in the Moscow suburb of Balashikha. After kicking and punching the women, the men stole Milashina’s wallet and Asoyan’s laptop.

According to Human Rights Watch, the ensuing investigation by police was “half-hearted”.

In the Grozny Inform editorial, Varayev classifies the beating as “one of the necessary episodes” in preparing for Milashina’s murder.

Despite the dangers, the journalist says she does not intend to flee her country. In a recent interview with Ekho Moskvy, Milashina reiterated her will to stay in Russia and fulfil her mandate as a journalist.

In 2013, U.S. Secretary of State John Kerry and First Lady Michelle Obama paid tribute to Milashina’s commitment to freedom and human rights by granting her the Secretary of State’s International Women of Courage Award, a distinction that honours women leaders worldwide who have demonstrated exceptional engagement for human rights, gender equality and social progress.

As translated by The Interpreter, the Grozny Inform editorial refers to the award in its final sentences, stating “the latest hero who will pay for their life for ‘the defense of human rights’ in Russia will be our Novaya Gazeta special correspondent. It was not at all an accident that Secretary of State John Kerry gave Milashina the International Women of Courage award for her journalistic investigation. Let’s hope that it is not posthumous…”

The episode might be viewed as part of a broader media confrontation between Russia and “the West”, which is currently playing out most visibly in the context of the Ukraine crisis, where information warfare and propaganda have assumed increasingly important roles.