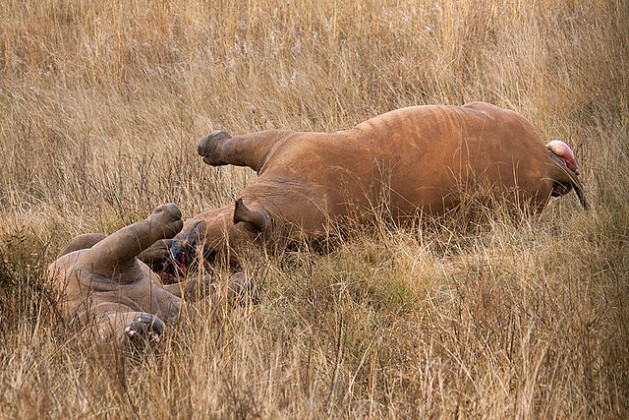 Mother and young rhinoceros killed for their horns. The poaching of elephants and rhinos is becoming “increasingly militarized." Credit: Hein waschefort/cc by 3.0

But the latest Small Arms Survey 2015, released Monday, says some of these weapons are also being used to destroy wild life and help misappropriate the earth’s mineral riches.

The poaching of elephants and rhinos is becoming “increasingly militarized,” says the report, while the negative impact of climate change is triggering human interactions, including on underlying causes for armed conflicts, as well as on actual fighting.

Besides the killing of thousands of humans in current military conflicts, perhaps the next most devastating impact of small arms and light weapons is on the destruction of wildlife.

In Africa, elephant populations are in decline, and the illicit killing of rhinos has escalated sharply over recent years, according to the survey.

The illegal rhino horn trade reportedly threatens all African species of rhino. But despite some successful efforts to re-introduce rhinos to protected areas in South Africa, which is home to 80 percent of all African rhinos, the rate of poaching continues to accelerate, according to the World Wildlife Fund International (WWF).

Paula Kahumbu, a leading conservationist and executive director of WildlifeDirect, says today’s wildlife crime threatens the survival of endangered and vulnerable species in many African countries.

She said evidence documented by her Kenya-based non-governmental organisation (NGO) shows that legal penalties designed to deter such crimes have had little impact on poachers and traffickers.

The survey also points out the role of climate change in present and possibly future conflicts.

In tropical war zones, fighting traditionally stops during the rainy season, only to resume when the soil hardens enough for vehicles to navigate unpaved roads.

And even battle tactics are determined and influenced by the state of terrain.

“In some parts of the world, rainy seasons are now shifting in time and intensity. As global warming alters temperature, rainfall and sea levels, as many expect it will, it is almost certain to affect armed violence and armed conflict in ways that for now are predictable,” according to the survey.

The proliferation of small arms is also responsible for the illegal extraction of natural resources, transforming remote outposts into urban hubs virtually overnight.

As a result, it spurs insecurity and violence as different groups compete over spoils and local communities protest perceived wrongs.

The extraction of oil, gas and precious minerals is accompanied by significant urbanisation of adjoining areas and the effort to control and secure resources can attract a variety of armed actors, including security forces and predatory groups.

The survey, produced annually with the support of the Swiss Federal Department of Foreign Affairs and several other Western nations, also focuses on the small arms trade, floating armouries, the increasing number of private security firms, the Arms Trade Treaty and the U.N.’s Programme of Action to track the flow of illegal weapons.

With weapons continuing to all into the hands of armed groups, the survey says these groups “are better armed (today) than they were a decade ago”.

The arms in their possession include large calibre weapons. And “of particular concern is jihadist possession of man-portable air defence systems (MANPADS), although many of these may be inoperable.”

The weapons used by most insurgent groups consists largely of Cold War-era Soviet and Chinese arms and ammunition, ”but they also use more recently-produced materiel from Bulgaria and China, among other states.”

Focusing specifically on the politically volatile Middle East, the survey says parts of the Middle East and North Africa suffer from high levels of armed violence, armed conflict and political instability, as well as the risk of small arms misuse and diversion.

According to the survey, there is little evidence the “Arab Spring” has had a significant impact on the policies of major exporters of small arms to the region.

Libya is the only state affected by the uprisings to be subject to a U.N. arms embargo.

And efforts to impose such an embargo on Syria have failed, and the option has not been discussed with regard to Egypt.