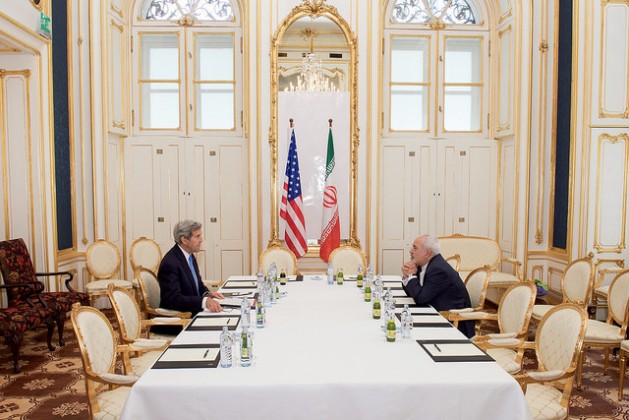 WASHINGTON, Jul 14 2015 (IPS) - A historic deal on Iran’s controversial nuclear programme was announced today during the early morning hours in Vienna over a decade after talks between Tehran and world powers began.

“This deal demonstrates that American diplomacy can bring about real and meaningful change,” said U.S. President Barack Obama from the East Room of the White House.

“Put simply, no deal means a greater chance of more war in the Middle East,” he said.

“This is the beginning of what could be a process of the U.S. and Iran developing a better and more normal relationship. I don’t expect that to be instant…but you have to begin some place, and it’s a good beginning.” -- Gary Sick

“This is a historic day also because we are creating the conditions for building trust and opening a new chapter in our relationship,” Iran’s top negotiator, Foreign Minister Javad Zarif, said in Vienna.

The “Joint Comprehensive Plan of Action” (JCPOA), drafted during 18 consecutive days of intensive negotiations in the Austrian capital by Iran and the P5+1 (US, UK, France, China, Russia and Germany), freezes Iran’s nuclear programme for the next decade in exchange for gradual sanctions relief.

The agreement “establishes a strong and effective formula for blocking all of the pathways by which Iran could acquire material for nuclear weapons,” said Daryl Kimball, executive director of the Washington-based Arms Control Association.

“When implemented, the P5+1 and Iran agreement will establish long-term, verifiable restrictions on Iran’s sensitive nuclear fuel cycle activities—many of these restrictions will last for 10 years, some for 15 years, and some for 25 years,” he added.

The process that led to the deal signed today by Iran and world powers took 12 years.

Three Western European countries, known then as the EU-3 (France, Germany, U.K.), began the negotiations with Iran in 2003 before the U.S., along with China and Russia, finally joined the talks in 2006 and formed the E3+3 (or P5+1).

It would take five more years of on-and-off talks, threats of war, a crippling sanctions regime, sabotage, assassinations, cyber warfare, and a change of presidents in Tehran and Washington before an interim agreement was finally reached in 2013.

The deal was made between Iran and six world powers, but direct U.S.-Iranian engagement proved to be the key ingredient of success.

Tehran and Washington have been enemies since 1979 when Iranians brought down their U.S.-backed monarch in a domestically supported revolution premised on the notion of independence from Western exploitation.

The 1979 Iranian student takeover of the U.S. Embassy in Tehran, which led to 52 American diplomats and citizens being held hostage for 444 days, and Washington’s support of Iraqi President Saddam Hussein while he launched an 8-year war with Iran in 1980, are still cited as major grievances by both sides.

But the August 2013 presidential election of Hassan Rouhani—a centrist, moderate cleric known as the “diplomatic sheik” in Tehran—resulted in a new era of U.S.-Iran relations.

With the tacit support of Supreme Leader Ali Khamenei, Rouhani cautiously accepted Obama’s outreach to Tehran from his first month in office, beginning with the phone call—the first U.S.-Iran direct presidential contact in more than 35 years—that occurred between the two leaders during the Iranian president’s first visit to the United Nations General Assembly (UNGA) in September 2013.

The presidents have yet to meet face-to-face, but direct, high-level U.S.-Iranian meetings during the talks—once taboo—became unremarkable in the last 18 months of the negotiations after U.S. Secretary of State John Kerry met directly with Iranian Foreign Minister Zarif at the UNGA during Rouhani’s visit.

This is not the first time Tehran and Washington have cooperated since the Iranian revolution. Iran’s assistance—led by Zarif when he was ambassador to the U.N.—proved crucial to the U.S. mission to establish a post-Taliban government in Afghanistan in 2001.

But it is the first time since the 1979 Iranian revolution that Tehran and Washington have negotiated during an extended period of time, openly and respectfully at the highest level to bring about an internationally sanctioned accord.

“That’s what they mean by confidence-building measures,” said Gary Sick, a former national security official and Columbia University scholar who has been studying U.S.-Iran relations for decades.

“This is the beginning of what could be a process of the U.S. and Iran developing a better and more normal relationship,” he added. “I don’t expect that to be instant…but you have to begin some place, and it’s a good beginning.”

Israeli Prime Minister Benjamin Netanyahu, who has been warning about an impending Iranian nuclear weapon since 1995, called the deal “a bad mistake of historic proportion” today.

“Our concern, of course, is that the militant Islamic state of Iran is going to receive a sure path to nuclear weapons,” he said, adding that Iran, which he has repeatedly likened to the Islamic State—a terrorist group operating in Iraq and Syria—would get a “jackpot of cash bonanza of hundreds of billions of dollars.”

The Iranian parliament, which has expressed consistent criticism of the negotiations, will also review the deal though no timeframe has been set.

But the accord will likely face its harshest criticism in the U.S. Congress where lawmakers have 60 days to review it after the official date of submission.

Influential Republicans have already threatened to block it.

“This ‘deal’ will only embolden Iran – the world’s largest sponsor of terror – by helping stabilize and legitimize its regime as it spreads even more violence and instability in the region,” said House Speaker John Boehner in a statement.

“We will fight a bad deal that is wrong for our national security and wrong for our country,” he added.
President Obama vowed, however, to veto any bill that delays its implementation.

“This is not the time for politics or posturing,” he said Tuesday. “The world would not support an effort to permanently sanction Iran into submission.”

Even before the final deal was announced, officials on both sides were already hinting that a successful conclusion to the talks could lay the groundwork for further U.S.-Iranian cooperation.

“It’s clear to me that if an agreement is successfully reached, satisfactory to everybody, a conversation might be able to begin,” Secretary of State John Kerry told the Boston Globe three days before the deal was announced.

“[The] #IranDeal is not a ceiling but a solid foundation,” wrote Foreign Minister Zarif on Twitter the day the accord was announced. “We must now begin to build on it.”

But while official statements from both countries have become increasingly suggestive in the last two years, hopes for a Nixon-to-China historical replay between the long-time adversaries are likely premature.

“Thirty-five years of mistrust and hostilities cannot be resolved through only the nuclear issue,” Hossein Mousavian, who served as the spokesman for Iran’s nuclear negotiating team when Rouhani was its chief, told IPS.

“A deal is a success and big step toward lessening tension…but the wall of mistrust is so thick that breaking it down would take some years,” he said.