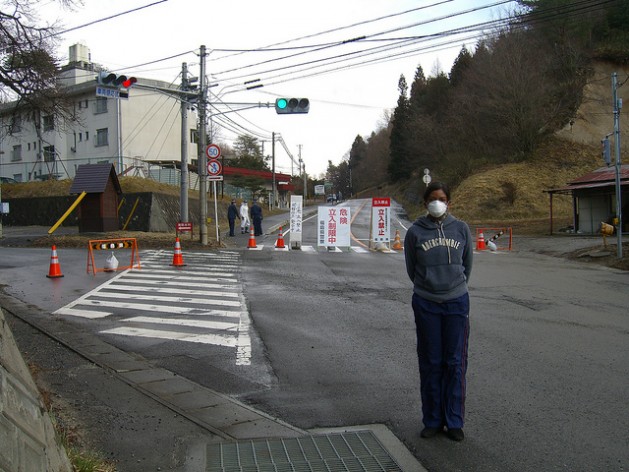 A reporter stands at a roadblock outside Fukushima's 20 kilometre exclusive zone in March 2011. Credit: Suvendrini Kakuchi/IPS

NEW YORK, Aug 10 2015 (IPS) - Protesters rallied outside Japan’s Sendai nuclear plant a day ahead of its planned opening and four years after the Fukushima disaster galvanised opposition to nuclear power in the country.

In a statement, Kyushu Electric Power Co. said it will begin bringing online the No. 1 reactor at its Sendai facility on Aug. 11, start power generation as early as Aug. 14 and return it to normal operations next month.

“We will continue to seriously and carefully cooperate with the country’s inspections, making safety our top priority, cautiously advancing the restart process,” the company said in the statement.

However, local activists say that there is no adequate plan in place to quickly evacuate tens of thousands of residents in the event of a Fukushima-style meltdown.

Triggered by a massive March 2011 earthquake, Fukushima was the largest nuclear disaster since the Chernobyl disaster of 1986 and the second disaster (along with Chernobyl) to measure Level 7 on the International Nuclear Event Scale.

It led to a complete shutdown of Japan’s nuclear power plants in 2013, which will end Tuesday, if the Sendai facility opens as planned.

Although the new plant meets overhauled safety regulations, opponents point out that Japan records more earthquakes than any other country — and the reactor that opens tomorrow is 60 kilometres from an active volcano in the country’s northwest.

“There are schools and hospitals near the plant, but no one has told us how children and the elderly would be evacuated,” Yoshitaka Mukohara, a representative of a group opposing the Sendai restart, told the Guardian.

“Naturally there will be gridlock caused by the sheer number of vehicles, landslides, and damaged roads and bridges.”

The Shinzo Abe government’s energy plan relies heavily on nuclear power, setting a goal to have it meet more than 20 per cent of the country’s energy needs by 2030.

“We believe it is important for our energy policy to push forward restarts of reactors that are deemed safe,” Chief Cabinet Secretary Yoshihide Suga told reporters.

But Jan Vande Putte, a specialist in radiation safety and an energy campaigner with Greenpeace Belgium, notes that, “Japan has been nuclear-free for over a year, and no electricity blackouts have occurred. The Japanese government should turn its back on nuclear power and instead opt for an energy policy based on improving energy efficiency and expanding renewable energy.

“This would protect its citizens from a repetition of the horrors of Fukushima and set the country on track to meet its climate commitments by 2020.”