A Younger Generation Cannot March on an Empty Stomach 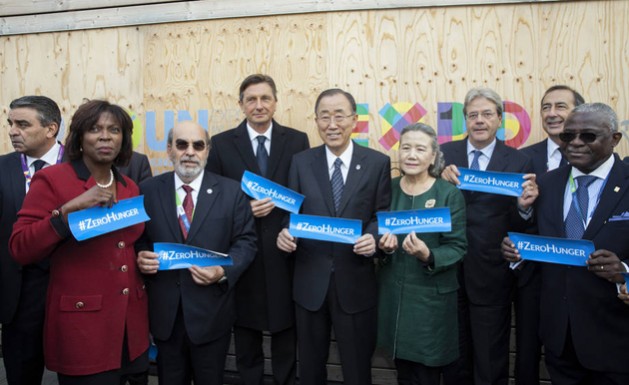 But that generation of young people, he realizes, cannot be expected to march on an empty stomach.

“As we strive to become the Zero Hunger Generation”, he said, in a message to the Committee on World Security on Oct. 12, “we must ensure young people are empowered to be active participants in our shared efforts.”

Last month, over 160 world leaders adopted the 2030 Agenda for Sustainable Development, whose 17 goals include promoting prosperity and protecting the environment.

One of the primary aims of the Sustainable Development Goals (SDGs) is to eliminate both hunger and poverty by 2030.

But Ban is unequivocal on the importance of world food security for the success of the U.N.’s highly-touted development agenda.

“We will not be able to deliver on the promise of the 2030 Agenda without rapid progress towards ending hunger and undernutrition,” he warned.

Danielle Nierenberg, President, Food Tank, a U.S.-based non-governmental organisation (NGO), told IPS that without a strong commitment to improving food and nutrition security – and the empowerment of smallholder farmers – it will be impossible to achieve any of the SDGs.

In many ways, she pointed out, the SDGs are a continuation of the U.N.’s Zero Hunger Challenge, which was led by the U.N. Secretary General.

But policy makers need to make real commitments and investment in eradicating hunger and poverty. Without those commitments the world will not be able to eradicate hunger by 2030, she noted.

“I am hopeful that the business community, funders and donors, and policy makers understand that we can no longer wait to address these challenges and find ways to make agriculture environmentally and economically sustainable and nourish both people and the planet,” she declared.

Food Tank categorically says “our food system is broken”. “Some people don’t have enough food, while others are eating too much. There’s only one way to fix this problem – and it starts with you and me.”

In its annual State of Food and Agriculture (SOFA) released Oct. 13, the Food and Agriculture Organisation (FAO) says social protection programmes, including school feeding, public works, cash transfers and pensions, play a large role in combating hunger and poverty around the world.

And yet, the report laments, only one in three of the world’s poorest are covered by any form of social protection.

The report asks whether poor countries can afford social protection programmes and how they can be designed to promote inclusive economic growth, improve livelihoods and contribute to the eradication of hunger.

The Millennium Development Goals (MDGs) on reducing poverty have been met by many countries, yet many others lag behind and the post-2015 challenge will be aimed at the complete eradication of poverty and hunger.

“Many developing countries increasingly recognize that social protection measures are needed to relieve the immediate deprivation of people living in poverty and to prevent others from falling into poverty when a crisis strikes,” SOFA added.

Speaking on World Food Day in Rome on Oct. 16, the Secretary-General said seven decades ago, countries established the Food and Agriculture Organisation with a ringing promise of “ensuring humanity’s freedom from hunger”.

“Today we continue to aim for the Zero Hunger Challenge I launched three years ago to keep this promise to our world.”

“The 2030 Agenda is our road map to success,” he said, pointing out that hunger is more than a lack of food – “it is a terrible injustice.”

“We are here today to pledge to achieve food security for all – to build a global movement to end hunger. This will go hand-in-hand with greater health, economic development and social inclusion for individuals and societies,” he declared.