U.N. Launches Probe Amidst Charges of Bribery and Corruption

UNITED NATIONS, Oct 8 2015 (IPS) - After initial hesitation, the United Nations has decided to probe allegations of bribery and corruption extending to the office of a past President of the UN General Assembly (UNGA), the highest policy-making body in the 70-year old Organisation. 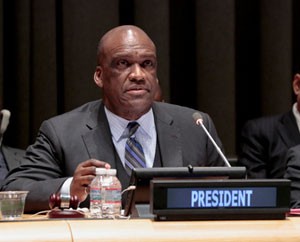 John Ashe, President of the sixty-eighth session of the Assembly, addresses the opening of an event on Apr. 22, 2014
Credit: UN Photo/Evan Schneider

Ambassador John Ashe of Antigua and Barbuda, who has been accused of receiving over 1.3 million dollars in “bribes” from a Chinese company, was the President of UNGA during 2013-2014.

The investigations will also focus on a donation of about 1.5 million dollars to the U.N. Office for South-South Cooperation (OSSC) from the Sun Kian Ip Group of China and one of its affiliates, Global Sustainability Foundation.

The head of the Group, a Chinese businessman Ng Lap Seng, and several of his colleagues are under arrest on charges of bribery and tax evasion.

The U.S. federal authorities have charged Ashe with tax fraud – primarily for not declaring his income in his annual tax returns – which carry penalties that include heavy fines and/or jail sentences.

“In light of the recent accusations announced by U.S. federal authorities, the Secretary-General is requesting that the Office of Internal Oversight Services (OIOS) launch an audit of the interaction between the United Nations and the Global Sustainability Foundation and the Sun Kian Ip Group, and the use of any funds received from these entities,” U.N. spokesperson Stephane Dujarric told reporters Oct. 8.

The Secretary-General (Ban Ki-moon) is concerned about the serious nature of the allegations, which go to the heart of the work of the United Nations and its Member States, he said.

Ban also reaffirmed there will be no tolerance for any corruption at the United Nations or in the name of the world body.

He is committed to ensuring that funds received from such private entities were handled properly according to relevant U.N. rules and regulations, Dujarric said.

Earlier, the U.N. took the position that it did not have the power or mandate “to investigate individuals or entities that weren’t considered staff or part of the official U.N. umbrella.”

The president of the General Assembly is elected annually by member states and is not considered a U.N. official, nor is he on the U.N. payroll.

The Chinese funds were also earmarked for a proposed U.N. conference center in the former Portuguese colony of Macau, currently under the administrative jurisdiction of China.

Ng, described as a real estate mogul, was based in Macau and hosted a conference there in August, in which several U.N. officials and diplomats participated.

Ashe was reportedly paid to also promote Ng’s business interests in the Caribbean, specifically in Antigua and Barbuda.

The 1.5 million dollars donated to the Office of South-South Cooperation were reportedly used to fund several U.N. conferences and panel discussions, plus for an upcoming conference of the 134-member Group of 77 developing countries.

Asked if the money will be returned if corruption and bribery charges are proved, Dujarric said it is up to the OSSC to make that decision.

Responding to a question, he also said the United Nations does not provide funds involving travels by Assembly Presidents – all of whom have been known to be globe-trotters and their visits hosted by foreign governments.

Protocol-wise, the President of the General Assembly, not the U.N. Secretary-General, ranks as head of state at all international conferences.

U.S. Attorney Preet Bharara, who is leading the investigations, has also charged five others, including Ambassador Francis Lorenzo of the Dominican Republic.

Striking a note of sarcasm, Bharara told reporters: “We will be asking: Is bribery business-as-usual at the U.N.?”

But Dujarric was quick to refute those charges when he told reporters: “First of all, corruption is not business as usual at the U.N.”

“Second of all, we have…we had not been informed of the investigation by the U.S. Attorney’s Office. Our Office for Legal Affairs and other senior officials were not aware of the case until it was read about in the press. Obviously, if we’re contacted by the relevant U.S. authorities, we will cooperate with them,” he added.

Asked to confirm or deny the existence of a U.N. document relating to a proposed conference centre in Macau, Dujarric initially said the U.N. had not been able to find that document.

But said subsequently the document had been found, which is a standard letter from a Permanent Representative to the Secretary-General asking him to circulate it as an official document of the General Assembly: document A/66/748.]

The current President of the General Assembly Mogens Lykketoft of Denmark told reporters corruption has no place at the United Nations or anywhere else.

“I am deeply shocked regarding the news today concerning the President of 68th session of the UN General Assembly. It means, like the Secretary-General said this morning, that this is a very hard attack on the integrity of the United Nations.”

Lykketoft said neither he, nor his Office has been contacted by U.S. authorities. “Of course, we stand ready to engage with all concerned as necessary,” he added.

“I think the United Nations and its representatives should be held to the highest standards of transparency and ethics,” he added.