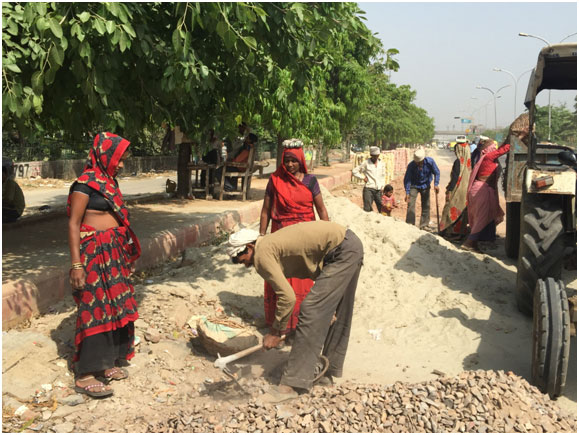 Rural Indian women are under enormous pressure from family to not go in for any oral contraceptive method or injections but opt for surgery instead. Credit: Neeta Lal/IPS

NEW DELHI, Feb 9 2016 (IPS) - The tragic death of 12 women after a state-run mass sterilisation campaign in the central Indian state of Chhattisgarh went horribly wrong in 2014 made global headlines. The episode saw about 80 women “herded like cattle” into makeshift camps without being properly examined before the laparoscopic tubectomies that snuffed out their lives. In another incident in 2013, police in the eastern Indian state of Bihar arrested three men after they performed a botched sterilisation surgery without anaesthesia on 53 women over two hours in a field.

Deaths due to sterilisation are hardly new in India. According to records, over four million such operations were performed in 2013-14 resulting in a total of 1,434 deaths between 2003 and 2012. Between 2009 and 2012 the government paid compensation for 568 deaths resulting from sterilisation according to health ministry data.

Health activists point out that the primary reason for this mess is an overt focus on female
sterilisation in the government’s family planning programme and a woeful lack of birth-control choices for women. Other forms of contraception are not available on an adequate basis because of the lack of health-care facilities. Injectable and Progestin-only pills are on offer only in private hospitals which severely inhibits their usage by poor women.

Worse, male sterilisation is still frowned upon socially. This places the onus of birth control on women with limited participation from men. According to latest research by the global partnership, Family Planning 2020 (FP2020), female sterilisation accounts for 74.4 per cent of the modern contraceptive methods used in India.

As against this, male sterilisation is merely 2.3 per cent, while use of condoms is 11.4 per cent. The use of pills constitutes just 7.5 per cent of modern methods, whereas injectables and implants are almost absent. In the southern state of Karnataka, for instance, women account for 95 per cent of sterilisations conducted at family welfare centres.

Family planning experts attribute this sharp gender disparity to an entrenched patriarchal mindset and ingrained societal attitudes. This is the main reason, say activists, why despite vasectomy being a far less invasive and less complicated procedure as compared to tubectomy, more women are forced to undergo sterilisation. Doctors reckon that tubectomies are about 10 times more common in India.

“In male sterilisation, surgeons cut and seal the tube that carries sperm from the testicles to the penis. This is far less painful than female sterilisation that involves cutting, sealing or blocking the fallopian tubes which requires the entire abdomen of a woman to be cut open,” explains Dr. Pratibha Mittal, senior gynaecologist and obstetrician, Fortis Hospital, New Delhi.

The Family Planning Association of India (FPAI), Bengaluru chapter says it receives requests from 70 to 80 women for tubectomy every month. “Rarely, if ever, does a man enquire about vasectomy,” stated a doctor.

According to health activists, rural women are under enormous pressure from husbands and in-laws to not go in for any oral contraceptive method or injections. Hence, they’re left with no option but to opt for surgery. The women are also offered all kinds of petty inducements to undergo sterilisation surgery highlighting the risks women face in reproductive health in a country battling high rates of poverty. Everything from washing machines to blenders to cash incentives are used to lure women to opt for sterilisation.

Health workers say sterilisation targets set by the government also push women into surgery. It is due to regressive societal attitudes that even the government’s marketing and advertising campaigns for family planning programme emphasise promotion of contraceptive pills that are used by women, instead of condoms used by men to tackle the issue of population control. “The government’s overemphasis on female sterilisation is following the easy way out thereby avoiding the difficult task of educating a vast population about other options. Teaching poorly educated women in remote communities how to use pills or contraceptives is more expensive than mass sterilisation campaigns,” says Neha Kakkar, a volunteer for non-profit Family Planning Association of India that promotes sexual health and family planning in India.

Sterilisation camps were started in 1970 under the family planning programme in India with the help of the UN Population Fund and the World Bank. However, they acquired infamy during the 22-month-old Emergency in the mid-1970s when the then Prime Minister Indira Gandhi suspended democratic rule and state-funded organisations unleashed a draconian campaign to sterilise poor men through coercive means. Hundreds of men — some as young as 16 or 17, some even unmarried — were herded into trucks and taken to operating theatres in makeshift camps. Those who refused had to face police atrocities.

Health activists say such coercion never works. “There needs to be a concerted campaign to educate men about sterilisation. Most men believe that they become sexually weak after getting sterilised which isn’t true. Wives, under pressure, then take on the onus of family planning on themselves forgetting the fact that their husbands are equally responsible for this,” explains Dr. Mittal.

Experts emphasise that a paradigm shift in attitudes is what’s needed to change sterilisation trends in the country. More so as India is all set to overtake China as the world’s most populous nation by 2030 with numbers approaching 1.5 billion. Worse, 11 per cent more male children are born every year as compared to
females, as against a benchmark of 5 per cent shows UN data deepening an already skewed sex ratio.

A 2012 report by Human Rights Watch urged the government to set up an independent grievance redress system to allow people to report coercion and poor quality services at sterilisation centres. It also said the government should prioritise training for male government workers to provide men with information and counselling about contraceptive choices. But there is little evidence that this has been implemented.

“Providing greater choice and improved access to modern contraceptives should become an inextricable part of India’s health and gender-equality programme,” advises Kakkar. “Public sensitisation campaigns about the benefits of family planning, and replacing coercive surgeries with access to a range of modern reproductive health choices, should form the bedrock of our health strategy.”