UNITED NATIONS, Mar 21 2016 (IPS) - “We, indigenous women want to be considered as part of the solution for sustainable development, because we have capabilities and knowledge, ” said Tarcila Rivera, a Quechua journalist and activist for the rights of indigenous people in Peru, at a press conference on the Empowerment of Indigenous Women. 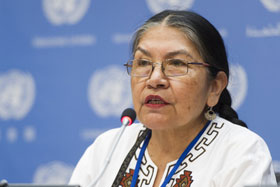 Rivera, like many other women who are fighting for the rights of indigenous people in parts of Central and Latin America, Northern Europe, Canada, Asia, Australia, New Zealand and Africa, is attending the 60th annual sessions of the inter-governmental body, UN Commission of the Status of Women (CSW60), which concludes March 24.

As a functional commission of the U.N. Economic and Social Council (ECOSOC), the CSW is meeting with representatives of Member States, U.N. agencies, international non-governmental organisations (NGOs) and civil society to discuss the status of women’s political, economic and social advancement and the elimination and prevention of all forms of violence against women and girls.

Opening the 60th CSW session, Secretary-General, Ban Ki-moon, who during his nine years in office has appointed over 150 women as Assistant Secretaries-General or Under-Secretaries-General — urged country leaders to take action to end gender inequality.

“In countries where children have “disappeared”, grandmothers stood up to demand justice. In areas ravaged by AIDS, HIV-positive mothers replaced stigma with hope. In homophobic societies, lesbian victims of rape survived and organized […] As long as one woman’s human rights are violated, our struggle is not over.”

In line with this year’s CSW theme —Women’s Empowerment and Its Link to Sustainable Development and the U.N. 2030 Agenda— indigenous women are demanding governments in their countries to recognise them as a driving force in achieving economic and social development.

In Kenya, it is mostly women who play a key role in supporting families despite growing up in a patriarchal society, explained Valerie Kasaiyian – an indigenous Maasai woman, lawyer and educator for girl’s reproductive rights.

There are indigenous women groups, such as those from Samburu, who for the past 20 years have provided alone for their entire community by building houses and schools. They also established self-sustaining economic activities by selling livestock or traditional jewels in order to get their families out of poverty, continued Kasaiyian.

Women from Marsabit, in the northern part of Kenya, developed sustainable farms, where they grew tomatoes and other crops in greenhouses, and then sold them to the community, without reliance on their male counterparts.

“Sustainable development is about preserving resources and the land for future generations. Indigenous communities, who for centuries have lived in isolation, have found their own system to work the land and to preserve it. It is in our ancestral culture and identity,” Kasaiyian told IPS.

“Yet we assist to a systematic ethnocide of our indigenous culture by the government […] where young indigenous women are meant to be homogenised and integrated into the mainstream culture,” she added.

Since the implementation of the 1995 Beijing Declaration and Platform of Action, along with the U.N. Resolution 1325, on the importance of women in peace negotiations and peace-building, and the 2007 U.N. Declaration of the Rights of Indigenous People, there have been several important steps to highlight the voices of indigenous women in the international arena. But at a slow pace.

Indigenous women and girls- who are not to be confused with rural women – have their own identity, defined by their own specific language, education, traditional knowledge and socio-economic values, remarked Rivera, who is the founder of the Center for Indigenous Cultures of Peru (CHIRAPAQ) .

However, they are mostly excluded by government policies, as they are not fully treated with human dignity, said the Peruvian activist.

“Many programs look at us as subject of assistance. But we don’t want to depend on these kind of food programs. We are trying to be considered as subject of change, and development from within, (through) our capacity,” she said.

Despite the lack of thorough national statistics, indigenous women suffer from high levels of discrimination, sexual and domestic violence, extreme poverty, trafficking, lacking in access to land rights and education and poor maternal and infant healthcare. 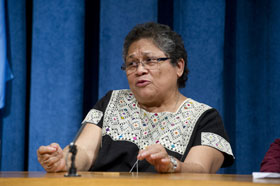 Myrna Cunningham, an indigenous Mixteca woman from the Waspam community in Nicaragua, told IPS about the problem of data disaggregation in certain countries, where indigenous people are not counted or excluded from certain indicators.

“When talking about statistics” – said Cunningham, who is President of the Center for Autonomy and Development of Indigenous Peoples (CADPI), and former chair of the U.N. Permanent Forum of Indigenous Issues – “self-identification, should be the main indicator, which can be used complementarily to other types of info-gathering questions. Also, government statistics should use more culturally sensitive indicators, which will help to define public policies and implement them.”

With the adoption of the U.N. Declaration of the Rights of Indigenous People, the U.N. set a framework that will foster the partnership between members states and indigenous communities, through dialogue, proposals and projects, in order to further implement the Declaration and recognise and protect indigenous women, Chandra Roy-Henriksen, Chief Secretariat of the Permanent Forum on Indigenous Issues, told IPS.

Kasaiyian said: “We will strongly push for a U.N. Declaration of the Rights of Indigenous Women specifically, so that women can prosecute in case of violation of their rights in international tribunals.

Indigenous women must bridge the gap between academics, professionals and activists, by establishing their own jurisprudence and theories of law regarding the eradication of violence against women and to empower future generations.”