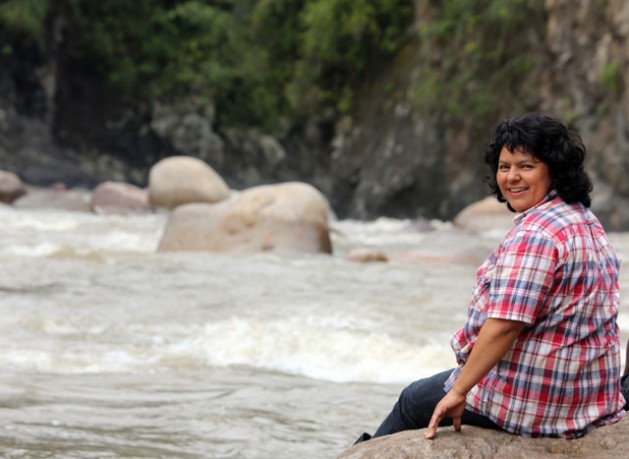 Berta Cáceres on the banks of the Gualcarque River, in the Rio Blanco region in western Honduras that she fought so hard to protect. Photo Credit: Goldman Environment Prize

COLOMBO, Sri Lanka, Mar 15 2016 (IPS) - Berta Isabel Cáceres Flores, was in her early 20s when she co-founded the Council of Popular and Indigenous Organisations of Honduras (Cophin), a group that campaigned for the rights of indigenous communities in the Central American nation.

Influenced by a mother, who took in fleeing El Salvadorian refugees, Cáceres was fully committed to her cause. She told friends and colleagues that her struggle was against ‘deadly powers’ that put profit before the rights of her people. In the last two decades, she saw colleagues being threatened, attacked and killed, but her work only got bigger.

Twenty three years after she formed Cophin, Cáceres paid the ultimate prize. She was gunned down in her home after assassins had stormed it around 1 am on March 3.

Before her death, Cáceres had received dead threats and had in fact moved house for safety. Recently, she had been in the forefront of protests against one of the biggest hydropower projects in Central America. The envisioned four dam Agua Zarca project on the Gualcarque river was being built by a local Honduran firm DESA but initially had the backing of China’s Sinohydro and the World Bank’s private sector financier International Finance Cooperation (IFC).

Both pulled out following the protests and Cáceres and others had been publicly calling for other backers like the Dutch Development Bank, the Finnish Fund for Industrial Cooperation and Germany’s Siemens and Voith to follow Sinohydro and IFC.

Her work won worldwide recognition. “With her people she made the World Bank withdraw from Honduras. It is precisely because of this struggle of Cophin led by her and for more then 20 years of resistance to new colonial powers that she won the Emma Goldman Prize in 2015,” Tatiana Cordero, executive director, Latin America at Urgent Action Fund, an international organisation that works for women’s rights, told IPS.

Such global accolades only strengthened Cáceres’ resolve to campaign more vigorously against the dam project, but they obviously need to give her more protection. Less than two weeks before her assassination she led a massive march in Rio Blanco that ended in a confrontation with government security personnel and employees from DESA.

“She was a global voice for the rights of indigenous people to water, food, land and life. She bravely challenged those in positions of power to do what was right — instead of what would result in the most profit,” said Terry Odendahl, President and CEO, Global Greengrants that has funded over 3,000 grants in over 145 countries to the tune of over $45 million said.

The brazen murder of a high-profile activist sent shockwaves through the global environmental rights community. UN Special Rapporteur on the rights of indigenous peoples, Victoria Tauli-Corpuz said she was horrified at the murder. Tauli-Corpuz had met Cáceres during a visit in November 2015 and had been personally appraised on the threats.

Tauli-Corpuz said that the international community should work together to bring such wanton violence faced by indigenous activists to a stop: “It is time for the nations of the world to bring perpetrators to justice and to protect indigenous rights activists peacefully protesting the theft of their lands and resources.”

That grass roots environmental activists are under threat across the globe has been known for awhile now. Global Witness found that in 2014, 116 environmental activists were murdered, almost double the number of journalists killed in the same period. Over 40 per cent of the victims were from indigenous communities while three quarters of them were from Central or South America. Between 2002 and 2013, at least 903 citizens engaged in environmental protection work were killed world over.

“The case of Cáceres is emblematic of the systematic targeting of environmental defenders in Honduras. Since 2013, three of her colleagues have been killed for resisting the Agua Zarca hydro-dam on the Gualcarque River, which threatens to cut off a vital water source for hundreds of indigenous Lenca people,” Global Witness said soon after the murder. The organisation also found that such attacks do not get much attention in the international press.

Activists say that the international community needs to understand the real dangers faced by the likes of Cáceres and the impunity enjoyed by the perpetrators. “There is a difference between realising the danger and holding the people and systems accountable. This assassination took place because of the Honduran government’s inability to ensure indigenous people and women can carry out their legitimate work without fear.” Odendahl said.

Aleta Baun, an Indonesian activist from the western half of Timor, who has been campaigning on behalf of her Mollo people can relate easily to the Cáceres predicament. Baun, who also won the Goldman Environmental Award in 2013, has survived at least two assassination attempts.

“You feel completely alone when such attacks happen,” she said of an attack in when she was waylaid by 30 men. She said that there has been no serious pressure brought on by local governments and international players to curb such attacks.

Suryamani Bhagat an activist with Save the Forests of Jharkhand Movement in the eastern Indian state of Jharkhand also shares these sentiments. “I work with a lot of women, so I feel safer,” she said.

But once they are alone, that protective shield shatters and leads to deadly consequences.