‘Worse Than World War I’ 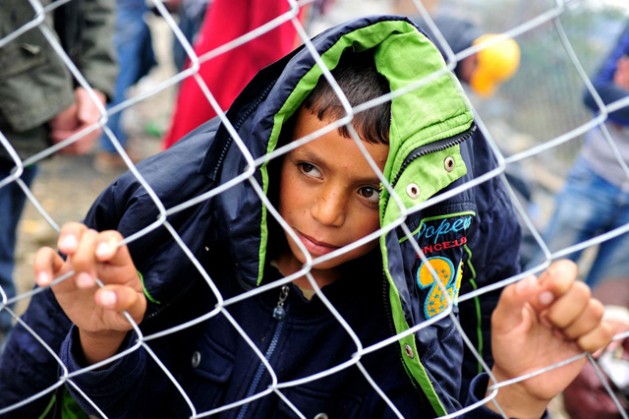 A boy clutches and looks through a chain-link fence, on a rainy day near the Former Yugoslav Republic of Macedonia town of Gevgelija, on the border with Greece. September 2015 . Credit: UNICEF/UNI196199/Georgiev

MADRID, Mar 14 2016 (IPS) - When the leaders of 28 European states enjoy again this week their exclusive flights, luxurious suites and official limousines, to meet for a new summit in Brussels to adopt a final decision on their proposed plan of using refugees as bargaining chips, 20.000 Syrians will most probably be still starving in the Idomeni camp in Greece, in a situation that has been described as “worse than World War I.”

Meanwhile, European top diplomatic, legal and juridical experts have been working round the clock to find the best possible ‘politically-correct’ make-up to covert a new draft, camouflaging the one that the European Union leaders reached with Turkey during their March 7 summit in the Belgium capital.

But regardless of any “official” formula that may come out of the new summit, the fact is that the EU plan aims at getting rid of asylum seekers, refugees (and by the way also migrants) in a flagrant violation of all international treaties and conventions that they all signed.

Once the refugees have been sent back to Turkey, the EU may then select among them those who the EU may wish to take as asylum seekers.

The European formal argument is that the successive refugee waves may have included some human beings coming from Iraq and Afghanistan—two countries that were invaded by US-European-led military alliances, and therefore may be classified as just “migrants”

A humanitarian worker with Doctors Without Border/Medicins Sans Frontieres told Spanish TV networks La Sexta: “the situation is worse than World War I.” (1914-1918).

The Greek authorities are currently making huge efforts to “re-distribute” the more than 20.000 refugees stranded in the Idomeni camp—which has capacity to host A mere 1.500—in other so-called improved locations.

Is Turkey Really the Big Winner?

Strangely enough, the European plan has been promoted by many European media as a result of Turkish heavy pressure on the EU.

Also by some politicians like Philippe Lamberts, Belgian MEP and co-chair of the Greens/EFA group in the European Parliament, who said “Europe’s governmentshave shown ‘unconscionable cowardice’ over migration crisis”.

Or like international affairs analyst Finian Cunningham, who for over 20 years worked as an editor and writer in major news media organisations, including The Mirror, Irish Times and Independent, and who wrote: “Smelling EU fear, Turkey moves in for $6.6 billion kill”.

Anyway, in addition to the growing, inhumane suffering, the plan may well mark the beginning of the end of Europe, as we know it. Robert Savio, founder of IPS-International News Agency, and of Other News, summarised this evident risk in his lucid analysis “Can Europe Survive – Back to a Better Yesterday?”.

And the Winners Are… The Human Traffickers!

The European plan is expected to end up in a loose-loose game, with growing waves of xenophobia and extreme right movements, like what has just happened in Germany with Chancellor Angela Merkel’s party suffering major setback in key regional elections on 13 March over her liberal refugee policy.

Let alone the clear erosion of human rights in Europe as a consequence of violating international laws by repatriating asylum seekers to such an unsafe country, Turkey, that more and more crack down on social protests and the media.

The big winners of this EU-Turkish refugee “bazaar” are obviously the criminal groups who obtain multi-millionaire benefits from desperate humans, and who are now looking for new routes, including sending them to Russia and from there to the Baltic states, or take them from Turkey to Libya and from there to Italy or otherwise move them to Morocco to dump them in Spain.