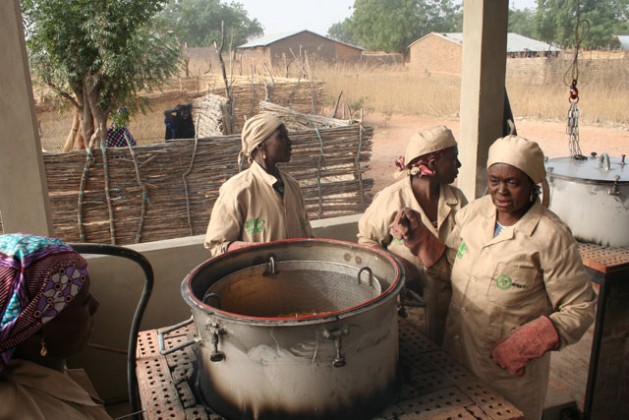 MALANVILLE, Benin, Apr 18 2016 (IPS) - Salabanya Tabaitou no longer squints from the irritating wood smoke each time she has to parboil her rice paddy.

Now Tabaitou feeds logs into a chute of a specially designed brick stove with a chimney that draws away the smoke. The stove with a stainless steel parboiling vessel cooks her rice in 20 minutes – something she would have spent two hours doing using the traditional method.

“The stove has made parboiling a pleasant activity, less strenuous and something I look forward to doing because I work with a team unlike in the past when I toiled alone,” Tabaitou says about the innovative heat efficient stove and GEM parboiler developed by AfricaRice with women farmers in mind.

Parboiling, a task largely done by women, involves partially boiling rice in the husk before it is milled. The process protects the rice from breaking during milling, preserves nutrition and enhances quality. Parboiled rice is competitive, fetches higher price and is in demand in Benin and many parts of west and central Africa.

Rice is a staple in many parts of Africa but the continent is eating more rice that it produces locally. Africa produced over 14 million tonnes in 2015 and is a source of income for more than 35 million smallholder farmers.

New technologies introduced by AfricaRice – a pan African research organisation – are helping women produce better quality, nutritious local rice that earns them more income on the market. Half of the rice eaten in Sub Saharan Africa is imported taking away local jobs and income.

Scientists from AfricaRice — under the support to agricultural research for development of strategic crops (SARD-SC) programme funded by the African Development Bank (AfDB) — introduced the ‘innovation platform’ (IP) approach in Benin.

Innovation platforms are formal groupings bringing together in value chains in a given agriculture commodity with the aim of boosting information and knowledge sharing, and learning, to enhance the adoption of technological solutions and institutional change. Furthermore, the platforms show usefulness of new technologies and innovations designed to improve rice production, productivity and value addition.

Two such platforms have been introduced in Benin: the Glazoué IP in central Benin in the rainfed rice environment and the Malanville IP in the irrigated rice environment, some 750 km in the north of the capital, Cotonou.

Tabaitou is a member of Malanville IP and one of the more than 500 women trained in parboiling. The GEM parboiler has revolutionised how women prepare rice, achieving the triple benefits working with ease, obtaining high quality rice, and earning better income from it.

“We learnt a lot from other women in the Glazoue IP and we are confident this platform and the technologies that we have access to for parboiling our rice will increase our income because the GEM parboiling technology has reduced the labour and the rice we produce is of better quality and over less time to parboil,” Tabaitou told IPS.

Livelihood changes in Glazoué motivated AfricaRice to replicate the IP in Malanville and about 1,000 women households have been empowered through the innovation platforms.

Dr. Sidi Sanyang, leader of the Rice Sector Development Program and SARD-SC project coordinator for AfricaRice says in the Glazoue IP, research evidence shows that the women have doubled the quantity and income from parboiled rice compared to before they started using the GEM technology.

“There were selling less than 2 tonnes of rice a month now they are selling up to 5 tonnes of rice per month in Glazoué and the Malanville IP is promising to achieve the same success for women parboilers,” said Sanyang. “The technologies and innovations we have introduced are aimed at helping farmers especially women drive the market and in Malanville, there have a huge market potential in nearby Nigeria, a high consumer of parboiled rice.”

Women make up more than 50 per cent of rice farmers in Africa, but are a minority in enjoying the same opportunities that men have in rice farming. Women lacked access to seed, tools and implements and effective market opportunities that would make them competitive. This is changing thanks to the IP approach which has availed appropriate technologies for women rice farmers to produce more, high quality local rice that increases their food, nutrition and financial security.

The GEM parboiling technology uses less wood and water than the traditional system and is equipped with hoists and rails to lift and move the heavy vessels in which the paddy is steamed with ease by women.

With the traditional system, the women parboilers were processing only about 120 kg of paddy per session. Using GEM technology, they can process up to 400 kg of paddy per session and are now aiming to increase the amount to 1 tonne. Besides, the quality of the parboiled rice is similar to that of premium imported rice. Research trials conducted by AfricaRice showed that, with GEM technologies and innovations, there was less burned grains and impurities compared to using the traditional parboiling system.

SARD-SC project coordinator, Dr. Chrysantus Akem, indicated that the rice value chain of the SARD-SC project covers 11 countries in West, East and Southern Africa and he is looking to setting up of the GEM innovation platforms in Nigeria and Niger. In Nigeria, there is high demand for parboiled rice and the need for higher capacity GEM parboilers.

In addition to the GEM parboiling technology, AfricaRice is also promoting handy weeders and a mini Axial Flow Thresher (ASI), an improved rice thresher and cleaner suitable for women who are involved in the planting, weeding, harvesting and post-harvest operations of rice.

“Rice is an important cash crop for women as they play an increasingly important and recognized role in the whole rice value chain, from seed to the table/mouth,” says Afiavi Agboh-Noameshie, a gender specialist at AfricaRice.

Agboh-Noameshie says in terms of technology development and dissemination in rice production, there was a huge gender bias because women were not considered as farmers but “assistants” to the husbands.

“All the technologies were developed thinking that it is only men that are farmers,” Agboh-Noameshie, told IPS adding that the use of these technologies by women includes significant time saving, reduction of workload and significantly reduced health risk, improvement of productivity, efficiency, quality of final rice product to consumers, and increased income for the women.