No Farmers, No Food — True But Not Enough

Evelyn Nguleka is president of the World Farmers Organisation, an international organisation of Farmers for Farmers, which aims to bring together all the national producer and farm cooperative organisations with the objective of developing policies which favour and support farmers' causes in developed and developing countries around the world. Nguleka introduces the key issues discussed at the May 4-7 2016 WFO conference in Lusaka.

LUSAKA, May 6 2016 (IPS) - Agriculture is the primary sector of all economies. It is the sector responsible for granting food and nutrition security to all human beings. Consequently it is responsible for social stability and health. And it provides work opportunities to families, men, women and youth, and largely contributes to the country Gross Domestic Product (GDP). 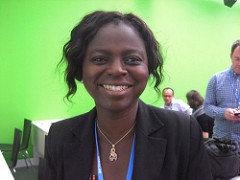 However, this would never be possible without the support of our partners and friends from the public and private sectors, from local and international arena, who believe in our daily work and in our central role for the socio-economic well being of this planet.

It is to the above extent that the 2016 General Assembly of the World Farmers’ Organisation, WFO, has been held under the overarching theme of “Partnership for Growth”, with a view to promoting the importance of a holistic approach to the agricultural sector, where different actors stand together for the same goal:

Implementing sustainable food systems ensure that farmers of the world gain an effective position in the food chain look after the environment to implement together the Sustainable Development Goals and the overall agenda 2030.

Establishing effective partnership is and remains a great priority to the WFO.

For this reason, WFO has accepted the burden and the honour to act as the reference organisation representing the world farmers’ community at the most relevant policy processes in agriculture, including:

As farmers, we are on the front line of the climate change agenda, we are directly impacted by climate change and they are vital in implementing many of the solutions the world needs in order to adapt and mitigate it.

Most of the WFO’s success lies in its constituency; a farmer organisation, made by farmers, serving the interests of farmers of all scale, small, medium and large who are able to engage in dialogue and advocate for the conception of policies that create an enabling environment for farmers and their organisations, allowing them to develop and thrive.

Nowadays, the estimated population growth, the changing climate, the competitive markets are challenging farmers more than ever. In order to tackle these new challenges, introducing sustainable agricultural practices and increasing productivity are highly important to the farmers themselves as well as the entire society.

The slogan of the Zambia National Farmers’ Union (ZNFU) which I have the honour to chair is ‘No Farmers, No Food’.

But while this is an indisputable fact, farmers now a day need to develop the right skills and knowledge needed to effectively improve their capacity.

We need a secure access to the land, ownership and control over land, access to productive resources and inputs, including modern technology, markets, inputs and financial resources.

Moreover, farmers need to develop their agricultural management and marketing skills to efficiently strengthen their entrepreneurial skills. In this respect, agricultural extension and advisory services are increasingly seen as a key means to build farmers’ capacity.

These services help farmers deal with risk and change, by providing options and capabilities to make the right choices at the right time. The services assist rural actors to share technology and practices, and support farmers to acquire a better position in value chains and markets.

The global economy is based on the assets of efficiency and profitability. Farmers, likewise all other categories of entrepreneurs, deserve to see their work duly compensated by an appropriate income and their products effectively absorbed by the market.

Farmers are ready to invest their days in the field, while looking for new solutions to increase the profitability of their farm while taking care of the quality of food produced. In this context, there is only one path farmers can follow to achieve this goal, which is running the way of Innovation.

Innovation and new technologies stand at the basis of modern economy as agents of solutions for making economic systems more efficient. Farmers from all over the world, in their capacity of economic actors, need to access innovative techniques for making their business more profitable.

This view and this stand are not solely those of the WFO’s and the farmers. Leading international organisations specialised in agriculture and food share the WFO’s position.

The United Nations Food and Agriculture Organisation (FAO) understands the enormity of the challenge ahead, and the importance of the producers of food – the farmers – to meet the set target.

In his message to the WFO conference, the FAO Director General, General José Graziano Da Silva, recalled in this respect that the international community has committed to end worldwide hunger and poverty in 15 years, with the endorsement of the 2030 Agenda.

Mr Graziano has also renewed FAO full engagement to help address this challenge. “But we know that this is only possible with solid partnerships, especially with non-state actors,” he said, while highlighting the strategic role of farmers not only in producing food but also in the preservation of the environment, considering the impact of climate change on agriculture – singled out by scientists as the most vulnerable sector.

In view of all the above, we all call for solid support for farmers, a support that should be placed at the core of any strategy for increased responsible investments in agriculture,” stressing the importance of the Principles for Responsible Investment in Agriculture and Food Systems.

Developed by Committee on World Food Security (2014), the guidelines draw attention to rights and livelihoods of rural populations and the need for socially and environmentally sustainable agricultural investments.

They cover all types of investment in agriculture, including between principal investors and contract farmers.

The Principles are based on detailed research on the nature, extent and impacts of private sector investment and best practices in law and policy.

This was on the realisation that land tenure still represents one of the major challenges that farmers face, especially in developing countries. In particular, many small-scale farmers, especially women, work on land that they don’t own, exacerbating their poverty and lack of political power.

The role played by agriculture and farmers in tackling many of the goals set by the new agenda is fundamental, as it encompasses several of the proposed targets.

We also fully share what Given Lubinda, Zambia’s minister of agriculture, has said– “Since Africa is the home of small-scale farmers who create wealth and feed the world,” access to land, ownership and control, and modern technology, markets and financial resources are essential elements to enable them improve agricultural efficiency and productivity.

For her part, while adding impetus to the land and food security nexus as a key element in the achievement of the SDGs, the chair of the United Nations Committee on World Food Security (CFS), Ambassador Amira Gornass of Sudan also agreed that, “Farmers are the backbone of any efforts for food and nutrition security.”

We have to move ahead and we willing to. We have to invest in our farmers, in our agriculture, in our land. What is at stake in nothing less than our food, our health, and our future, not only in Africa but also all over the world.