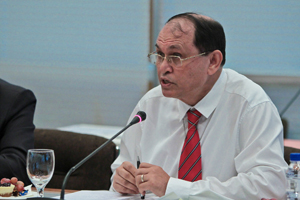 Collectively, the Asia & Pacific region is one of the lowest-scoring regions for food security, coming ahead of only sub-Saharan Africa.

However, this low overall score disguises striking differences between wealthy and underdeveloped nations of the region.

By contrast, poor countries such as Bangladesh, Nepal, Myanmar, and Cambodia have some of the highest levels of food insecurity seen around the world.

A three-day food security forum, scheduled to take place June 22-24 at the ADB headquarters in Manila, is billed as a key platform for all stakeholders to exchange knowledge and build partnerships for an innovative strategy for a hunger-free Asia Pacific by 2030.

Dr. Mahfuz Ahmed, Technical Adviser, Rural Development and Food Security, at ADB’s Sustainable Development and Climate Change Department told IPS that while many of the economies in the Asia and Pacific region are evolving from low-income to middle-income countries, the largest numbers of the food and nutrition insecure people in the world are still found in the region. “And they face new challenges to produce and access more nutritious and safe food for its growing populations.”

He pointed out that climate change, and economic and demographic transformations will have a major influence on the future of food in the region.

“ADB’s support to agriculture and natural resources in the future will emphasize investing in innovative and high-level technologies, for which partnership building, experiential learning and knowledge sharing will be crucial,” said Dr Ahmed.

First, in order to feed these 0.8 billion additional people by 2050, food production has to increase. Secondly, with the increase of total population, the demographic composition will also change to an inverse-pyramid shape, including the farming community.

As a result, according to ADB, the agriculture sector may suffer from shortage of labour and food security may be at risk unless less labor-intensive technology is not introduced in the sector.

The nature of the food security challenge in the Asia Pacific region cannot be fully understood just by the current context which is constantly changing. Overall food security in the region will become increasingly complex due to various emerging challenges.

These challenges, says ADB, can be broadly categorized into three groups; (i) population growth, and changes in demographic and economic structures, (ii) changes in composition of crop market, and (iii) climate change and natural disaster.

Frederic Mousseau, Policy Director at the Oakland Institute, told IPS Asia-Pacific is still the region with the largest number of hungry people in the world.

For the largest Asian countries such as China, India or Indonesia, food sovereignty has been upheld has an overarching principle as seen during the 2008 food price crisis when countries regulated food prices and food supply, including export bans of food commodities, widely criticized by the proponents of free trade, notably international financial institutions, he noted.

Indonesia was for instance successful in preventing the transmission of high food prices to domestic markets.

He said the price of rice actually decreased in Indonesia in 2008 while it was escalating in the rest of the world thanks to public interventions to prevent this transmission with a mix of trade facilitation policies (cutting import tariffs or negotiating with importers) and trade restrictions or regulations (such as export bans, use of public stocks, price control, and anti-speculation measures).

However, said Mousseau, a number of Asian governments pursue today policies that seriously threaten the food security and the well being of the poorest people, domestically and abroad, as seen with the forced displacement of hundreds of millions of farmers in China, the land grabbing and corporatization of agriculture in India, the grabbing of land in Africa by Indian companies, or the plundering of natural resources in Pacific Islands and Africa by Malaysia or Indonesia.

In those regions, the biggest obstacle continues to be gender discrimination and the patriarchal mindset which gives rise to it.

Social norms continue to have women and girls eat last and least, and marrying too young – giving rise to the perpetuation of a cycle of malnutrition, he pointed out.

The same mindset marginalizes “women’s priorities” such as WASH (Water, Sanitation and Hygiene), early childhood education and health care which are critical to nutrition security.

Coonrod said top-down agricultural policies favor nutrition-poor food grains rather than nutrition-rich crops such as fruits and vegetables, giving rise to the “enigma” that nutrition goes down as production goes up.

Meanwhile, global food security continues to be threatened by several factors. According to the German Renewable Energy Agency, 44 percent of food grains are currently used as food for human beings, 35 percent as animal feed, 6.0 percent as input for biofuel and the rest as “other uses.”

The most important question, says ADB, is how the increased use of grains for biofuels is going to affect the food security in the Asia-Pacific region.

And most importantly, each dimension of food security is going to be affected by climate change.

According to ADB, there is evidence of prominent increases in the intensity and/or frequency of many extreme events such as heat waves, tropical cyclones, prolonged dry spells, intense rainfall, tornadoes, snow avalanches, thunderstorms, and severe dust storms in the region.

“Therefore, climate change poses a serious and additional threat to poor farmers and rural communities in the region who live in remote, marginal areas such as mountains, drylands and deserts; areas with limited natural resources, communication and transportation networks and weak institutions”.

In particular, according to ADB, different climate models indicate temperature increase in the Asia/Pacific region by about 0.5-2°C by 2030 and 1-7°C by 2070. Temperatures are expected to increase more rapidly in the arid areas of northern Pakistan and India and western China.

ADB points out that it’s unwavering commitment to promote food security in the Asia Pacific region is reflected in its funding of hundreds of agriculture and natural resources projects.

The main objective of the forum is to provide a platform for all, including partner institutions, government leaders, private sector champions, civil society organizations, experts, farmers, youth leaders, and development practitioners to discuss strategic visions, share experiences and innovations to engineer new approaches and investment while consolidating the existing ones.

The specific objectives of the forum are: to facilitate knowledge exchange and dissemination among relevant stakeholders leading to implementable actions and strategy; (b) to showcase some state-of-the-art agricultural technologies and products, and (c) to facilitate partnership and networking to work together to promote food security in the Asia Pacific region.