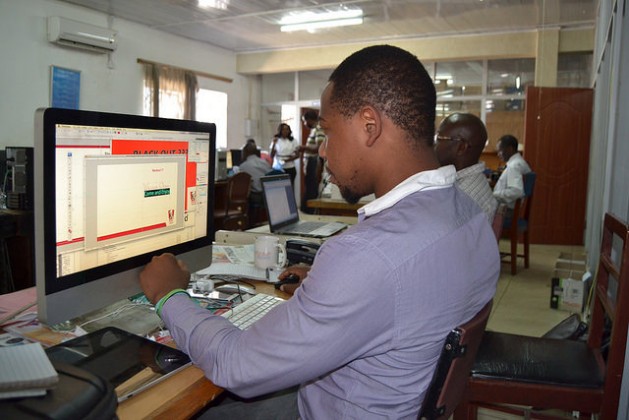 Given Mbwira (left) and Obed Nkhoma on the internet, some of the people who will benefit from cheaper, affordable and faster Internet due to the WhiteSpaces Project. Photo taken at the offices of The Nation in Blantyre. Credit: Bobby Kabango/IPS

BLANTYRE, Nov 1 2016 (IPS) - This month, many Malawians, especially those in rural areas, will be able to start accessing the internet as easily as opening a tap to get water.

At least that’s the dream of C3, a communication services provider and the first commercial entity to deploy countrywide TV White Spaces-TVWS for a trial period of nine months.

Most Malawians live in rural areas. The majority of them are poor and only 6.5 percent are connected to the internet. To reach this population, C3 is building a new network that relies on unused frequencies in the television spectrum, called “TV white spaces”, with plans to extend it throughout the country.

The connectivity is then distributed to the user communities with a new, efficient and affordable last mile technology using TVWS and Dynamic Spectrum. Users then access the network via Wi-Fi.

“It’s a cheap and effective way of having internet,” said 17-year-old Elizabeth Kananji, a second year student at the Malawi Polytechnic.

“Not all people are able to access the net as they have to pay the service providers, which is a challenge with the high prices, but with TVWS you don’t have to pay as long as you have your gadgets. You’re good to go, which is amazing,” she told IPS.

The project is aimed at promoting research and development in the field of ICT, according to MACRA’s Deputy Director of Spectrum Management, Jonathan Pinifolo.

The TVWS was piloted in Zomba in 2013 at St Mary’s Secondary School, the Malawi Defense Force’s Air wing, Pirimiti Rural Hospital and the Geological Survey Department.

Other countries that carried out similar pilot projects include U.S., United Kingdom, South Africa and Kenya. But Malawi will be the first country in the world to deploy TVWS nationwide.

The project has received praise worldwide, with the United Nations and the International Telecommunications Union saying it is a viable and cost-effective way to reach rural areas with internet services.

In Malawi, C3 is the only company that has shown interest in running the project, according to MACRA.

“We are anticipating initial launch of some parts of the infrastructure in November, however, since we are not only looking at TVWS we are building towers, installing Wi-Fi hotspots, backhaul links, some of these will be ready before end November. We can then announce the official launch date,” C3’s Richard Chisala told IPS.

“We did research where we assessed all the internet service providers in Malawi and found out that internet is more expensive in Malawi than in Kenya, for example. This has resulted in only 10 percent of the population accessing the internet. This is mainly due to greed and inefficiency,” added C3’s CEO Chris Shaeke.

“So we want to change this…even our license from MACRA states that we have to focus on the rural areas.”

Shaeke says their service will be reliable and affordable: “Because there’s intermittent power supply in Malawi, we are running all our equipment on solar. In addition, we have set up our infrastructure where rural people can easily access the internet right where they are.”

Shaeke told IPS that they have partnered with the Malawi Posts Corporation (MPC) to allow people in rural areas access to the internet through their mailboxes. He says a person will just plug in their device and connect to the net as like people do when they want to get electricity or water, for example.

Currently, C3 is acquiring their infrastructure with funding from Microsoft, which also funded a similar project in Kenya.

“We’re getting financial and technical support from Microsoft…we’re a grant recipient of the Microsoft Affordable Access Initiative which aims to empower the billions of people worldwide who do not have affordable access to the internet,” said Chisala.

“We have a data centre in Lilongwe and a disaster recovery centre in Blantyre…these two will be the first data centres in Africa to provide what we call cloud services…we are an open access network.”

Cloud computing and storage solutions provide users and enterprises with various capabilities to store and process data in third party data centers that may be located far from users.

Among the agencies expected to utilise the C3 network are non-governmental organisations, ministries and department agencies, micro- and small or medium enterprises as wells as resellers.

One of the companies showing interest is Health Point Media. HPM plans to provide audio and visual messages to district hospitals and health centers. They will be installing displays (TV monitors) in all health centers in Malawi, according to the company’s head, Tapiwa Bandawe.

“We are targeting our messages to the 1.9 million people who visit these health facilities every month. Because the patient to health worker ratio is so high in Malawi (one to 10,000), it is difficult for the health personnel to spend time teaching people how they can prevent diseases, for example. So through our messages, people are able to learn while waiting to get help at the hospitals,” Bandawe told IPS.

Elizabeth Kananji, the student at Malawi Polytechnic, says she was inspired by the TVWS project to study Electronics and Telecommunications Engineering.

“I got acquainted with the project in 2013 when they came to my former school (St. Mary’s Secondary) to install antennas during the pilot phase. At first I wasn’t sure what to major in college but TVWS showed me how telecommunications can change the world,” she told IPS.