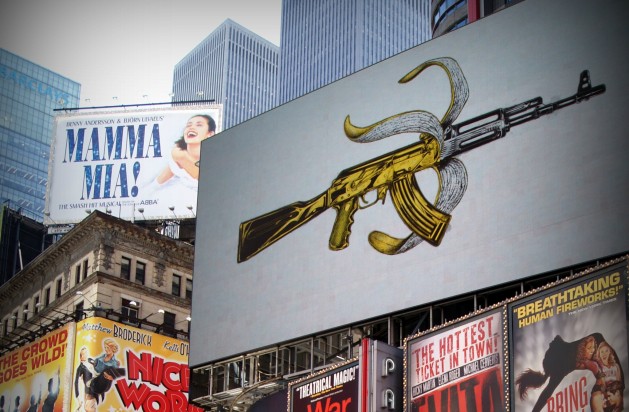 A campaign in support of the Arms Trade Treaty argued that weapons were subject to fewer regulations than bananas. Credit: Coralie Tripier / IPS.

UNITED NATIONS, Dec 27 2016 (IPS) - Two years after the UN Arms Trade Treaty entered into force many of the governments which championed the treaty are failing to uphold it, especially when it comes to the conflict in Yemen.

“In terms of implementation, the big disappointment is Yemen,” Anna Macdonald, Director of Control Arms, a civil society organisation dedicated to the treaty, told IPS.

“The big disappointment is the countries that were in the forefront of calling for the treaty – and indeed who still champion it as a great achievement in international disarmament and security – are now prepared to violate it by persisting in their arms sales to Saudi Arabia,” she added.

The Saudi-led international coalition has been responsible for thousands of civilian deaths in Yemen, and Saudi Arabia is known to have violated humanitarian law by bombing civilian targets, including hospitals.

The conflict in Yemen – the poorest country in the Middle East – has displaced over 3 million people since it began in March 2015 according to the UN.

However many countries, including the United Kingdom, United States and France, that have signed up to the Arms Trade Treaty continue to sell weapons to Saudi Arabia, despite this violating their commitments under the treaty.

“The big disappointment is the countries that were in the forefront of calling for the treaty ... are now prepared to violate it by persisting in their arms sales to Saudi Arabia,” Anna Macdonald, Control Arms.

Currently 90 UN member states are parties to the treaty, which Macdonald says is a relatively high number for such a new and complex treaty, but the goal remains universalisation, she adds. The treaty entered into force on 24 December 2014. However while the U.K. and France have ratified the treaty, the U.S. has only signed the treaty.

Parties to the treaty are obligated to ensure that weapons they sell will not be used to violate international humanitarian law, commit genocide or commit crimes against humanity.

The U.K.’s sale of weapons to Saudi Arabia has been the subject of intense debate in British parliament.

Saudi authorities recently confirmed that they have used UK-made cluster munitions in Yemen.

“Evidence of cluster munition use has been available for almost a year, but the U.K. has ignored and disputed it, trusting instead in the Saudi-led coalition’s denials,” said Macdonald.

“The UK is continuing to ignore the vast amount of information of violations of human rights and the laws of war in Yemen, (recent developments) make even plainer how unfeasible such a position is.”

The UK which sold the weapons to Saudi Arabia in 1989 has since signed up to the Cluster Munitions Convention, which prohibits the sale of cluster munitions because of their indiscriminate nature, Macdonald added.

Meanwhile recent reports suggest the United States is curtailing at least some of its arms sales to Saudi Arabia.

“The U.S. has said it will halt the sale of precision-guided aerial bombs to Saudi Arabia because they have seen “systemic, endemic problems with Saudi Arabia’s targeting” that the U.S. says has led to high numbers of civilian casualties in Yemen,” said Macdonald.

However she noted that it is hard to know what effect this will have on policies under the incoming Trump Republican administration.

According to research published by the Stockholm International Peace Research Institute (SIPRI) the world’s top three arms exporters are the United States, Russia and China.