Mário Soares, a Rebel with a Cause – Freedom 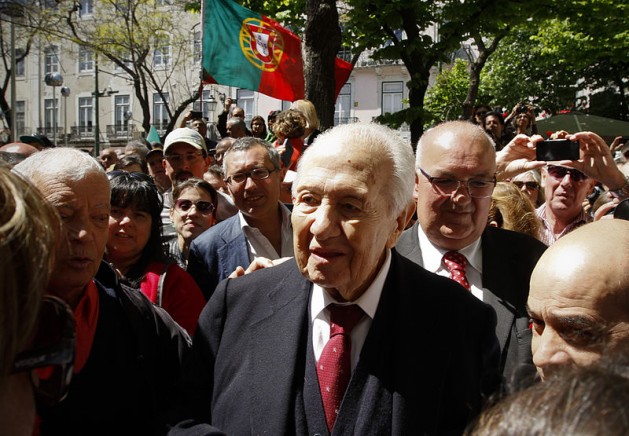 LISBON, Jan 10 2017 (IPS) - Hardly a leader could reap so much respect, even from most relentless political rivals, both throughout his life and after his death on Jan 7 at the age of 92, like Portuguese Mário Soares.

Characterised as “an indefatigable political animal,” by the New York Times, United Nations Secretary-General António Guterres hailed the commitment to freedom and democracy that made Soares “one of those rare political leaders of true European and global stature.”

The UN chief, who is himself Portuguese, said Soares has left an “indelible mark” on political life in Portugal, the result of his “steadfast and courageous political commitment and the principles and values that he consistently pursued throughout his life. Liberty was always his foundational value.”

To a great extent, Guterres said, we are indebted to him for the democracy, the freedom and the respect for fundamental rights that all Portuguese have been able to enjoy in recent decades, and that are today established values in our country.”

Paying tribute to Soares, “who will, I am certain, remain in our memory and in the history of our country as a man of freedom, who wanted all to live in liberty, and fought for his entire life to realize that hope,” the UN Secretary-General added that the late leader’s legacy goes far beyond Portugal.

Indeed, this is not only because Soares was responsible for Portugal’s full integration into the international community, “but also because his commitment to freedom and democracy make him one of those rare political leaders of true European and global stature,” concluded Guterres.

Mário Soares was Prime Minister of Portugal from 1976 to 1978 in the aftermath of the Carnation Revolution that ended decades of right-wing dictatorship. He returned as PM in the early 1980s, and served as Portugal’s president between 1986 and 1996.

After flirting briefly with communism at university and then embracing Portugal’s democratic movement as a Socialist, Soares was jailed 12 times and then exiled for his political activities during the dictatorship of Antonio de Oliveira Salazar.

Soares played a key role after the 1974 Carnation Revolution –a military-led coup that soon turned in a massive popular movement of civil protest characterised by carnations that were handed out and placed in the barrels of soldiers’ rifles and tanks—that put an end to 48 years of Salazar rule.

A fierce critic of the military Junta that ruled Portugal for the next two years, Soares in 1976 became the first post-war democratically elected prime minister.

Soares spearheaded the country’s entry into the European Union. But, in recent years, he became a vocal critic of the austerity policies associated with the massive euro-zone bailout Portugal sought in 2011.

He left the presidency in 1996 after the maximum tenure in the office permitted under the constitution, with his popularity at a peak. For years, he remained one of the country’s most influential politicians.

“President Mário Soares was born and graduated to be a fighter, to have a cause to fight – freedom,” President Marcelo Rebelo de Sousa said. “Soares never gave up on a free Portugal, a free Europe, a free world and what was decisive… he was always victorious.”

IPS President and Member of International Board of Trustees

As part of his unflagging commitment to freedom –in this case freedom of expression—lawyer, historian and politician Mário Soares, chaired the International Board of Trustees of Inter Press Service (IPS).

He graduated in Historical-Philosophical Sciences in 1951 and in Law in 1957 at Lisbon University. He taught at a private secondary school and was director of the Colégio Moderno, in Lisbon.

Soares practised law for some years and during his exile in France he was “Chargé de Cours” at Vincennes University and at the Sorbonne. He was associate professor at the Faculty of Arts of Haute Bretagne (Rennes).

More recently, he was guest professor in International Relations at the School of Economics of the University of Coimbra.