Dr. Shamshad Akhtar is an Under-Secretary-General of the United Nations (UN) and the Executive Secretary of the Economic and Social Commission for Asia and the Pacific (ESCAP).

BANGKOK, Thailand, Mar 31 2017 (IPS) - With just over a year since the adoption of a historic blueprint to end poverty and protect the planet, positive signs have already started to emerge among countries in the Asia-Pacific region as they push ahead with the implementation of the 17 Sustainable Development Goals (SDGs). 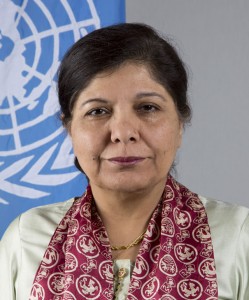 It is encouraging to note that most countries in the region have made serious attempts to domesticate the landmark global action-plan by developing national sustainable development strategies– a first and crucial step if we are to fully realize the ambitious targets set out in the landmark agreement.

Steady economic growth over the past year has seen a decline in poverty and an improvement in the quality of life. A bright spot worth highlighting is the progress on gender equality. Gender parity has been achieved in primary education, and maternal mortality rates have been brought down across the region with the exception of certain pockets. For example, maternal mortality dropped by 64 per cent in South Asia from 1990 to 2015 and by 57 per cent in the Pacific over the same period.

Notwithstanding these incremental gains, a number of outstanding challenges remain which if not effectively addressed may scuttle our collective efforts.

A joint study undertaken by the United Nations Economic and Social Commission for Asia and the Pacific (ESCAP), the Asian Development Bank (ADB), and the UN Development Programme (UNDP) reveals that some 400 million people in Asia and the Pacific continue to live in extreme income poverty and more than one in four people experience poverty in multiple dimensions that impact their health, education, and standard of living. South Asia is the worst affected with 15 per cent of the population living in extreme poverty, and 86 per cent residing in rural areas where income diversification opportunities are limited and challenges of poor natural resource management persist. Of equal concern is the rise in income inequality within countries. The challenge is to ensure that prosperity is felt by all, and not just a fortunate few.

With 12 per cent of the population, or 490 million people, still undernourished in our region, ending hunger and poverty will heavily depend on introducing sustainable food production systems and more resilient agricultural practices. Despite reductions in infant mortality rates, children in low income countries are still nearly nine times more likely to die before reaching the age of one than those in high income countries.

Enhancing the health of citizens will also require expansion of coverage of health services in many countries. This means increasing government spending on health, as per capita government spending is as low as $4 per person in low income economies of our region.

Despite progress in gender equality and women’s empowerment made in Asia and the Pacific on several fronts, significant gaps still remain. Women continue to be paid less and are more likely to find themselves in vulnerable employment with low wages, no formal contracts or labour rights and minimal social protection. In 2015, the gender pay gap in the region as a whole reached an astounding 20 per cent.

As a whole, the region has also experienced declining biodiversity levels – a major source of distress for Pacific island economies – where the value of fish caught in the territorial waters of some small island developing States is worth up to three times their GDP. Future risks to ocean resources are further underscored by the fact that 40 per cent of our oceans are heavily affected by unsustainable practices.

Finally, the Asia-Pacific region faces a high infrastructure deficit. At the same time, demand pressures will grow as the urban population will swell by 50 million each year, aggravating congestion, air pollution and waste management.

Needless to say, these challenges must be urgently addressed. Strong continued leadership, knowledge sharing and UN system collaboration, are pivotal tools that will move us all closer to realizing the aspirations set out by the 2030 Agenda. The dynamism and development track record of our region lends us hope that we can achieve balanced economic, social and environmental development by pursuing the right blend of rebalancing to revive domestic and regional demand.

ESCAP remains committed to strengthening the capacity of countries, so that they can embrace integrated strategies to confront the multidimensional facets of poverty, and promote the opportunity for prosperity for all.

This week ESCAP held the Asia Pacific Forum on Sustainable Development (APFSD 2017) in Bangkok from 28-31 March, which brought together senior representatives from across the region to define a road map that will support member States’ implementation of the 2030 Agenda over the next 15 years.

We are all working to come up with concrete measures that will enhance the region’s achievement of the SDGs to deal with multidimensional poverty, which when considered raises the level of the vulnerable population in Asia and the Pacific region to 900 million. Forums like these are key to marshalling the international support required to achieve this ambitious agenda. Progressing the SDGs in Asia and the Pacific is central to achieving the global 2030 Agenda. We have the opportunity for action now.