Margot Wallström, is Minister for Foreign Affairs of Sweden 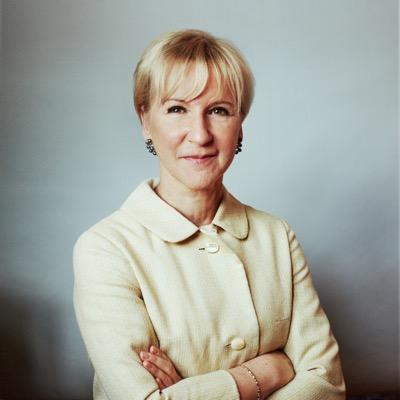 STOCKHOLM, Mar 7 2017 (IPS) - Lately, the world has tended to present itself in increasingly darker shades. In many places, democracy is questioned, women’s rights are threatened, and the multilateral system that has taken decades to build is undermined.

No society is immune from backlashes, especially not in relation to gender. There is a continuous need for vigilance and for continuously pushing for women’s and girls’ full enjoyment of human rights.

That is why I – when I assumed office as Foreign Minister over two years ago – announced that Sweden would pursue a feminist foreign policy. Today, this policy is more needed than ever.

The world is torn by conflicts that are perhaps more complex and more difficult to solve than ever before. Almost half of all conflicts reoccur within five years. Over 1.5 billion people live in fragile states and conflict zones.

In order to respond to these global challenges, we need to connect the dots and see what drives peace. We need to change our policies from reactive to proactive, focusing on preventing rather than responding. And prevention can never be successful without the full picture of how certain situations affect men, women, boys and girls differently. Applying gender analysis, strengthening the collection of gender disaggregated data, improving accountability and bringing women into peace negotiations and peacebuilding will be key in moving forward.

Feminism is a component of a modern view on global politics, not an idealistic departure from it. It is about smart policy which includes whole populations, uses all potential and leaves no one behind. Change is possible, necessary and long overdue
Studies show that conflict analyses that include gender aspects and women’s experiences are more efficient. Rise in sexual and gender based violence can for example be an early indicator of conflict. We also need to take into account the studies that show a correlation between gender equal societies and peace.

Gender equality is a fundamental matter of human rights, democracy and social justice. But overwhelming evidence shows that it is also a precondition for sustainable growth, welfare, peace and security. Increasing gender equality has positive effects on food security, extremism, health, education and numerous other key global concerns.

With Sweden’s feminist foreign policy, we bring all our foreign policy tools into play for gender equality and apply a systematic gender perspective in everything we do. It is an analytical tool for making informed decisions.

The feminist foreign policy is an agenda for change which aims to increase the rights, representation and resources of all women and girls, based on the reality where they live.

Representation is at the core of the policy, since it is such a powerful vehicle for both the enjoyment of rights and access to resources. Whether it regards foreign or domestic policy, whether in Sweden or any other place in the world, we see that women are still under-represented in influential positions in all areas of society. Non-representative decision-making is more likely to yield discriminatory and suboptimal outcomes. Put women at the table from the start and you will notice that more issues and perspectives are brought to light.

Despite facing discouraging times for world politics, it is important to remember that change is possible. Sweden’s feminist foreign policy makes a tangible difference. Every day, embassies, agencies and departments implement context- and knowledge-based policy around the world. And more countries are realising that gender equality simply makes sense.

To mention some examples of how we work, Sweden has provided extensive support for the involvement of women in the Colombian peace process, ensuring that significant perspectives were lifted in the peace agreement. We have also established a Swedish network of women peace mediators, co-established a Nordic equivalent and reached out to other countries and regions to encourage them to form their own networks.

Together with the ICC and partner countries, we counter impunity for sexual and gender based violence in conflicts. We also make sure that humanitarian actors only receive funding if their work is based on gender disaggregated data. Governmental guidelines have been given to the Swedish International Development Cooperation Agency, contributing to making gender equality the main objective in an increasing amount of Sida’s specific sector issues.

These are just some examples of how our feminist foreign policy translates into practice, making a difference for women and girls around the world.

Feminism is a component of a modern view on global politics, not an idealistic departure from it. It is about smart policy which includes whole populations, uses all potential and leaves no one behind. Change is possible, necessary and long overdue.