‘Words of Fear and Loathing Can -and Do- Have Real Consequences’ 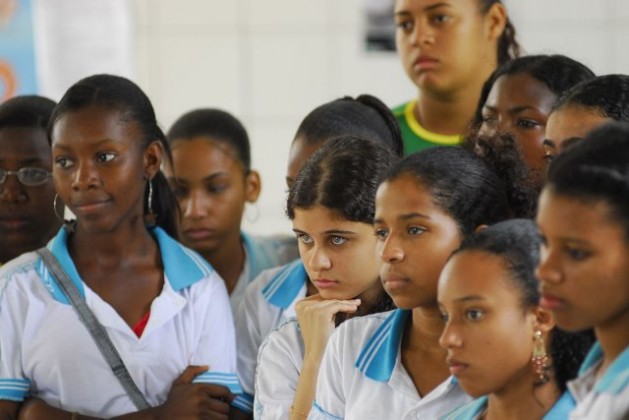 Students watch a performance by their peers at Barros Barreto School, in Salvador, Brazil. The performance tackled social issues such as racism and gender discrimination. Credit: UNICEF/Claudio Versiani

ROME, Mar 21 2017 (IPS) - “Politics of division and the rhetoric of intolerance are targeting racial, ethnic, linguistic and religious minorities, and migrants and refugees. Words of fear and loathing can, and do, have real consequences,” warns the UN High Commissioner for Human Rights

The UN rights chief, Zeid Ra’ad Al Hussein, said on the occasion of the International Day for the Elimination of Racial Discrimination on 21 March that Governments around the world that they have a legal obligation to stop hate speech and hate crimes, and called on people everywhere to “stand up for someone’s rights.”

The theme for the Day this year is ending racial profiling and incitement to hatred, including as it relates to people’s attitudes and actions towards migration.

At the Summit for Refugees and Migrants in September 2016, UN member states adopted a Declaration strongly condemning acts and manifestations of racism, racial discrimination, xenophobia and related intolerance.

The Summit also sparked the UN’s Together initiative to change negative perceptions and attitudes aimed at refugees and migrants.

Zeid said that States do not have any excuse to allow racism and xenophobia to fester.

States “have the legal obligation to prohibit and eliminate racial discrimination, to guarantee the right of everyone, no matter their race, colour, national or ethnic origin, to equality before the law,” the senior UN official said.

He urged governments to adopt legislation expressly prohibiting racist hate speech, including the dissemination of ideas based on racial superiority or hatred, incitement to racial discrimination, and threats or incitement to violence.

“It is not an attack on free speech or the silencing of controversial ideas or criticism, but a recognition that the right to freedom of expression carries with it special duties and responsibilities,” Zeid said.

To promote human rights, the UN High Commissioner’s office, known by its acronym OHCHR, is asking people around the world to , “Stand up for Someone’s Rights Today”.

The campaign urges people to take practical steps in their own communities to take a stand for humanity.

For his part, UN secretary general António Guterres had on 27 February said that “disregard for human rights is a disease, and it is a disease that is spreading – North, South, East and West.”

Addressing the Geneva-based UN Human Rights Council http://www.ohchr.org, he urged member states to uphold the rights of all people in the face of rising populism and extremism.

Having lived under the dictatorship of Portugal’s António de Oliveira Salazar, Guterres explained that he was 24 before he knew democracy. Denying his compatriots their human rights had oppressed and impoverished many of them, resulting in a mass exodus, and also brought bloody civil wars to Portugal’s former colonies in Africa.

He highlighted the importance of the Universal Declaration of Human Rights and the treaties that derive from it, and urged the Council to be “fully engaged” on the issues that require their attention.

“We are increasingly seeing the perverse phenomenon of populism and extremism feeding off each other in a frenzy of growing racism, xenophobia, anti-Semitism, anti-Muslim hatred and other forms of intolerance,” said Guterres.

“Minorities, indigenous communities and others face discriminations and abuse across the world,” he added, noting abuse targeting refugees and migrants, and people who are lesbian, gay, bisexual, trans and/or intersex.

Among other issues raised, Guterres also called for protection of the human rights defenders and of journalists who are “essential” to the checks and balances of any society.

In his address, UN High Commissioner Zeid denounced “reckless political profiteers” who threaten the multilateral system or intend to withdraw from parts of it.

“We have much to lose, so much to protect,” the UN High Commissioner said.

“Without a commitment to fundamental human rights, to the dignity and worth of the human person and to the equal rights of men and women and of nations large and small, our world will become chaos, misery and warfare,” he warned.

“Of all the great post-war achievements, it is this assertion of the universality of rights in human rights law that may be the most noteworthy.”

Speaking directly to the political actors, Zeid said “the sirens of historical experience ought to ring clear” and pledged that “we will not sit idly by” in the face of violations.

“Our rights, the rights of others, the very future of our planet cannot, must not be thrown aside by these reckless political profiteers,” he added.