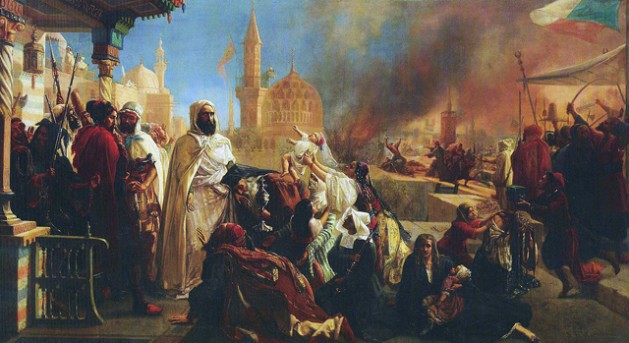 ROME / OXFORD, UK, Feb 15 2017 (IPS) - As far back as the 1830s, Algerian Emir Abd el Qader el Jazairy was known for having introduced, among others, rules concerning the humane treatment of prisoners, which developed in 1842 into his Code for the Protection of Prisoners.

“The Emir’s Code prohibited mistreatment of prisoners and the killing of unarmed enemy soldiers or prisoners. In the Emir’s jails, there were no ‘enemy combatants’ prevented from enjoying basic human rights,” explained Idriss Jazairy, the executive director of the Geneva Centre for Human Rights Advancement and Global Dialogue.

“Henri Dunant, the great Swiss humanitarian activist is credited with having introduced the first code to protect war prisoners that led to the creation of the Red Cross. That was in 1863, some twenty years after the adoption of the Emir’s Code,” he added.

The executive director of the Geneva Centre made this statement during an event held on Feb. 15 on the historical importance of the 19th century Algerian leader, Emir Abd el Qader, and the universality of Islamic values, at the renowned Oxford Centre for Islamic Studies of Oxford University.

Jazairy also spoke about the Emir’s contribution to identify commonalities between Islam and Christianity in order to promote peace, social justice and inter-religious harmony between Muslims and Christians.

“He asserted in a letter of July 1862 to a French bishop, Mgr. Pavy, that the teachings of both of these faiths were the same and could be encapsulated in two principles: the worship of God and compassion towards His creatures. Our religions, he averred, only differ in the prescriptions provided as to how best to comply with these cardinal principles.

“This brings the Emir to the conclusion in his book ‘Reminder to the Thoughtful and Notice to the Oblivious’ that religions are complementary and all lead to tolerance,” Jazairy said.

During his presentation, he also referred to the example of the Emir’s action to save the Christian minority in Damascus, during civil strife in 1860 that was widely commended by world leaders at that time.

The Emir’s decision to provide protection to religious minorities reflect the Emir’s dedication to upholding what he called “the rights of humanity” an expression that preceded, and anticipated, the adoption of the Universal Declaration of Human Rights 85 years later.

The executive director of the Geneva Centre also expressed his concerns that the world press, by calling the authors of terrorist action “Jihadis”, unwittingly provide religious legitimacy for their heinous crimes and accredit the idea that Islam inspires terrorism.

He argued that this was tantamount to “Islamising crime rather than denouncing the criminalisation of Islam.”

“This provides terrorist groups with recruitment publicity while stimulating in credulous people’s minds, both in the Middle East and in the West, a conflation of Islam with terrorism,” the executive director of the Geneva Centre warned.

By this standard, the Emir Abd el Qader el Jazairy is very much alive today with city squares and streets across the world bearing his name and with even a city in the U.S. state of Iowa named after him, he explained.

Not a single year has elapsed in recent times without new books and innumerable articles being published about this towering international figure, said Jazairy.

“The Emir was honoured by no lesser world leaders of his time than Abraham Lincoln, Queen Victoria, Tsar Alexander II, Sultan Abdelmajid I and of course Napoleon III. Praised also was he by no lesser writers and poets than Rimbaud and Voltaire, Browning and Thackeray.”

The Emir is known to have fought the French invaders of Algeria for 17 years from 1830 to 1847. He waged 116 battles and confronted, at times defeating them, five princes of the French Royal Household, ten field-marshals and 150 generals, Jazairy reminded.

“Despite the fact that the French army outnumbered 10 to 1 the troops of the Emir, despite the former’s resort to weapons of mass destruction of the times, the almighty mobile cannon, the French conquest was slow, even laborious. Its vagaries called for the replacement of the Minister of War in France 16 times during this period.”

He noted that Algeria has a long history of resisting foreign invasion and occupation. Jugurtha, born in 160 BC, for instance, a courageous leader of Algeria, resisted the Roman invasion for seven years.

“Algeria’s liberation war (1954-1962) also lasted seven years. In December 1847, the fighting officially ended leading to what Algerians refer to as a treaty to end hostilities. The French called it, not ingenuously, a surrender.”

By this treaty the French committed inter alia to the transfer of the Emir, his family and followers to Alexandria or Acre. However, the treaty was shamefully violated by France, Jazairy noted.

The Geneva Centre for Human Rights Advancement and Global Dialogue is a think-thank dedicated to the promotion of human rights through cross-cultural, political, religious and civilizational dialogue, and through training of the upcoming generations of stakeholders in the Arab region.

The Centre works towards a value-driven human rights system, challenging politicisation and building bridges between different narratives thereon of the Global North and of the Global South.