UNITED NATIONS, Apr 11 2017 (IPS) - The Group of 77 is calling for the creation of a new and dedicated Trust Fund for the implementation of the UN’s strategic plan on forests for the period 2017-2030. 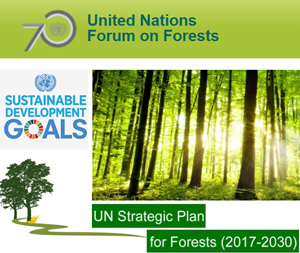 The proposed Trust Fund is expected to be under the management of the Global Forest Financing Facilitation Network (GFFFN).

Speaking on behalf of the Group of 77, joined by China, Santiago Garcia, Director of the National Forestry Office in Ecuador told a Working Group meeting he believes that without such a Fund, the implementation of the Strategic Plan on Forests “is difficult for developing countries”.

“As we come together to this Working Group Meeting, let me stress that Forests are crucial for sustainable, inclusive and sustained economic growth of developing countries,” he said.

Forests are also central to sustained poverty reduction and is related to practically all aspects of the 2030 Agenda for Sustainable Development and crucial for access to water, rural development, agricultural productivity, conservation of biodiversity, energy, soil conservation, and flood control.

“They provide habitat for at least 80% of terrestrial biodiversity and are also a major carbon sink for regulating global climate,” he added.

The Group believes that the United Nations strategic plan on forests for the period 2017-2030 should be action-oriented, and strengthened to deliver a real impact on the ground, catalyze the implementation and facilitate the mobilization of increased and predictable financing to adequately carry out sustainable forest management at all levels.

And it should also restate the commitments regarding financing in the 2030 Agenda for Sustainable Development, Garcia said.

He also reiterated that the adequate and timely implementation of the United Nations strategic plan on forests for the period 2017-2030 is fundamental for developing countries.

“In this regard we express our concern on approaches delivered in this venue regarding the important issue of financing which needs to recognize major gaps on financing issues.”

He said it is important to strengthen the UNFF Global Forest Financing Facilitation Network (GFFFN) and foster and capitalize existing, new and emerging financing opportunities.

These opportunities include capacity building– given constrained abilities by several developing countries to apply to or implement international cooperation for forest-related programs—and facilitating mechanisms for developing countries to access funds and disseminate best practices on Sustainable Forest Management while ensuring the full implementation of the Forest instrument and achieving the goals and targets comprised in this proposal.

The Group took note of the proposal by the Co-chairs to explore further available data on official development assistance (ODA). However the Group is committed to include a reference on increasing of funding from all sources, including an increase in ODA.

“We highlight the voluntarily nature of the Strategic Plan proposed and that the provision of means of implementation should also encompass technology transfer to developing countries on favorable terms and capacity building for developing countries.”

In this regard, he said “we also should avoid increasing the burden of reporting or creating overlaps in the process of communication through streamlined reporting on the implementation of the Forest Instrument, the Strategic Plan and voluntary planned contributions”.

“We should agree on a communication strategy that addresses those issues, especially by reassuring a transparent process on the issue of reports. The Group also believes that the term voluntary planned contributions could be replaced by “national voluntary contributions”.

The Group expressed its general agreement on the co-chair’s proposal for the six Global Forest Goals. The group also recognized certain overlapping among the targets.

“In this regard we believe that numerical targets should be based on clear forest-related definitions and baseline,” he declared.