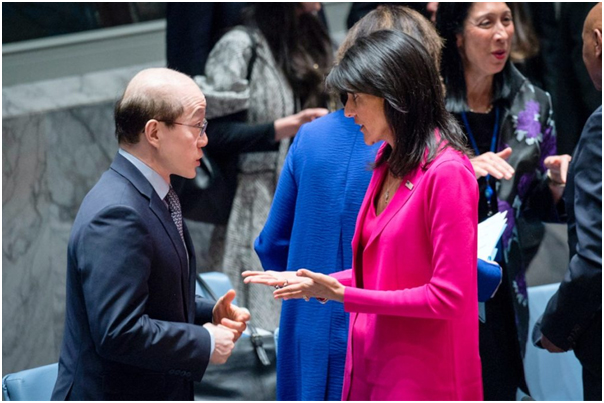 UNITED NATIONS, Apr 19 2017 (IPS) - Nikki Haley, the United States ambassador to the United Nations, presided over what she was determined to sell as “an historic meeting exclusively on human rights” in the UN Security Council. But her brief speech in the April 18 meeting fell far short of introducing innovations to confront violations of human rights or prevent them in such places as Syria, Burundi and Myanmar.

“If this Council fails to take human rights violations and abuses seriously, they can escalate into real threats to international peace and security,” Haley began. “The Security Council cannot continue to be silent when we see widespread violations of human rights.

“Why would we tell ourselves that we will only deal with questions of peace and security, without addressing the factors that bring about the threats in the first place?”

The debate, ponderously titled “Maintenance of international peace and security: human rights and prevention of armed conflict,” gave an “opportunity to reflect on the way the Security Council directly addresses human rights issues in its work,” according to a concept note from the US mission to the UN.

The afternoon meeting among the Council’s 15 permanent and elected members turned political in no time. Ukraine referred to a “human-rights phobia” in the UN and blasted away at Russia’s annexation of Crimea; Uruguay said it was the responsibility of governments to protect its citizens’ human rights as well as people “in transit.” A low-level Russian diplomat rejected the whole notion of the Council concentrating on human rights in its forum.

Yet what shone through the two-hour meeting was not Haley’s remarks but the consistent messages of other Council members, who commended the UN Human Rights Council and the UN High Commissioner for Human Rights as indispensable partners with the Security Council. France, for example, said it was very “attached” to the Human Rights Council. Britain was effusive.

“Two institutions of the United Nations are particularly vital to delivering this joined up approach to human rights,” said Matthew Rycroft, the British ambassador to the UN. “First, the High Commissioner for Human Rights and his Office provide invaluable support to UN peace operations.” Second, he added, is the Human Rights Council.

Rights experts had hinted that Haley’s session on human rights was an attempt to undermine the UN Human Rights Council, which is based in Geneva. She has pointed to the Council as “corrupt” and said she planned to visit it in June to whip it into shape.

António Guterres, the UN secretary-general, reinforced the primary role of the UN human-rights monitoring bodies. He said that “close cooperation between the Office of the United Nations High Commissioner for Human Rights and all relevant United Nations bodies, including the Security Council, enhances general awareness of potential crisis situations, and our collective ability to address them.”

Guterres described the Security Council’s own “decisive action” on human rights, citing the establishment of the international criminal tribunals for Rwanda, the former Yugoslavia and elsewhere as well as the Council’s referral of atrocity cases to the International Criminal Court in The Hague.

As a matter of course, human-rights abuses are raised often by Council members as an early warning — or “prevention” — method.

As if stuck on a sales pitch, the US emphasized in the weeks before the meeting that it was holding the first exclusive session in the Council on human rights. But that is debatable, say some rights experts, since the topic has been written specifically into 15 peacekeeping mission mandates, sanctions, investigations, resolutions, special-envoy responsibilities and other matters relevant to the Council.

Even Haley acknowledged these tools of the Council, admitting their relevance and value.

Haley’s office fudged how well the Council accepted the purpose of the debate, saying that “through negotiations the United States convinced all 15 Council members to agree to put the meeting on the POW” – program of work. But the meeting was technically positioned under the international peace and security umbrella and not listed as an agenda item, a threshold that some council members refused to cross.

The US concept note for the meeting posed five questions to Council members to consider when they came to the session, as if they were being asked to write a high-school essay. The first question read, “What types of measures should the Security Council take to respond to serious human rights violations and abuses?” (The US did not appear to answer that.)

Kenneth Roth, the executive director of Human Rights Watch, tweeted in the lead-up to the meeting, is the “human rights discussion serious?” He added: “Are particular countries named? Do they include allies?”

In the Council’s early decades, human rights rarely crept into its deliberations because of Article 2, paragraph 7 of the UN Charter, which said, “Nothing contained in the present Charter shall authorize the United Nations to intervene in matters which are essentially within the domestic jurisdiction of any state. . . . ”

Sensitive political realities kept the topic from going too deep when it did arise, according to “The Procedure of the UN Security Council,” a reference book by Loraine Sievers and Sam Daws. When a Council member wanted to raise a human-rights issue in a certain country — not unusual throughout the Cold War — ambassadors needed to show that the abuses could ripple outside the country.

Famously, the topic of Myanmar (Burma) was brought up in 2006 when the US representative and other Council members voiced concerns over the deteriorating situation in that country. They noted that Myanmar’s outflow of refugees and illegal drugs as well as contagious diseases could destabilize the region, the Sievers-Daws book said. But China objected to putting Myanmar on the Council’s agenda, denying its problems presented an international threat.

Nevertheless, the Council has not avoided taking on high-profile rights-abuse cases. The rise in abuses in Burundi last year prompted the Council to call on the government to cooperate with UN human-rights monitors — or else. And a UN commission of inquiry on North Korea declared the regime responsible for crimes against humanity, with the Council elevating the matter to its regular agenda.

In Burundi, the UN’s top human-rights official, Zeid Ra’ad al-Hussein, said on April 18 that he was alarmed by what appeared to be a “widespread pattern” of rallies in Burundi in which members of a pro-government youth militia chant a call to “impregnate” or kill opponents. Burundi has been seized on and off by violence since its president, Pierre Nkurunziza, won a disputed third term in 2015.