Mike Warmington is a microfinance partnerships director with One Acre Fund, a nonprofit social enterprise that works with more than 445,000 smallholder farmers in Sub-Saharan Africa to eradicate hunger and poverty. 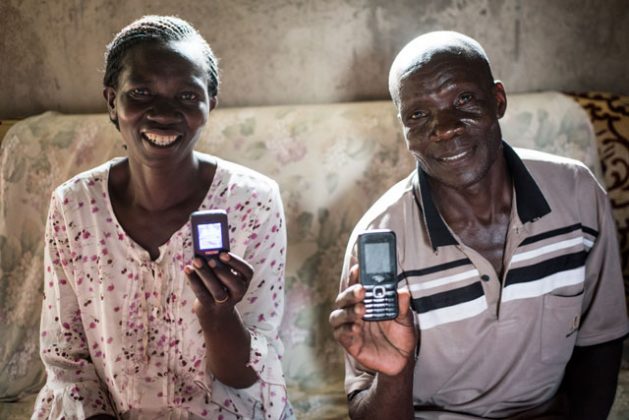 Mathew Khaemba and his wife Everline Wakhungu with their mobile phones.

KAKAMEGA, Kenya, Jun 14 2017 (IPS) - Mathew Khaemba, a smallholder farmer in western Kenya, remembers a time when his children were failing in school because they were too hungry to concentrate on their lessons.

In those years, Mathew never harvested enough crops to support his wife and six children – often they would eat just one meal a day to ration food. Mathew says his crops were always small because he couldn’t afford fertilizer or good-quality seeds. He lives miles away from the nearest urban area, and there was no one around to offer him a loan to buy the inputs he desperately needed.

When Mathew joined One Acre Fund seven years ago, he was at his wits end. My organization, a nonprofit working with more than 445,000 smallholders in sub-Saharan Africa, offers farmers seeds and fertilizer on credit and provides training on improved farming techniques. Within a season after enrolling, Mathew’s harvest nearly tripled. Now, he has no trouble feeding his family, and his children are doing much better in school.

Access to credit can be life altering for smallholders like Mathew, but for more than 450 million farming families around the world, it remains painfully out of reach. The financing gap is huge – the Rural and Agricultural Finance (RAF) Learning Lab estimates that there is $200 billion of demand for credit from smallholders that the financial services industry is failing to meet worldwide. In fact, smallholder finance represents the greatest opportunity for scale and impact in the financial inclusion sector today.

One of the major roadblocks to lending is that many farmers live in remote rural areas, and they operate in cash-based economies without access to modern banking. Traditional microfinance institutions and banks face high cost barriers against working in the rural sector, but that doesn’t mean lending to farmers can’t be done. My organization has found success in lowering costs and addressing other challenges associated with smallholder lending by using one innovative new tool – mobile phones.

Digitization in Kenya has been surprisingly swift – and mobile phones have become almost as ubiquitous in rural areas as livestock. Last year, One Acre Fund, in partnership with Citi Inclusive Finance, introduced a new mobile repayment system to about 200,000 farmer clients in Kenya. Now, instead of handling millions of small cash transactions – which were often subject to miscounting, delays, and even fraud – the organization receives electronic transfers directly from clients. Farmers receive text messages confirming that their payments have arrived, creating peace of mind and allowing them to better manage their household finances.

The United Nations-based Better Than Cash Alliance just released a new case study about our work to increase financial inclusion for smallholders through this new digital payments system. For Mathew and thousands of farmers like him, the benefits of making the switch to digital are clear.

“Mobile money is efficient because I can do the transaction myself, and not have to give cash to someone else,” Mathew recently told us. “Before it was not as trustworthy. Now it is easy.”

Reducing the costs and risks associated with reaching smallholder farmers is critical for enabling more financial practitioners to be able to serve them. In One Acre Fund’s case, we saw an 80 percent reduction in the costs of revenue collection and reconciliation after introducing the mobile money system. Digitization isn’t the only solution, however.

There are many innovative ways that service providers could do more to better meet the giant financing need – either directly, or through partnerships. Trainings that address farmer capacity, creating access to quality inputs, or improving post-harvest storage and marketing are all crucial services that both reduce credit risk and increase farmer impact

Whatever method is used, the opportunities are huge for both financiers and farmers alike. Access to credit enabled Mathew to improve his family’s situation almost immediately. Over the years, he’s continued to invest in his farm and his children’s educations. He’s also used his extra income to make improvements on his house and buy livestock.

“It not only changed my life, but the lives of my children too,” he says.