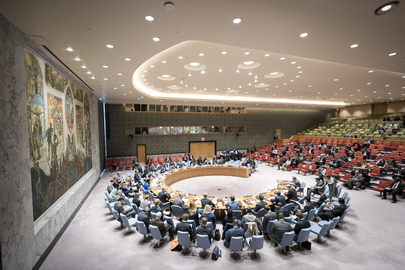 A wide view of the Security Council meeting on the Situation in Libya. Credit: UN Photo/Rick Bajornas

UNITED NATIONS, Jul 6 2017 (IPS) - The failure of European Union (EU) to buckle up safety for migrants and refugees reaching its shore has been condemned by Amnesty International in a report today.

The most notorious instances in the seas of the Mediterranean plummeted with stricter actions from the EU in the wake of dooming deaths in 2015. The image of a three year old Syrian boy, who was found dead off the shores of Turkey, shook the world to pay more attention to the plight of refugees fleeing war.

Two years on, efforts to ensure the safety of migrants and refugees have once again dropped off the radar of EU.

In the first half of the year alone, 2000 refugees died in the Mediterranean sea, three times the numbers from 2015.

Smugglers off the coast of Libya, for instance, often hurl refugees onto inflatable rubber boats that are inadequately equipped, or have insufficient fuel.

Migrants in large numbers arrive in Libya to ultimately make their way across the sea to Italy. This year alone, 73,000 refugees reached Italy.

The EU, disconcerted by its own fragmentation of agenda in the region, has largely neglected the safety of persons crossing the high seas. Instead, the European bloc has focussed on policies to disrupt smugglers and stall the departure of boats all together.

This strain of policy—strengthening Libyan coastguards and keeping boats at bay—to rein in the numbers from capsizing boats has largely failed.

This is why, ministers from the EU met today in Tallin to commit to better cooperation with NGOs to navigate the deadly waters of this route, a senior campaigner at Amnesty International, told IPS News.

The only way to ensure safety for migrants and refugees is offering safe and alternative routes as well as breaking up smuggling operations off the coast of Libya, a country already marred with instances of human rights abuse.

“European states have progressively turned their backs on a search and rescue strategy that was reducing mortality at sea in favour of one that has seen thousands drown and left desperate men, women and children trapped in Libya, exposed to horrific abuses,” said John Dalhuisen, director of Amnesty International in Europe.

The senior campaign manager, in an email to IPS news, called upon the international community’s help to end the strongmanship of Libyan coastguards, and for compliance with the Refugee Convention of 1951.