Educating Children One Radio Wave at a Time 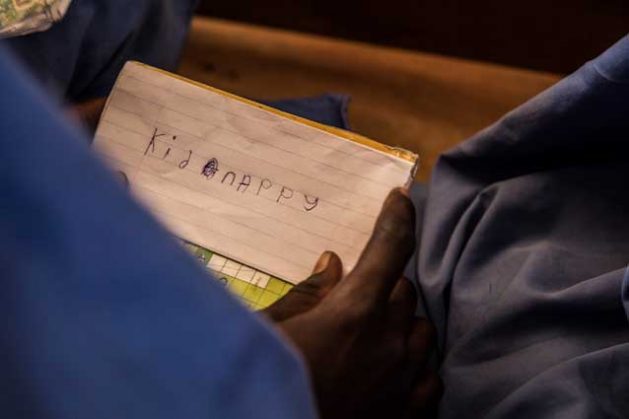 'Kidnappy' is one of the fears that Nigerian children shared as part of UNICEF's Education in Emergencies exercise. Thousands of young girls have been kidnapped and held for year by Boko Haram since the start of the insurgency in 2009. Credit: UNICEF

UNITED NATIONS, Jul 19 2017 (IPS) - Nigeria’s conflict has displaced more than a million children, leaving them without access to education. However, an innovative radio program aims to transform this bleak scenario.

Concerned by the ongoing insecurity and its impacts, the UN’s children agency (UNICEF) created a radio program to help educate displaced children in the Lake Chad region.

“Boko Haram has disrupted the lives of 1.3 million children with a radical insurgency that has burned villages, displaced people, and created a culture of fear,” said UNICEF’s Crisis Communications Specialist Patrick Rose.

Now entering its eight year, Boko Haram’s violent insurgency has intensified and spilled over in the Lake Chad region, displacing over 2 million people across four countries.

The group has particularly targeted education, destroying more than 900 schools and forcing at least 1,500 more to close.

According to Human Rights Watch, at least 611 teachers have been killed and another 19,000 forced to flee. Boko Haram has also attacked students to keep them out of school and forcibly recruited students into its ranks.

Such targeted attacks and destruction have created an education gap in crisis-affected areas, especially where displaced communities have fled to.

“Short of going through and building new schools in all of those communities when we don’t know how long this conflict is going to last, we tried to develop ways that we could reach these children and deliver some sort of educational routine that will keep them at least learning,” Rose told IPS.

Created with support from the European Union (EU) and in partnership with the governments of Cameroon and Niger, UNICEF’s radio education programs serve as an alternative platform for the 200,000 children in the two countries unable to access schools.

It includes 144 episodes of educational programming on literacy and numeracy for various ages and will be broadcast through state channels in both French and the local languages of Kanouri, Fulfulde, and Hausa.

The curriculum also includes a child protection component such as psychosocial support, guiding teachers to create a space for children to share their experiences and learn how to manage their fears.

“When you have children who have been deeply disturbed by displacement, many of whom have witnessed the murders of their own families, and you create a situation in which they are expected to spend eight hours a day in a classroom that isn’t engaging at all with the reality that they are encountering outside, you get a fundamental dissonance and ultimately low engagement,” Rose said.

As part of its Education in Emergencies initiatives, UNICEF works closely with communities to identify the risks they face as individuals and schools as a whole.

In one such workshop about fears, one girl wrote “kidnappy,” reflecting the deep distress and risk of kidnapping that young girls face.

Not only does the radio program have the potential to decrease the likelihood of kidnapping as children listen from home, but it also creates a “positive” space that addresses children’s realities.

Discussions are underway with the governments of Cameroon and Niger to make radio courses certified, allowing children to receive a certification and pass the school year.

Rose called the approach to the complex crisis “unique,” as it moves from a focus on individual countries to a multi-country response.

He also highlighted the potential for the radio education program to be replicated in other regions of the world.

In 35 crisis-affected countries, humanitarian emergencies and protracted crises have disrupted the education of 75 million children between the ages of 3 and 18.

“In the same way that radio played a key role in the Cold War and reaching people around the world with messages, it is the same sort of situation here—radio doesn’t respect the borders of conflicts,” Rose concluded.

UNICEF has so far received 50 percent of a 38.5-million-dollar appeal to meet the education needs of children in the region.