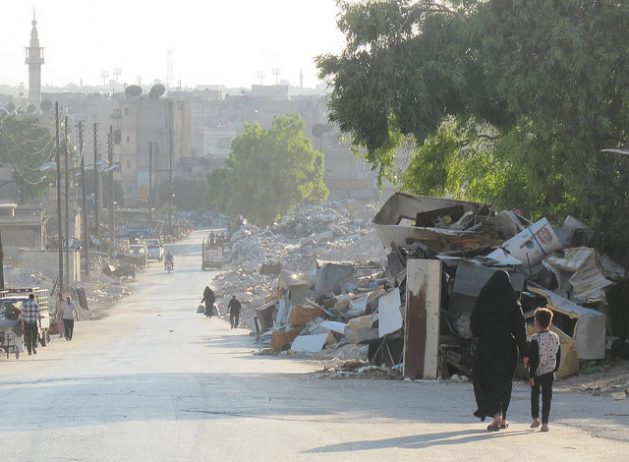 What remains of a street in Aleppo. Credit: IPS

UNITED NATIONS, Jul 6 2017 (IPS) - A former French judge has been appointed as the head of an independent team tasked with investigating war crimes in Syria.

Catherine Marchi-Uhel was appointed by Secretary-General Antonio Guterres to lead a panel known as the International, Impartial and Independent Mechanism which aims to gather, preserve, and analyze potential evidence of serious violations of international law committed in Syria since 2011 for use by courts or an international tribunal.

The legal team, established in Geneva, was created by the UN General Assembly in December 2015 after facing longstanding resistance from Russia which has used its veto power eight times in the Security Council to block investigations and action on the conflict.

Marchi-Uhel is the first head of the panel and has extensive experience in international criminal law, previously serving as an international judge with the UN mission in Kosovo and in Cambodian courts prosecuting leaders of the Khmer Rouge. She was the Head of Chambers at the International Tribunal for the former Yugoslavia and worked in various legal positions at the French Ministry of Foreign Affairs and with UN peacekeeping missions.

Most recently, Marchi-Uhel has been serving as the ombudsperson for the Security Council committee monitoring sanctions against the Islamic State of Iraq and the Levant (ISIL) and al-Qaeda.

Many applauded the move, including Human Rights Watch who noted that the team is “critical” for the “long march to justice,” stating: “For victims who have known nothing but suffering, despair, and abandonment, the creation of this team represents a small step in the difficult struggle for justice, redress and an end to impunity that has marked the bloody conflict.”

A UN International Commission of Inquiry has comprehensively documented atrocities committed by all parties to the conflict, including systematic attacks on hospitals and schools.

One of the deadliest attacks in Syria came in October 2016 when a series of airstrikes hit a complex of schools in Haas, killing a total of 36 civilians, 21 of whom were children between the ages of 7 and 17. Another 114 people were injured in the attack including 61 children. Afraid of future attacks, the school was closed.

“A Syrian Air Force attack on a complex of schools in Haas (Idlib), amounting to war crimes, is a painful reminder that instead of serving as sanctuaries for children, schools are ruthlessly bombed and children’s lives senselessly robbed from them,” the commission stated.

Such attacks in Syria are estimated to account for half of global attacks on schools from 2011 to 2015.

Several countries have already begun their own investigations into war crimes in Syria including Sweden which prosecuted a former Syrian opposition fighter for war crimes in December 2016.

The International Mechanism headed by Marchi-Uhel is expected to further these efforts around the world.

However, the team, funded by voluntary contributions, has only received half of the $13 million that its work is estimated to cost in its first year with 26 contributing countries as of June.

Netherlands, Germany, Finland, Switzerland, and Qatar are among the group’s top donors.

Regardless, many are hopeful that the team can send an important message to parties of the conflict.

“Their work should help to ensure that the horrendous atrocities committed in Syria over the past six years cannot be swept away with a veto,” said Human Rights Watch.