During its biennial conference held in Rome, Italy from 3-8 July, the Food and Agriculture Organisation (FAO) noted that the world is facing it’s worst food crisis since World War II. 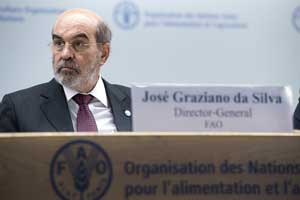 “I wish I could announce here today some good news regarding the global fight against hunger…but, unfortunately, it is not the case,” said FAO’s Director-General Jose Graziano da Silva to member states at the opening of the meeting.

FAO has identified 19 countries facing severe food crises due to a combination of conflict and climate change including South Sudan, Northeast Nigeria, Somalia, and Yemen where nearly 20 million are affected.

Though South Sudan recently declared that it no longer has areas in famine, millions are still on the brink of starvation as violence and insecurity ensues.

In fact, almost 60 percent of hungry people around the world live in areas affected by conflicts and climate change. With no relief to be seen, many turn to migration, contributing to the doubling of global displacement, said Graziano da Silva.

The concerning trends comes just two years after the adoption the internationally agreed Sustainable Development Goals which includes targets to eradicate hunger by 2030.

“Strong political commitment to eradicate hunger is fundamental, but it is not enough. Hunger will only be defeated if countries translate their pledges into concrete action, especially at national and local levels,” said Graziano da Silva.

Though peace is important to end these crises, the international community cannot wait for peace in order to take action, he added.

Italian Prime Minister Paolo Gentiloni similarly called for “renewed and extraordinary efforts” during a keynote address, particularly pointing to the influx of migrants into the European Union (EU) country’s shores.

Italy is one of the major destinations for migrants who embark on dangerous journeys across the Mediterranean sea. In the first six months of 2017, Italy has taken in over 82,000 migrants. In the past week alone, more than 10,000 migrants have been rescued from overcrowded, unstable boats by the country’s coastguard.

Overwhelmed by the numbers, the country has threatened to close their ports to rescue ships unless other EU countries share responsibility and help take in migrants.

However, responding to emergencies alone will not be sufficient.

“To save lives, we have to save their livelihoods. We cannot save people and put them in camps,” said Graziano da Silva.

FAO has highlighted the importance of work around climate change mitigation and adaptation, sustainable agricultural production, migration, and support of conflict-affected rural livelihoods among its key priorities.

Around 1000 participants are expected to attend the 40th session of FAO’s conference, including a 176 member delegation. Participants will address pressing policy issues related to global food security and will review and vote on FAO Director-General’s proposed program of work and budget for 2018-2019.