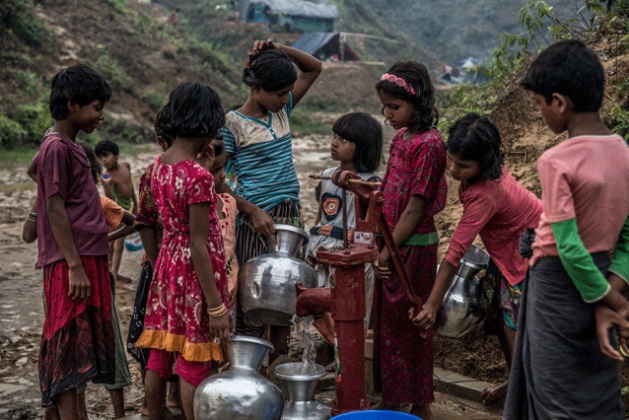 BANGLADESH, Oct 3 2017 (IPS) - Of the nearly half a million Rohingya refugees who’ve fled across the border and have sought refuge in Bangladesh, women and girls are the most at risk, sleeping under open skies, roadsides, and forest areas with little or no protection.

More than two-thirds have no shelter, half have no drinking water, and with the existing camps and host communities underequipped to deal with such a large influx, the ground situation is chaotic and volatile. We at Oxfam are seriously concerned about abuse and exploitation of women and children.

The majority of Rohingya refugees are women and children. Initial assessments suggest that 53% are female, 58% percent are under the age of 18, and 10% are either pregnant or lactating mothers. Many have lost their families, communities, and all their possessions, and after an emotionally and physically grueling journey across the border, they are left with little hope.

They are greeted with overburdened camps and impoverished communities. The already appalling ground conditions have only been made worse by the recent torrential downpours which have also slowed delivery of aid and construction of facilities like wells, toilets, and shelter. There are reports of outbreaks of fevers, respiratory infections, dysentery, and diarrhea.

The scale of the needs is enormous with a majority struggling for life-saving essentials like clean drinking water, food, medical supplies and essential facilities. In early September, the humanitarian partners estimated that 58 million liters of water is needed daily, 1.5 million kilos of rice is needed every month, and that 60,000 shelters, 20,000 toilets, and identifying land for more camps are among the most pressing needs. As the influx grows, so do the needs, and those of women, girls, and young children must be more carefully assessed and elaborated.

As of 25th September 2017, the International Organization for Migration (IOM), identified 180 cases of sexual violence against women and girls. Given the lack of safe spaces and reporting mechanisms, this figure can only be seen as the tip of the iceberg. Further, as William Lacy Swing, the Director General of the UN Migration Agency rightly puts it in his media statement, it is impossible to understand the scale of violence just by the number of reported cases. 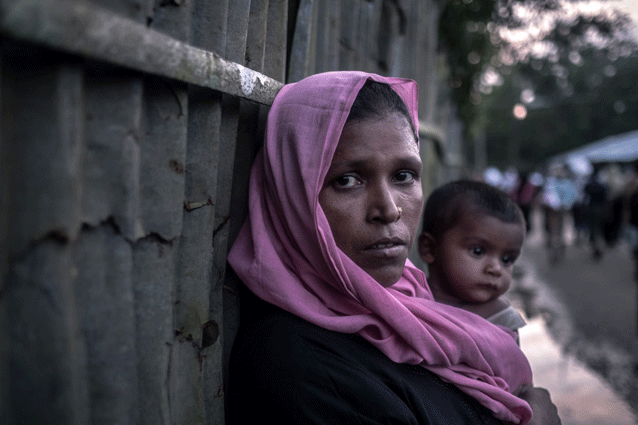 Razida, 35 carries her ten month old son Anisul through Unchiprang Camp in Bangladesh. Razida arrived in Bangladesh 20 days ago after walking for six days with her eight children. She brought nothing with her when she fled Myanmar and had to ask for food from people on the way. Credit: Tommy Trenchard/Oxfam

The forms of violence include, and is not limited to, rape, sexual assault, domestic violence, and emotional abuse. A significant number of teenage girls are married, many are with children and pregnant, which makes the challenge of supporting them even more urgent.

Oxfam has so far supported nearly 140,000 people by providing clean drinking water and emergency food supplies, and by building facilities like tube wells and toilets in camps. Our dignity kits will include hygiene items for women, girls, and children.

We are also supporting local government and partners to design and build camps that are better equipped to meet the needs of the refugee population, especially women and girls. We advocate for adequate facilities to ensure that their safety and wellbeing are protected. For example, separate toilets, bathing areas, social spaces, and well-lit and safe access paths are essential to ensure protection of women and children. When there is a lack of child and women-friendly spaces, the risk of exploitation and violence is much higher.

Prevention of and support to the survivors of sexual and gender-based violence must be increased significantly. We underline the need for psycho-social support for all women, girls, and children, and especially those who’ve survived acts of violence.

We commend the efforts of the Bangladesh government, humanitarian partners, and local communities in providing life-saving assistance for the nearly half a million refugees. However, less than half the funding for the $77 million USD appeal launched by the humanitarian community a month ago has been committed so far.

Since then, the number of refugees has nearly doubled, the influx continues, and the needs of the more vulnerable populations such as women, girls, and children are yet to be fully responded to. Oxfam asks the governments, donors, and individuals to act now so that we can provide life-saving support immediately.