Lourdes Tibig is the climate science advisor of the Institute for Climate and Sustainable Cities (ICSC), a Philippine-based climate and energy policy group and one of the lead authors of the Intergovernmental Panel on Climate Change (IPCC).
Denise Margaret Matias is a researcher at the German Development Institute/Deutsches Institut für Entwicklungspolitik (DIE) 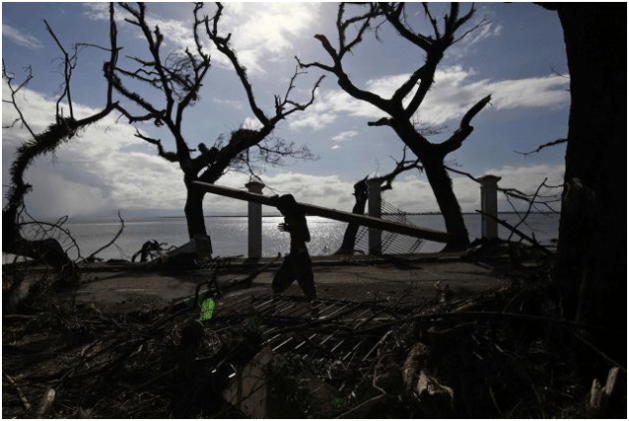 BONN, Germany, Nov 8 2017 (IPS) - November 8 marks the fourth anniversary of Haiyan’s landfall in the Philippines. The super typhoon was the strongest ever to make landfall.

Today, the world continues to be devastated by even more extreme weather events. This year alone saw flooding in Bangladesh, India, Nepal, Vietnam, and the United States; drought in Somalia; Hurricanes Harvey, Irma, and Maria in the Caribbean and the U.S.; and just last week, Storm Herwart in Germany, Czech Republic, and Poland.

Governments must fulfill their commitment to act on climate change on all fronts, even as they continue to ramp up disaster risk reduction and mitigation efforts. They must address loss and damage associated with climate impacts, which are related not just to extreme weather events or rapid onset events but also slow onset events (SOEs).

Slow onset events are a more silent but equal — if not more dangerous and pervasive — threat to lives, livelihoods and ecosystems. These include “sea level rise, increasing temperatures, ocean acidification, glacial retreat and related impacts, salinization, land and forest degradation, loss of biodiversity, and desertification,” as defined by the 2010 climate agreements in Cancun.

This year’s conference is the first to be hosted by a Pacific island nation, Fiji, which is already grappling with sea level rise and was the first country to ratify the Paris Agreement.

However, separate studies by our institutes, the Institute for Climate and Sustainable Cities (ICSC) and the German Development Institute/Deutsches Institut für Entwicklungspolitik (DIE), show the immense gaps in research efforts in the Philippines and other developing countries, which are at the front lines of climate change impacts.

Most of the currently published research on SOEs have been conducted in and focused on North America, Europe, and Australasia. In Asia, only a handful of countries such as Japan, China, India, and Malaysia have done extensive research on SOEs that include attribution and confounding factors.

In the Philippines, surveys by three state universities show that the available literature on climate change in their regions and provinces leave much room for improvement. The lack of data reflects the dearth of investments in the research and development work of state universities and colleges nationwide.

Several confounding factors such as land use change and overexploitation of natural resources also make it difficult to attribute many of the local findings to climate change.

Moreover, most of the SOE research worldwide have been conducted by those in human and physical sciences, with the least contribution coming from the social sciences. In the case of local studies in the Philippines, the reckoning for the perceptions of marginalized sectors on disasters, much less on climate change, are almost unheard of.

At the national level, policies must better reflect realities on the ground aided by sound research, both from the natural and social sciences. Researchers and development and extension workers of local academic institutions must be funded and capacitated so they can in turn help their communities improve their climate and development plans and access the appropriate response opportunities.

Planners and other officials should utilize research not only as additional socioeconomic agenda points but as a trigger to national and local policy direction. Moreover, to holistically address the risks of slow onset events, other adverse impacts of climate change, and loss and damage, governments must develop not just policies but pathways for climate finance to better reach locality-led and science-backed initiatives, in particular.

The UN climate conference in Bonn, currently underway, must deliver on loss and damage, adaptation and finance in response to the ever-growing urgency of climate action. The Warsaw International Mechanism on Loss and Damage, which was established just over two weeks after Haiyan struck the Philippines, must focus on finance. On the side, financial institutions and other stakeholders must also help establish other measures to manage the risks of SOEs.

Countries must likewise ramp up their climate action plans so as to not breach the 1.5 degrees Celsius warming threshold set out in the Paris Agreement. The most vulnerable ones must be given a fighting chance to survive and thrive amidst extreme weather events and creeping impacts alike.