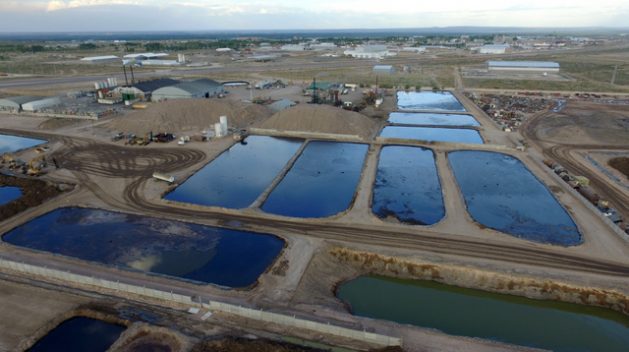 The Comarsa oil waste deposit in the southwestern province of Neuquén, in Argentina, parked a social conflict due to the environmental impact, which led to a promise that it would be shut down. The one planned for the municipality of Catriel, in the neighbouring province of Río Negro, would be almost 20 times larger. Credit: Fabián Ceballos / Oil Observatory of the South

BUENOS AIRES, Mar 1 2018 (IPS) - A project to install a huge deposit of oil field waste pits has triggered a crisis in the north of Argentina’s southern Patagonia region, and brought the debate on the environmental impact of extractive industries back to the forefront in this Southern Cone country.

Catriel, in the province of Río Negro, about 1,000 km southwest of Buenos Aires, was a small town untilan oil deposit was discovered there in 1959. Since then, the population has boomed, with the town drawing people from all over the country, driving the total up to around 30,000 today.

The conflict broke out in 2016, when the city government announced a plan to set up a “special waste deposit” on 300 hectares of land, for the final disposal of waste from oil industry activity in the area.

This generated social division and resistance that ended last November, when opponents of the project were successful in their bid to obtain an amendment to the Municipal Charter – the supreme law at a local level – which declared Catriel a “protected area”, and prohibited such facilities due to the pollution.

"The establishment or installation of nuclear power plants, reservoirs, landfills, repositories of final or transitory disposal of contaminated material from the nuclear, chemical or oil industry, or any other polluting activity, is prohibited." -- Municipal Charter of Catriel

Mayor Carlos Johnston described the modification of the charter as “shameful” and asked the courts to overrule the amendment, arguing that those who drafted the new text overstepped their authority.

The court decision is still pending.

“At all times it was practically impossible to access information. When we went to ask, the city government gave us a document that had a map of where they want to install the plant and practically nothing else,” said Natalia Castillo, an administrative employee who is part of the Catriel Socio-Environmental Assembly, a community group that emerged to fight the project.

“We are very worried about the possible impact of the plant and we are trying to raise public awareness. The problem is that many people around here work in the oil industry and prefer not to meddle with this issue,”Castillo told IPS.

Mayor Johnston confirmed his position to IPS: “We have had environmental liabilities since 1959. It is our obligation, as the State, to address them. It would be much worse not to do it.”

“The environmental authorisation came from the provincial authorities. It may be that we have so far failed to provide enough information to society. But we value the work of environmental organisations and are ready for dialogue because this project is necessary,” he added.

Johnston said the waste that will be accepted at the plant will come from Catriel and other municipalities in the province of Río Negro.

However, environmental organisations suspect, due to the large size that is projected for the deposit, that it could receive waste from oil industry activity in the entire area and not just from the municipality.

Catriel happens to be located in the so-called Neuquén Basin, the main source of oil and gas in the country, and is very close to VacaMuerta, the unconventional oil and gas deposit in the neighbouring province of Neuquén, which fuels Argentina’s dreams of becoming a major fossil fuel producer.

The United States Energy Information Administration (EIA) estimated the recoverable reserves in the 30,000-square-km Vaca Muerta at no less than 27 billion barrels of oil and 802 trillion cubic feet of gas.

The Argentine government also places its hopes in this field to bolster its hydrocarbon production, which has been declining for 20 years, and has forced the country to import fuel to make up for the deficit.

“The problem is that ‘fracking’, which is used to extract unconventional hydrocarbons, generates waste on a much larger scale than conventional exploitation,” said Martín Álvarez, a researcher at the non-governmental interdisciplinary Oil Observatory of the South (OPSur).

He explained that with this technology, which drills rocks at great depths through large injections of water and additives, “not only do the chemicals used to carry out the drilling and hydraulic fracturing come back to the surface, but also radioactive materials of natural origin that are in the subsoil.”

“There is a saturation of oil waste in the Neuquén Basin from fracking, which is a dirty technique. Then came this new business, waste disposal, which has a huge environmental impact because contaminants can seep into the groundwater,” added the expert.

Together with the Environment and Natural Resources Foundation and Greenpeace Argentina, two of the most influential environmental organisations in the country, OPSur requested access to information from different provincial bodies in Río Negro.

In addition, it issued a critical report, drawing attention to the size of the project. Covering 300 hectares, it would be almost 10 times larger than what is currently the biggest South American plant of its type, with an area of 34 hectares.

The document refers to Comarsa, an oil waste deposit that is only 135 km from Catriel, in the province of Neuquén, near the provincial capital. The installation has been questioned for years by residents, forcing the local authorities to promise to close it once and for all last November, although it has not yet happened.

The environmental organisations also complained that during the Mar. 31, 2017 public hearing where the project was discussed, many questions and objections raised by the participants were not answered.

They also questioned the approval of the environmental impact assessment conducted by the Rìo Negro Secretariat of Environment, “despite the rejection by different sectors in the community of Catriel.”

In the middle of this conflict, Catriel had to reform its Organic Charter, a task that is to be carried out every 25 years.

With the issue of the plant at the centre of the debate, the local ruling party, Juntos Somos Rio Negro (Together We Are Río Negro) won the elections with 35 percent of the vote and obtained six seats on the reform committee. But the other nine seats went to different opposition parties, which joined forces against the waste pit project.

“The establishment or installation of nuclear power plants, reservoirs, landfills, repositories of final or transitory disposal of contaminated material from the nuclear, chemical or oil industry, or any other polluting activity, is prohibited,” says Article 94 of the new Charter, which came into force on Jan. 1.

But the mayor argues that it must be revised because “it is not feasible.”

Johnston also rejected the possibility of calling a referendum on the authorisation to install the plant, as requested by the Catriel Socio-Environmental Assembly.

In a communiqué, the assembly asked: “What will happen when diseases become visible in the people who live in Catriel, due to the environmental contamination caused by the oil waste deposit?”

A fact that has not gone unnoticed is that the company that is to install the treatment plant is Crexell Environmental Solutions, which has strong political connections, to the point that its president, Nicolás Crexell, is the brother of a national senator for Neuquén, and nephew of the person who governed that province until 2015.