GENEVA, Jun 1 2018 (IPS) - I have been entrusted by the Human Rights Council with the task of monitoring, reporting and advising on the negative impact on the enjoyment of human rights of unilateral coercive measures.

The United Nations has repeatedly expressed concern that the use of such measures may be contrary to international law, international humanitarian law, the UN Charter and the norms and principles governing peaceful relations among States1. 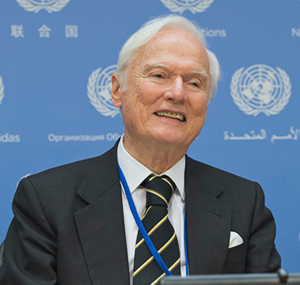 During my visit, I had the honour of being received by Ministers, Deputy Ministers and senior officials of the ministries of Foreign Affairs and Expatriates, Economy and Foreign Trade, Local Administration and Environment, Social Affairs and Labour, Transport, Agriculture and Agrarian Reform, Electricity and Health.

I also met with the leadership of the Planning and International Cooperation Commission, the Central Bureau of Statistics, the Chamber of Commerce, and with the Governor of the Central Bank.

I was briefed by staff from civil society, humanitarian organizations and by independent experts. Last but not least, I am also grateful to the numerous diplomatic missions that shared their views with me during my visit. I very much appreciate the briefings I received from the United Nations Economic and Social Commission for Western Asia in Beirut prior to my visit.

The purpose of this mission was to examine to what extent unilateral coercive measures targeting the Syrian Arab Republic impair the full realization of the rights set forth in the
Universal Declaration of Human Rights and other international human rights instruments.

I will present my full report to the Human Rights Council in September 2018. My present statement contains my preliminary observations on the outcome of my visit.

I have examined the situation of the Syrian Arab Republic as a target of unilateral coercive measures by a number of source States. I have examined relevant evidence and endeavoured to assess the actual impact of such measures on the Syrian people.

One source country has applied unilateral coercive measures since 1979, and they were strengthened in subsequent years. A larger group of States began applying similar measures in 2011.

The collective measures call for a trade ban on the import and export of multiple goods and services. It also includes international financial transfers. The superimposition of different packages of collective sectoral measures, together with the across-the-board implementation of financial restrictions, are tantamount in their global impact to the imposition of comprehensive restrictions on Syria.

Additional measures targeting individuals by virtue of their alleged relationship with the government have also been applied.

Because of their comprehensive nature, these measures have had a devastating impact on the entire economy and the daily lives of ordinary people. This impact has compounded their suffering resulting from the devastating crisis that has unfolded since 2011.

Singling out the impact of the unilateral coercive measures from that of the crisis is fraught with difficulty, but this does in no way diminish the necessity to take measures to restore their basic human rights as a whole.

It is clear that the sufferings imposed by the unilateral coercive measures have reinforced those that were caused by the conflict.

Indeed, it seems ironic that these measures applied by source States out of a concern for human rights are actually contributing to the worsening of the humanitarian crisis as an unintended consequence.

The dramatic increase in the suffering of the Syrian people

The Syrian economy continues to decline at an alarming rate. Since the application of coercive measures in 2011, and the beginning of the current crisis, the total annual GDP of Syria has fallen by two thirds.

Foreign currency reserves have been depleted, and international financial and other assets remain frozen. In 2010, 45 Syrian Liras were exchanged for one dollar; by 2017 the rate fell to fell to 510 liras per dollar. Inflation has dramatically increased since 2010, reaching a peak of 82.4% in 2013; the cost of food items rose eight-fold during this time.

This combination of factors visited further devastation on the living conditions of the population that were already degraded by the conflict. This has hit the half of working Syrians living on fixed salaries particularly hard.

This damage to the economy has had predictable effects on the ability of Syrians to realize their economic, social and cultural rights. Syria’s human development indicators have all tumbled. There has been a staggering increase in the rate of poverty among ordinary Syrians.

The most pervasive concerns I have heard during my mission relate to the negative effect that comprehensive financial restrictions have had on all aspects of Syrian life. Restrictions on the Central bank, state-owned and even private banks, and transactions in the main international currencies have comprehensively damaged the ability of anyone seeking to operate internationally.

Despite nominally including “humanitarian exemptions” they have proven to be costly, or extremely slow, to access in practice.

The uncertainty around what transactions do, or do not violate the unilateral coercive measures, have created a “chilling effect” on international banks and companies, which as a result are unwilling or unable to do business with Syria.

This has prevented Syrian and international companies, non-governmental actors (including those operating in purely humanitarian fields), and Syrian citizens from engaging in international financial transactions (including for goods which are legal to import), obtaining credit, or for international actors to pay salaries or contractors in Syria.

This has forced Syrians to find alternatives, such as hawala, which result in millions of dollars flowing through high cost financial intermediaries, who are alleged at times to be owned by terrorist organizations.

These channels which are not transparent, cannot be audited, and increase transaction costs remain the only avenue for smaller companies and Syrian civil society actors to operate internationally.

Syria practices universal, free health care for all its citizens. Prior to the current crisis, Syria enjoyed some of the highest levels of care in the region. The demands created by the crisis have overwhelmed the system, and created extraordinarily high levels of need.

Despite this, restrictive measures, particularly those related to the banking system, have harmed the ability of Syria to purchase and pay for medicines, equipment, spare parts and software.

While theoretical exemptions exist, in practice international private companies are unwilling to jump the hurdles necessary to ensure they can transact with Syria without being accused of inadvertently violating the restrictive measures.

While the security situation was a central factor which led to migration flows from Syria, it should be emphasized that the dramatic increase in unemployment, the lack of job opportunities, the closure of factories unable to obtain raw materials or machinery or to export their goods have all contributed to increasing the emigration of Syrians.

Some receiving States have selected skilled migrants, while pressuring the less fortunate to return to Syria. This “brain drain” has harmed the medical and pharmaceutical industries in particular, at the worst possible time for Syria.

The anticipated end of the current conflict will not put an end to the flows of migrants, especially to Europe, in view of the saturation of neighbouring countries.

These flows are likely to continue so long as the Syrian authorities are prevented by unilateral coercive measures from addressing the pressing problems related to their social and economic infrastructure, in particular the restoration of energy and water supplies.

Ban on equipment and spare parts

The ban on the trade in equipment, machinery and spare parts has devastated Syrian industry. Vehicles, including ambulances and fire trucks, as well as agricultural machinery suffer from a lack of spare parts. Failing water pumps gravely affect the water supply and reduce agricultural production.

Civilian aircraft are no longer able to fly safely, and public transit buses are in woeful condition. Whatever rationale source countries may have for restricting so-called dual use goods, greater effort is needed to ensure that goods that are clearly intended for civilian use are permitted, and that they can be paid for.

As a result of unilateral coercive measures, Syrians are unable to purchase many technologies, including mobile phones and computers. The global dominance of American software companies, technology companies, and banking and financial software, all of which are banned, has made it difficult to find alternatives. This has paralyzed or disrupted large parts of Syrian institutions.

Shortages of inputs, energy and water supply as well as of teaching material causing delays in the rebuilding of schools have kept 1.8 million children without access to their classrooms.

The ability of Syrians to participate in the international community has been sharply affected. Syrians have been excluded from international educational exchange programs, and the tremendous difficulties involved in obtaining a visa have prevented many from studying or travelling abroad, upgrading their training and skills, or participating in international conferences.

By removing consular services from Syria, countries have forced people including the poorest, to travel to neighbouring countries for such applications, which are also placing onerous restrictions on entry for Syrians.

I am profoundly concerned that unilateral coercive measures are contributing to the ongoing suffering of the Syrian people. Claims that they exist to protect the Syrian population, or to promote a democratic transition, are hard to reconcile with the economic and humanitarian sufferings being caused.

The time has come to ask whether these unintended consequences are now more severe than can be reasonably accepted by democratic States. Whatever their political objectives, there must be more humane means by which these can be achieved in full compliance with international law.

In view of the complexity of the system of unilateral coercive measures in place, there needs to be a multi-stage approach to addressing the dire human rights situation prevailing in Syria.

The second stage is to translate at the ground level effective measures to fulfil the commitment of source States to meet their obligation to allow humanitarian exemptions, particularly for financial transactions.

Finally, there must be a serious dialogue on reducing unilateral coercive measures, starting with those that have the most egregious effect on the population, along with those that will promote confidence building between the parties, with the ultimate aim of lifting the unilateral coercive measures. I hope that my report and my future work can contribute in this end.

*Based on the end-of-mission statement by the Special Rapporteur,and includes “preliminary observations and recommendations” on Syria.