World Wakes up to Climate Migration

Harjeet Singh is Global Lead on Climate Change at ActionAid International and is based in New Delhi*
Millions of people worldwide are being displaced by natural disasters triggered partially by climate change, and the international community is finally taking steps to mitigate the suffering 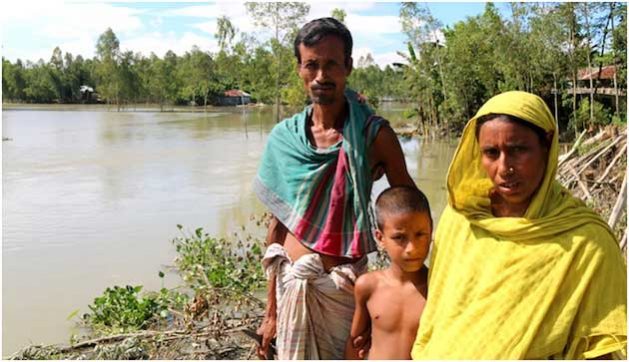 Sahara Begum of Nadagari village in Jamalpur district lost her home and all her assets to the 2017 floods in Bangladesh. Thousands like her now eke out a living in Dhaka and other cities. Credit: Md Sariful Islam / ActionAid

NEW DELHI, Jun 11 2018 (IPS) - This year is set to be an important milestone in the arduous journey of climate migrants. The global community is now beginning to fathom the challenges of people displaced by events such as floods, storms and sea level rise that are partly fuelled by climate change.

Natural disasters forced over 18 million people out of their homes in 135 countries just last year, according to a new global report released by Geneva-based Internal Displacement Monitoring Centre (IDMC). It highlights that weather-related hazards triggered the vast majority of the displacement, with floods and storms accounting for more than 80% of the incidents. China, the Philippines, Cuba and the US were the worst affected.

“Climate change is becoming a critical driver of displacement risk across the world, in combination with rapid and badly managed urbanisation, and increasing levels of inequality and persistent poverty,” Bina Desai, Head of Policy and Research at IDMC told indiaclimatedialogue.net.

The study further cites that hurricanes Harvey, Irma and Maria broke several records in the Atlantic and Caribbean, and a series of storms in South and East Asia and Pacific displaced large numbers of people throughout the year.

In South Asia alone, heavy monsoon floods and tropical cyclones have displaced 2.8 million, and in relation to its population size, the region has the highest disaster displacement risk globally. Bangladesh, India and Pakistan are among the 10 countries in the world with highest levels of displacement risk related to sudden-onset events.

In addition, displacement linked to slow-onset events such as sea level rise, desertification and salinisation are displacing millions more, particularly in the Sub-Saharan Africa and Pacific regions.

“No country is immune to climate change impacts anymore,” Sanjay Vashist, Director, Climate Action Network South Asia (CANSA), told indiaclimatedialogue.net. “South Asia has 22% of the world’s population but it houses 60% of the poor with the least capacity to confront increasing climate impacts.”

Millions of people in the Sundarbans — a unique mangrove ecosystem shared by Bangladesh and India — are already facing the brunt of rising sea and high intensity storms more frequently. These low-lying islands away from the global attention has already seen thousands being displaced, many of them permanently to inland cities, to eke out a living. See: Sinking Sundarbans islands underline climate crisis

It was the UN climate change summit in the Mexican city of Cancún in 2010 that for the first time recognised the relationship between climate change and different forms of forced human mobility.

It called on governments to “commit to measures to enhance understanding, coordination and cooperation with regard to climate change induced displacement, migration and planned relocation.” Decisions at the UN Framework Convention on Climate Change (UNFCCC) summits advanced the agenda in subsequent years. A high-level political boost came at the Paris summit in 2015.

The Paris Agreement not only acknowledged the rights of migrants but also gave a mandate to establish a Task Force on Displacement to provide recommendations to the Conference of Parties (COP), the apex body of the UNFCCC.

A year later, 193 nations at the UN General Assembly adopted the New York Declaration for Refugees and Migrants, recognising the need for a comprehensive approach to issues related to migration and refugees and enhanced global cooperation.

It decided to start the process in April 2017 to develop a “Global compact for safe, orderly and regular migration.” Since then, several consultations have been organised to gather inputs from various regions and stakeholders.

The on-going negotiations will be concluded this July and the General Assembly will then hold an intergovernmental conference on international migration in 2018 in Morocco to adopt the global compact.

Along the same lines, the International Organization for Migration (IOM) and the Platform on Disaster Displacement (PDD) jointly hosted a stakeholder meeting in May on behalf of the UNFCCC Task Force on Displacement.

More than 60 experts from governments, regional organisations, civil society and international organisations contributed in drafting recommendations to avert, minimise and address displacement in the context of climate change.

After the discussion in its forthcoming September meeting, the Executive Committee of the Warsaw International Mechanism for Loss and Damage will present the recommendations for adoption at the Katowice Climate Change Conference (COP 24) in December 2018.

“As climate change is already contributing to forced migration and displacement now and will continue to do so in the future, the recommendations of the Task Force can help develop a more prospective approach to managing displacement risk, including more equitable financing and risk reduction,” Desai told indiaclimatedialogue.net.

There is an on-going discussion to consider migration as an adaptation strategy and not just a desperate measure taken by people badly hit by climate impacts. The answer lies in analysing whether the recourse taken by climate victims offers them better quality of life or an unsafe situation devoid of identity and inadequate access to basic services like healthcare, shelter, sanitation and security.

“If we invest in climate action today, we reduce the risks of displacement due to climate change for future generations,” said Dina Ionesco, IOM Head of Migration, Environment and Climate Change division. “It will mean reducing losses and damages that occur when migration is a tragedy and a last resort.”

But, Ionesco added, “We also have to think migration policy and practice with innovative eyes, so as to see how safe and orderly migration can provide solutions and opportunities for people who are affected by climate change to move in a dignified manner.”

All eyes are now on the December climate summit in Poland, with a few rounds of talks in between, when both the UN processes involving almost 200 countries conclude, collectively aiming to protect the safety, dignity, human rights and fundamental freedoms of all migrants.

“Migration remains the only option left for people who permanently lose home and income to climate change impacts,” said Vashist. “The issue requires serious attention from our governments and the global community alike.”

*The views expressed by the author are personal.