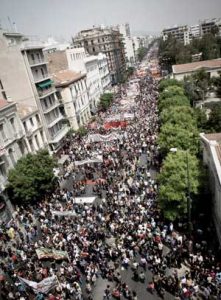 Demonstrations against austerity measures in Athens (May, 2010). Credit: Nikos Pilos/IPS

Demise of Keynesian consensus
In its immediate aftermath, a new consensus reversed the neoliberal Washington Consensus of the last two decades of the 20th century. Proclaimed by the G20’s London Summit of 2 April 2009, it envisaged return to Keynesian macroeconomic policies, including large-scale fiscal stimulus, supported by expansionary monetary policy.

The new policies were largely successful in tempering the recession, although much more should have been done. But with modest recovery, public debt, not economic stagnation, was soon sold as public enemy number one again.

Economists’ complicity
Misleading, ideologically-driven empirical analyses claimed to support the new policy reversal. Alesina and his associates promoted the idea of ‘expansionary fiscal consolidation’, that contractionary government expenditure cuts would be more than offset by private spending expansion due to boosted investor confidence.

Then, Reinhart and Rogoff exaggerated the dangers of domestic debt accumulation. Although soon exposed for major methodological flaws and suppressing relevant information, these studies had served their purpose.

The IMF Fiscal Monitor ahead of the June 2010 G20 Summit grossly exaggerated public debt’s destabilizing effects, advocating rapid fiscal consolidation instead. Later, the IMF admitted it had underestimated the fiscal multiplier and hence potential growth from such debt!
Faltering recovery and rising unemployment in the Eurozone caused the public debt-GDP ratio to rise instead. Meanwhile, supposedly unavoidable short-term pain caused prolonged suffering for millions without the promised medium- and long-term gains.

UN ahead of the curve
Besides the Bank of International Settlements’ legendary William White, the United Nations was ahead of the curve, not only in warning of the impending crisis, but also by providing appropriate policy advice, albeit largely ignored.

For example, the United Nations 2006 and 2007 World Economic Situation and Prospects (WESP) warned of instability and growth slowdowns due to disorderly adjustment of growing macroeconomic imbalances among major world economies. WESP warned that falling US house prices could cause defaults to spike, triggering bank crises.

The IMF and the OECD simply ignored such warnings, projecting rosy futures, and a ‘soft landing’ at worst. The April 2007 IMF World Economic Outlook (WEO) emphatically dismissed widely held concerns about disorderly unwinding of global imbalances, claiming economic risks had subsided. The July 2007 issue claimed: “The strong global expansion is continuing, and projections for global growth in both 2007 and 2008 have been revised up”.

The OECD June 2007 Economic Outlook insisted that the US slowdown was not heralding a period of worldwide economic weakness. “Rather, a ‘smooth’ rebalancing was to be expected, with Europe taking over the baton from the United States in driving OECD growth… Indeed, the current economic situation is in many ways better than what we have experienced in years.”

Although the IMF’s November 2008 WEO belatedly acknowledged the crisis’ severity, it forecast global recovery of 2.2% in 2009, suggesting the worst was over, thus supporting the reversal from fiscal expansion to consolidation. Depicting the ‘green shoots’ of recovery as self-sustaining, fiscal stimulus was abandoned after selective financial bailouts.

The IMF and OECD recommendations of structural reforms and fiscal consolidation have since failed to provide the long awaited, sustained global economic recovery.

The President of the UN General Assembly set up a commission led by Nobel laureate Joseph Stiglitz to study the crisis’ impact, especially for development, and recommend policies to prevent future crises. Yet, most remain unaware of its wide-ranging findings and policy recommendations, including international financial architecture reforms and reregulating finance to better serve the real economy.

Missed opportunity, heightened vulnerability
With UN and similar policy advice largely ignored, global economic recovery has remained tepid for the last decade. This has prompted the ‘secular stagnation’ thesis obscuring the role of political and policy failures and missed opportunities.

Having failed to ensure robust recovery despite accumulating more debt, both developed and developing countries have less policy and fiscal space to address the looming problems threatening them.

Also, the hyped notion of ‘inclusive inequality’ has served to justify rising economic disparities, by arguing that deregulation has enabled wealth accumulation and middle class expansion.