Lee Hoesung was appointed Chair of the Intergovernmental Panel on Climate Change (IPCC) in 2015. He is also the Endowed Chair Professor of economics of climate change, energy and sustainable development in the Republic of Korea*.

UNITED NATIONS, Dec 3 2018 (IPS) - When governments set a target in December 2015 of limiting global warming to well below 2ºC above pre-industrial levels while pursuing efforts to hold it at 1.5ºC, they invited the IPCC to prepare a report to provide information on this Goal. 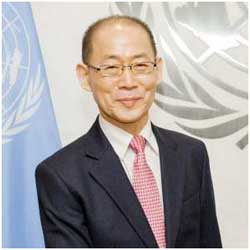 They asked the IPCC to assess the impacts of warming of 1.5ºC, the related emissions pathways of greenhouse gases like carbon dioxide that would result in warming of that amount, and the differences between warming of 1.5 and 2ºC or higher.

The new IPCC Special Report on Global Warming of 1.5ºC shows that it is not impossible to limit warming to 1.5ºC but that doing so will require unprecedented transformations in all aspects of society.

The report shows that this is a worthwhile goal as the impacts of warming of 2ºC on lives, livelihoods and natural ecosystems are much more severe than from warming of 1.5ºC.

The global temperature has already risen about 1ºC from pre-industrial levels. The report shows that because of past emissions up to the present it will continue to warm. But these emissions alone are not enough to take the temperature to 1.5ºC: it is still possible to hold it at that level.

This requires very strong cuts in emissions of greenhouse gases by 2030, for instance by decarbonization of electricity production, and further cuts after that so that emissions fall to net zero by 2050.

Net zero means that any continuing emissions of greenhouse gases, for instance in transport, are compensated by removing carbon dioxide from the atmosphere through measures such as afforestation or other techniques and technologies.

This will be achieved by reducing energy demand, for instance through greater energy efficiency, and changes in energy use, construction, transport, cities and food and diets.

Limiting warming to 1.5ºC is possible in terms of physics; the technology and techniques are there; the question is whether people and societies will support politicians in taking these measures.

What do world leaders need to know about the climate science that will affect the prosperity and well-being of their citizens?

World leaders need to know that the climate is already changing because of emissions of greenhouse gases like carbon dioxide from human activities such as energy production and use, transport, and agriculture and other forms of land use.

These changes pose threats to people from increases in extreme weather events such as heatwaves, forest fires, drought, heavy precipitation and floods. The warming climate is causing the sea level to rise.

It is affecting biodiversity and making it harder for species to survive or forcing them to move. These are already affecting people’s lives and livelihoods.

If we carry on emitting greenhouse gases the climate will continue to warm and these threats will get worse. The new IPCC report shows there is even a big difference in risks between warming of 1.5ºC and 2ºC: every bit of warming matters.

The report also shows that it is pursuing policies to address climate change, by reducing emissions and adapting to the changes already underway, can creates a more prosperous and sustainable society by fostering innovation and the green economy and building more resilient communities. Economic development and climate action go hand in hand as sustainable development.

How optimistic are you about our ability to limit global warming to 1.5 C?

The new IPCC report shows it is not impossible, in terms of physics or technology, to limit global warming to 1.5ºC. But the unprecedented transformations in society will require continuing technical innovation and changes in behaviour and lifestyle.

The question is whether individuals and companies are ready to make those changes and encourage politicians to put the conditions in place to create a prosperous and sustainable low-carbon society.

*Originally published by the SDG Media Compact which was launched by the United Nations in September 2018 in collaboration with over 30 founding media organizations –– encompassing more than 100 media and entertainment outlets. The SDG Media Compact seeks to inspire media and entertainment companies around the world to leverage their resources and creative talent to advance the Sustainable Development Goals.

World leaders are meeting at the Climate Conference (COP24) in Katowice, Poland, 2 to 14 December, to finalize the rulebook to implement the 2015 landmark Paris Agreement on climate change. In the agreement, countries committed to take action to limit global warming to well under 2°C this century. At the conference in Poland, the UN will invite people to voice their views and launch a campaign to encourage every day climate action.