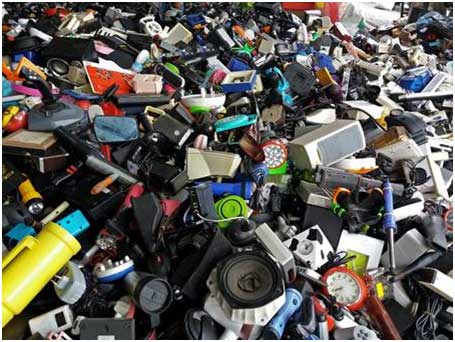 UNITED NATIONS, Jan 24 2019 (IPS) - The widespread innovations in modern digital technology have a devastating downside to it: the accumulation of over 50 million tonnes of electronics waste (e-waste) globally every year.

And that’s greater in weight than all of the world’s commercial airliners ever made, or enough Eiffel Towers to fill the borough of Manhattan in New York city, warns a new report released at the World Economic Forum (WEF) in Davos, January 24.

If nothing changes, the United Nations University (UNU), one of the authors of the report, predicts e-waste could nearly triple to nearly 120 million tonnes by 2050.

The study says it is difficult to gauge how many electrical goods are produced annually, but just taking account of devices connected to the internet, they now number many more than humans, whose total world population now stands at over 7.7 billion.

The joint report, titled “A New Circular Vision for Electronics – Time for a Global Reboot“, and backed by seven UN agencies, points out that rapid innovation and lowering costs have dramatically increased access to electronic products and digital technology, with many benefits.

This has led to an increase in the use of electronic devices and equipment. And the unintended consequence of this is a ballooning of electronic and electrical waste.

The study says e-waste is now the fastest-growing waste stream in the world. Some forms of it have been growing exponentially.

Asked how feasible is it for countries to have mandatory legislation on recycling e-waste, Dr. Ruediger Kuehr, co-author of the report and Director, UNU-ViE SCYCLE, Sustainable Cycles Programme, told IPS mandatory e-waste recycling legislations are in place, for example, in the European Union (EU).

As per such, 85% all e-waste generated in the EU must be recycled in 2019. However, this target is not going to be reached at all, he noted.

Hence, he said, e-waste recycling legislations must come together with innovative and rewarding collection systems; consumer awareness (for example, not for storing obsolete equipment at home, but returning it early on) but also new systems to consume electronics such as dematerialization — purchasing the service instead of the product.

This will ease collection, because the ownership of the product would remain with the producer, he added.

He also said such systems are necessary in the long-run, because extend-collection systems by returning equipment with retailers; recycling points or collection bins have proved to be key, but do not provide the necessary breakthrough.

‘In consequence, the pure e-waste legislation will not change things, especially also because in many countries their enforcement is lacking,” Dr Kuehr warned.

In terms of material value, says the study, e-waste presents an opportunity worth over 62.5 billion dollars per year, more than the GDP of most countries and three times the output of the world’s silver mines.

There is 100 times more gold in a tonne of e-waste than a tonne of gold ore, according to the report.

The study calls for a new vision for electronics based on the circular economy and the need for collaboration with major brands, small and medium-sized enterprises (SMEs), academia, trade unions, civil society and associations, in a deliberative process to change the system

The Coalition is supported by the World Business Council for Sustainable Development (WBCSD) and the World Economic Forum and coordinated by the Secretariat of the Environment Management Group (EMG).

Asked if the issue of e-waste should be on the agenda of the UN General Assembly in order to motivate firm commitments from the 193 member states, Dr Kuehr told IPS that some stakeholders in politics and industry are of the standpoint that the e-waste issue is sustainably solved, though all numbers speak a different language and are alarming.

And though e-waste has moved up on the political agenda, also within the UN, it is still regarded as a niche issue. International and globally harmonized attempts, partly revolutionary, are required for sustainable solutions, he argued.

“And the UN General Assembly could play an important role in taking the discussion to the next level, also illustrating the urgency for regional and national action.”

“But we must also take further attempts in greening the blue, by also re-considering our UN internal consumption of electrical and electronic equipment”.

Seeing the UN as a large consumer, he said, “we can have a say in what products and services we want from the producer. But so far, it is hardly reflected.”

However, national governments, companies and other stakeholders must do substantially better in researching the e-waste challenge and coming up with sustainable solutions, declared Dr Kuehr.

Meanwhile the study cites several concrete examples in the battle against e-waste in a “circular economy”.

The Nigerian government, the Global Environment Facility (GEF) and UNEP have jointly announced a $2.0 million dollar investment to kick off the formal e-waste recycling industry in Nigeria. The new investment will leverage over $13 million dollars in additional financing from the private sector.

According to the ILO, upto 100,000 people in Nigeria work in the informal e-waste sector.

This investment is expected to help create a system which formalizes these workers, giving them safe and decent employment while capturing the latent value in Nigeria’s 500,000 tonnes of e-waste.

UNIDO is collaborating with a large number of organizations on e-waste projects, including UNU, ILO, ITU, and WHO, as well as various other partners, such as Dell and the International Solid Waste Association (ISWA).

In Latin America and the Caribbean, a UNIDO e-waste project, co-funded by GEF, seeks to support sustainable economic and social growth in 13 countries.