Branislav Gosovic worked in UNCTAD, UNEP, UNECLAC, World Commission on Environment and Development, South Commission, and South Centre (1991-2005), and is the author of the recently-published book ‘The South Shaping the Global Future, 6 Decades of the South-North Development Struggle in the UN.’ 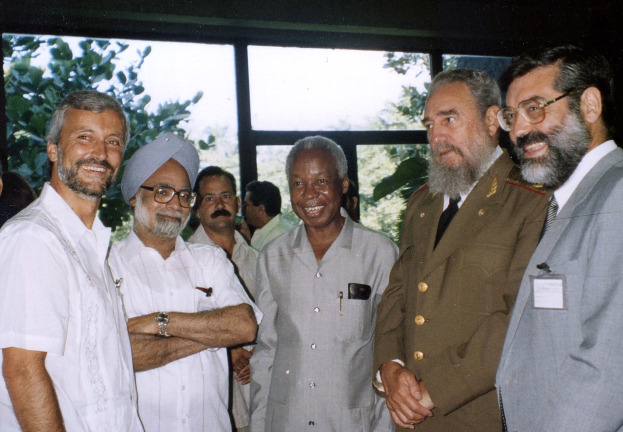 GENEVA, Feb 18 2019 (IPS) - Initially, in its BAPA+40 follow-up, the Group of 77 should address – in its own circle and in a comprehensive manner – the challenges and opportunities facing South-South cooperation.

The BAPA+40 Zero Draft Outcome Document—to be adopted at the upcoming conference on the Buenos Aires Plan of Action (BAPA+40) in Argentina March 20-22– is much like a conference report intended to accommodate different points of view.

It is neither a visionary policy nor substantive action-oriented agenda needed to bolster South-South cooperation (SSC) and give it greater importance in the United Nations system, which would normally be expected from a once-in-a-decade high-level UN conference.

Having been drafted carefully to take into account views and sensitivities of the developed countries, which have not been overly enthusiastic about South-South cooperation, the document could not give adequate prominence to preferences and position of developing countries, the major interested party and leading force of that cooperation.

Initial comments on and reactions to the Zero Draft reflect continuing disagreements and underlying policy differences between the South and the North regarding the nature and objectives of South-South cooperation.

Given – (a). the contents and policy limitations of the Draft Outcome Document, which largely delimit the final outcome of the Conference; (b). the traditional misgivings of the developed countries about SSC and their efforts to constrain its development; (c). the political and institutional obstacles that limit the UN role and engagement of its staff in promoting SSC; and (d). the absence of a comprehensive, up-to-date South platform for SSC and the differences that exist among the South’s large and diverse constituency – the Group of 77 would do well already now to begin preparing for the period following BAPA+40.

Initially, in its BAPA+40 follow-up, the G77 should address – in its own circle and in a comprehensive manner – the challenges and opportunities facing South-South cooperation.

Taking into account the outcome of the 2019 Buenos Aires Conference and the lessons learned during its preparatory process, proceedings and negotiations, a new effort should be undertaken to elaborate a G77 South-South cooperation policy platform and agenda for action.

Both Conferences were part and parcel of the Global South’s New International Economic Order (NIEO) initiatives during that period. The Caracas event had to be organized outside the UN, but it relied on logistical and substantive support of the UNCTAD Secretariat.

The goal was to carry on with the process beyond what had been possible to achieve in Buenos Aires and in the framework of the UN itself. The Caracas Programme of Action on Economic Cooperation among Developing Countries (A/36/333) was adopted.

It broadened the concept to incorporate “economic cooperation among developing countries” beyond the politically and substantively restricted “technical assistance”, projects-centred approach dealt with in Buenos Aires (A/CONF.79/13/Rev.1).

However, the concept of ECDC could not properly be institutionalized in the UN framework due to the opposition of the developed countries. Indeed, in the institutional-reform sweep in the 1990s, driven and inspired by these countries, even the UNCTAD Unit on ECDC was closed.

As part of its continuing initiative in the UN, the Group of 77 began to champion a broader concept, namely “South-South cooperation”, elaborated in the 1990 Report of the South Commission, The Challenge to the South. In 1994, G77, in its Ministerial Declaration, urged the UN to convene an international conference on South-South cooperation in 1996.

This non-committal wording reflected the lack of developed countries’ support for the idea. And, in fact, it took nearly 15 years before such a conference could be held in the UN – the 2009 Nairobi High-level Conference on South-South Cooperation – and before the concept of South-South cooperation was anointed in this Organization.

One can argue that the suspicion harboured by key actors in the North vis-à-vis SSC has not basically changed, even though these countries now exhibit a greater tactical flexibility due to the changing realities, including the emergence of and the challenge posed by “the rising South”.

Given the differences of outlook between the North and the South, and political and administrative constraints that UN organizations and staff experience in their work to advance the process of South-South cooperation and to assist the developing countries in this domain, a satisfactory outcome of the three-day BAPA+40 North-South encounter does not seem likely from the point of view of the Group of 77.

It would, thus, be propitious for the Group to begin considering a similar approach to the one it had adopted after the 1978 Buenos Aires TCDC Conference, when it decided to hold its own ECDC conference in 1981 in Caracas.

In view of the existing situation, possibly in the final stage of the 2019 Buenos Aires Conference, the Group of 77 should highlight the coming 40th anniversary of the 1981 Caracas Conference by announcing the launching of its own South-South follow-up, as a sequel to BAPA+40.

In this way, G77 and its member states would commit themselves to review and formally consider the nature of South-South cooperation and its role in development and in the evolving geopolitical setting.

This would be a collective undertaking, pursued within one’s own circle and policy space, with the goal being to elaborate a Global South’s policy and action-oriented agenda for South-South cooperation, without the developed countries present to influence the parameters of that cooperation.

While centred on SSC actions and needs within the Global South, the proposed follow-up would also need to address, as a separate issue, the role of the UN and UN system in actively supporting South-South cooperation, as an important dimension of international development cooperation and, indeed, of democratic global governance.

Two events already on the agenda could contribute to the follow-up process in the initial stage. The Group of 77 ministerial conference, planned to mark the 55th anniversary of the Group’s establishment, could consider SSC issues and follow-up to BAPA+40, including the re-launching of some ideas and projects agreed on in the past but not implemented.

Also, as suggested by the G77 Geneva Chapter in its comment on the Zero Draft, the next quadrennial UNCTAD conference, UNCTAD XV in 2020, will be an opportunity to pave the way for a far more active policy and substantive and action-oriented role of the UN by entrusting UNCTAD with some key domains of SSC.

These include ECDC, trade, finance, investment, technology, services, and regional and sub-regional integration, in which it had played an important and pioneering role in the past.

UNCTAD XV would also be an appropriate forum where to consider the larger institutional issue, namely of a leading role that UNCTAD, in partnership with and the support of the UN regional economic commissions and the South-South economic groupings, could play in spearheading and energizing the role of the UN and UN system in support of SSC.

When considering a possible G77 follow-up process to BAPA+40 and how to deal with shortcomings and weaknesses that have affected SSC and how to reinvigorate it in the coming period and beyond, the issue that merits priority attention is the need for institutional self-empowerment of the Global South, which is seriously handicapped by not having its own global institution, one similar to the North’s OECD.

A strong organization of the South is a sine qua non of the necessary drive and long-term institutional leadership and focus for the evolving process of South-South cooperation.

This institutional deficiency cannot be overcome by relying solely on the UN, especially in its present vulnerable situation when it is under the pressure of the key developed countries. Nor can one expect this function to be undertaken by individual developing countries.

A collective self-organization at the global level is of utmost priority and importance, including for a common review of the problems and challenges faced, for distilling common views and positions, and for the participation of all countries of the Global South.

BAPA+40 and its follow-up process in the fold of the Group of 77 would provide a political impulse to inaugurating a vital action for establishing an organization that would serve as the Global South’s own lead mechanism in the promising and all-important domain of South-South, as well as international and multilateral cooperation, an organization that would work in parallel with, complement and stimulate the efforts of the UN family as a whole.

A decision to establish a major, significant global organization of the Global South for South-South cooperation would represent a landmark event on the world scene.

In conclusion, it can be argued that, despite problems and political tensions within the South, between and within its countries, often with the involvement of actors from the North, and also despite crises in the global economy and turbulences in the multilateral system of international cooperation, the overall context today is favourable for South-South cooperation.

On the geopolitical front, the spread of right-wing populism and the migrant crisis, as well as major political and economic changes in the North, are reflected in the mounting global interventionism, the negative attitude towards the developing countries’ aspirations, and the disregard for multilateralism and values on which the United Nations is founded.

This will require of the developing countries actively to seek solutions through South-South cooperation, collective self-reliance, solidarity, an overarching political stance and initiatives regarding global concerns and issues.