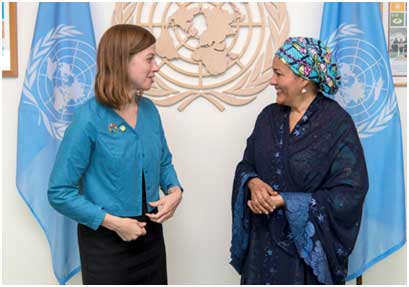 UNITED NATIONS, Jul 22 2019 (IPS) - Finland has garnered attention for its top-notch education, and the newly appointed Minister of Education for Finland is planning to continue with the success of her country’s education system through various and innovative approaches.

“In education, Finland has the lead according to many international comparisons,” Li Andersson, the newly appointed Minister of Education for Finland, said at a briefing at the Finnish consulate in New York on July 19.

Most recently, she pointed out, the London-based Economist ranked Finland as number one in delivering future-oriented skills through education.

“Thereby, Finland is best equipped to adapt education system to deliver skills for problem-solving and collaboration, as well as foster creativity, civic-awareness and participation,” she added.

The briefing was hosted by the Consulate General of Finland, with a guest speaker from Columbia University.

Andersson said investment in education is key to all of the successes “we have seen in Finnish society, so it is key for social cohesion, it is key for equality, and it is key for building economic progress and for economic growth.”

Finland has been ranked as one of the happiest and most successful countries in the world, and most recently was ranked as the number one country for higher education by The Economist.

In terms of what other countries, such as the United States should learn from Finland, Dr. Samuel E. Abrams, director of the National Center for the Study of Privatization in Education at Teachers College, Columbia University had this to say: “We should follow Finland in testing only small samples of students rather than testing all students”.

“Our approach forces teachers to teach to the test. As we test all students in reading and math in grades 3-8, we generate undue stress for students, teachers, and parents alike”.

Moreover, he pointed out, “in focusing on reading and math, we crowd out time for history, science, music, art, crafts, and physical education. And students need those subjects as well as plenty of play for a well-rounded education.”

“Second, we should follow Finland in preparing teachers with high-quality master’s programs in pedagogical theory and practice.

“Third, we should follow Finland in paying teachers well and giving them significant autonomy,” he added.

“Finally, we should follow Finland in funding our schools fairly. That means more money per student at schools in disadvantaged neighborhoods, not less. We base funding on property taxes, which means wealthy districts have significantly more money to spend per pupil than poor districts”.

“None of this is rocket science,” he said. “But that does not make it easy.”

Dr. Abrams concluded: “We must follow in Finland’s path in altering the way we think about children and their future. This requires, one, thinking about child development through the eyes of the child, which means a well-rounded curriculum; two, reconceiving our social contract to ensure a high-quality education for all children; and three, esteeming teachers as pillars of the community.”

“There is a difference between boys and girls and also some growing regional differences, and also a stronger difference where the pupils home background will affect the learning results more than before.”

To combat these worrisome findings, Andersson and the Finnish government have set three main priorities to be tackled in the coming years.

“The first of these priorities is raising the educational level of the whole population.” Andersson said.

“The second priority of the government is reducing inequality gaps in education referring to what I said about earlier about the worrisome trends, and the third priority is focusing on continuous education…. learning should be something that we do all the time, and we should have the possibility to engage in all the time, no matter whether if we are working or outside working life or studying.”

For raising the level of education, Andersson plans on ensuring that all students have a degree on the upper secondary level and plans on raising the amounts of adults on the third educational level (post-secondary education) to 50% by 2030.

In order to implement this, Andersson intends on devising a Road Map, and a document that will reach Parliament.

She also highlighted the importance of addressing the equality gaps and strengthening the whole Finnish education system, from early childhood education to primary school.

She also intends on raising the compulsory education age to 18 years old. “16% of the overt generations in Finland are without a degree on the secondary level.” She noted.

“We know that the employment rate of people with only primary education backgrounds is around 40% at the moment, and that has been going down all the time.”

She cited the changing labor market, and how that calls for a change in the education system.

In terms of closing education gaps, Andersson cited a significant focus on early childhood development, as that is key.

Such actions to help assist this goal is to reduce group sizes for children over 3 years old and ensuring that every child has the right to at least 40 hours a week to early childhood education and care “no matter if their parents are working or unemployed.”

Andersson is also piloting a two- year preschool to see how it will affect participation rates in early childhood care, as well as to observe the effects it will have on learning results in primary education.

Furthermore, Andersson plans on providing support for maternity and childhood clinics.
For continuing education and the future of work, Andersson is unsure, as the labor market is drastically changing but noted that “It is clear that the knowledge requirement will grow.”

“Education is the best tool we have, and we should think of it as an investment not an expenditure.” She concluded.

She added that students should “just focus on things you’re motivated about, not too get too stressed, I think it is a shame there is a lot of pressure on the students now, with their stress with finances etc.”

But she offered encouragement and stated that students should “not think too much about what government is saying about how fast you should study and finally, “use the possibilities you have at the university”